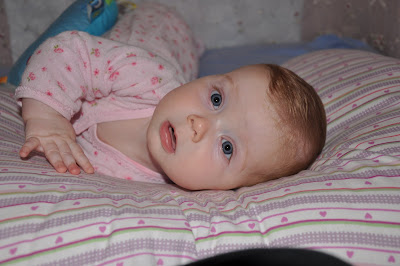 Rachel had a follow up appointment with the pediatrician this morning regarding her RSV and bronchiolitis infection. The nurse weighed her and she is 16 lbs, 8.5 oz! I'm not surprised. She can already wear some clothes for a 9 month old and she's only 5 months old! The pediatrician was pleased that her lungs sounded clear but she does have an ear infection in her right ear - which explains why she hasn't been nursing as much. She will continue the breathing treatments for another week and then we'll stop and see how she does. She also has to start a round of antibiotics to fight the ear infection. I have to use a little syringe to squirt it in her mouth and half the time the pink goo drools right back out of the corners of her mouth. I only have to deal with that fun event twice a day for 10 days. Ugh!

She is getting a little more tolerant of the breathing treatments. She will fuss and squirm a little at first but she usually calms down when I sing softly to her. Sometimes she will even drift off to sleep during the treatment if I sing to her. She likes to hold the nebulizer piece and mask that are up against her face. Sometimes I catch her slowly trying to pull it away from her face. Sneaky little girl! Other times she tries to chew on the mask while it is still spraying her medicine out. I tell you, she will chew on anything if it's close enough to her.

We are supposed to follow up with the doctor regarding the shape of her head at the 6 month well exam. But since I was meeting with him anyway, I mentioned to him that the ridge on the top of her head seems to be unchanged from her 4 month visit. The doctor still seems to think that it will fix itself over time. However, we don't want to wait too long in getting another opinion because if she does need treatment it is optimal to do that around the 6-7 month time frame. He gave us a referral to see a cranio-facial surgeon in Dallas named Dr. Jeffrey Fearon, not necessarily because he thinks she needs surgery but because this doctor is a specialist in treating cranial issues like this.

I called his office and spoke with the receptionist. Of course, he is in such a specialized field that he doesn't have to be on any insurance plan so he would be out of network for us. I also spoke with his nurse and explained a little about Rachel's condition. The little ridge on her head starts at the hairline in the middle of her forehead and extends back just an inch or two to the soft spot. She explained that this ridge is the metopic suture where the two front plates of the skull come together. The plates aren't fully connected at birth to allow the baby's head to adjust some as it goes through the birth canal. Over time though the plates do fuse together. Sometimes if the plates fuse together a little too soon, these ridges will form. In more extreme cases, the soft spot closes too soon and the entire shape of the skull can become deformed. If the sutures close too soon, it could cause pressure on the brain as it grows and that can obviously cause serious problems.

We aren't concerned about this with Rachel since her case doesn't appear to be severe. Her ridge is not visible when looking at her. You can't see it on the front of her forehead and her head seems to be shaped normally. You have to feel on the top of her head to know that it's there at all. Her soft spot is open which is good because it should be at this age. The pediatrician has been checking her head size and it is still growing at a healthy rate. The nurse at Dr. Fearon's office gave me their website address where I could see a picture of a child with a much more severe case than what Rachel has. You can click HERE to see it. The most obvious feature with these cases is that the forehead starts to form a triangle and from the top-down view it looks like the bow of a boat. So I looked at Rachel's forehead from above and it seems to be normal. 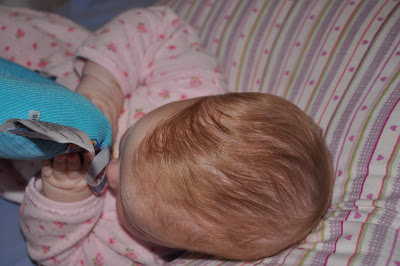 With all of this in mind, we certainly aren't expecting that she'll need surgery and the nurse on the phone said that she probably wouldn't need any treatment at all as it will likely improve on its own. However, we will probably still meet with the doctor and let him examine her, just to be sure.

Stuart happened to overhear a co-worker talking about his son's similar condition. However, this boy's condition was worse because the soft spot had closed and he had to have surgery. The dad said that they sought out the best treatment for their son and even travelled up to Chicago for a consult with a specialist in the field. But the doc in Chicago said that Dr. Fearon in Dallas is a top specialist and he would take his child to him if needed. So at least we know we've found a great doctor to evaluate her.

Rachel is really doing great. She is such a happy baby. She smiles and laughs all the time, especially when Nicholas is talking to her or playing with her. Just this week she has started making new babbling sounds - more vowels and two or more sounds strung together. She also seems to mimic the rhythm of my voice. Today I put her down for a nap and in a sing-song type voice I said, "Love you". She replied in babble but with the same sing-song rhythm that I had used. It was so sweet. She has also been doing lots of raspberries and trying to make different sounds with her tongue.
at March 25, 2009
Email ThisBlogThis!Share to TwitterShare to FacebookShare to Pinterest