I feel like we need to have a graduation ceremony for Rachel. She has successfully completed Mommy's Baby Bottle Boot Camp. Yes, our four month old baby has FINALLY drank from a bottle. Woo hoo! Let the balloons and streamers fall from the ceiling!

I started trying to get her to drink from a bottle about a month or so ago when Stuart and I were hoping for a date night for dinner and a movie. We put my milk in the bottle instead of formula because that it what she is used to. But she didn't care. She just screamed her little head off and wouldn't have anything to do with a bottle. We know some of the milk was dripping into her mouth so she could taste what it was but again, she didn't care. The crying really got to me but I kept trying. We tried and tried and she just cried and cried. She went 6 hours one time before I gave in and nursed her. She's a stubborn little one.

So I thought maybe I'd try some different bottles. Maybe it's just the particular style of the bottle I was using. So I went to Babies R Us and bought a few bottles, including two specialty bottles that are specifically designed to be similar to breastfeeding. Nope, those didn't work. Then a friend of mine heard of my predicament and asked, "But have you tried the $13 bottle?" I told her no but I was intrigued. She let me have two of her bottles. I was so excited. Surely my baby will take this bottle. It's a $13 bottle. It's got to work!

More crying ensued (oh, and Rachel was crying too!). I decided that it was time for Baby Bottle Boot Camp. I worked up a supply of my milk to keep in the fridge and every day I would offer her a bottle. I would give it to her when it was close to time for her to eat but before she was getting antsy for food so she was calm but a little hungry. She would often start out happy and would gnaw on the nipple a little as if it was a teething toy. It seemed to actually interest her. But eventually she would get aggravated by it and her growing hunger and then the crying would start. I would change to a different bottle then try some more and change to another bottle and try again. I did this every day for about 2 weeks. It was a rough boot camp but she eventually started wrapping her lips around the nipple but not really drinking it. Then one day it just clicked and she figured it out. Now she'll take a bottle although she likes to grumble a little in the begining just to let me knows that she is not a big fan of this method of delivery. At least I can rest easy knowing I can leave her with Stuart for more than 3 hours and not have to rush back home to feed her myself. What freedom! 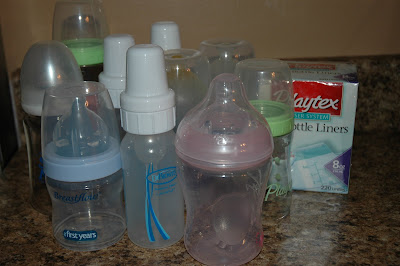 at March 07, 2009
Email ThisBlogThis!Share to TwitterShare to FacebookShare to Pinterest