A Trip to the Emergency Room

What an afternoon it has been! I picked Nicholas up from school and we got some groceries to make jambalaya for dinner tonight. As I was unloading the groceries, I heard Nicholas cry out from inside the house. I'm not sure how it happened but he fell into the corner of the wall and gashed his head really bad. Lots of blood and, to my untrained-mommy-panicked eye, it looked like the cut was deep enough to see the bone underneath!

So we rushed off to the emergency room. Nicholas was crying and holding a towel to his head to control the bleeding and Rachel was starting to get fussy for a feeding and a nap. I got to the ER and had to carry my 45 pound little boy with one hand while I pushed Rachel in the stroller with the other hand from the parking lot, up the ramp, and into the ER waiting room. There's no limit to what a mom can do when she has to! But I have to admit that I was so relieved when Stuart showed up at the ER!

Here's my brave little guy as we were waiting for the doctor to come see him. 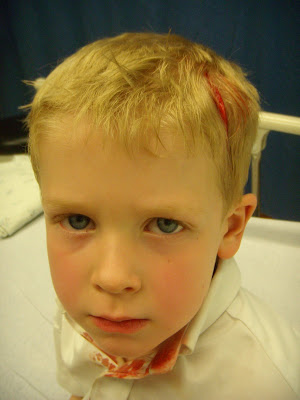 The nurses put some kind of liquid anesthesia on the wound, covered it with a bandage, and said that it would feel numb in about 30 minutes or so. Then she gave him some stickers. Nicholas was very brave and handled himself like a courageous big boy. The purple popsicle might have helped too! 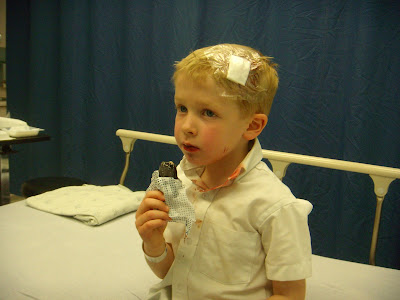 Nicholas ended up getting 7 staples in his scalp and they will stay in for about a week. 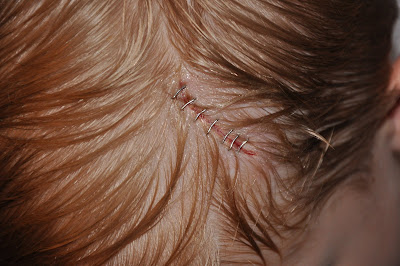 After the procedure, the nurse brought him more stickers and some vanilla ice cream. As we were leaving, I noticed that the corners in the hospital have these nice padded edges. I wonder if we should look into getting these in our house to prevent future trips to the ER. Hopefully they come in other colors... 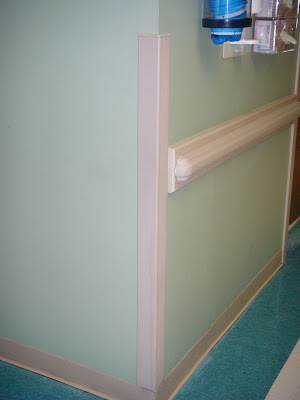 at March 04, 2009
Email ThisBlogThis!Share to TwitterShare to FacebookShare to Pinterest