Avast, me hearties!  Today be International Talk Like a Pirate Day.  Aye mateys!

The kids are having fun at Mango Languages website this morning.  Mango Languages is a real site for learning foreign languages online but they are having a bit of fun today with a special link to their Learn to speak Pirate page.

Apparently you must make lots of funny faces in order to truly speak pirate! 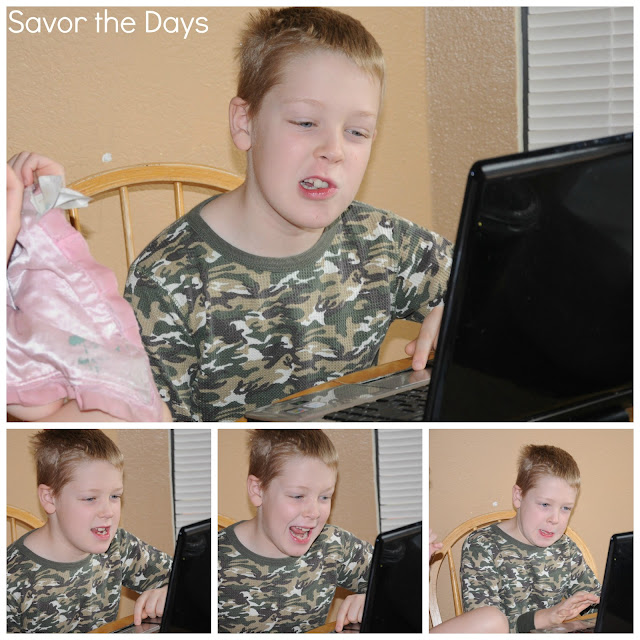 There are some cool deals today in honor of Talk Like a Pirate Day.

Long John Silvers - Talk like a pirate and get free fish.

You can even change your Facebook language to pirate for today.  I haven't tried this but here is what I've read:

"Ye can switch yer facebook language to Engligh-Pirate fer some fun and jollies!  Scroll down ter the bottom of yer personal page and click on the language button ter see the pop up.  Then click English (Pirate) ter have some fun!

at September 19, 2013 No comments:
Email ThisBlogThis!Share to TwitterShare to FacebookShare to Pinterest
Labels: at home, silly kids

Be sure to sign up your homeschool students for the 2013-2014 BOOK IT! Reading Program from Pizza Hut! The program offers some rewards (free pizza!) for kids to encourage them to read. Best of all, the program is completely FREE!

BOOK IT! is available for public, private, and homeschools. It is a six-month reading incentive program. Technically, the deadline to enter was September 1st but they will continue to take new enrollments "while supplies last". With BOOK IT!, you help your kids set reading goals for each month. Print out some of the fun BOOK IT! tracking calendars and encourage your kids to start reading. It is a 6 month program so kids will track their reading progress from October - March. I love that they get rewards each month that they meet their reading goal so they get an immediate reward for their reading. Pre-readers can still participate with a parent reading to them.

Have fun reading!
at September 18, 2013 No comments:
Email ThisBlogThis!Share to TwitterShare to FacebookShare to Pinterest
Labels: at home, books, homeschool, reading

The glimmer of gold is in sight

Last night both kids went to the children's archery league at Cinnamon Creek Ranch. Rachel did well at times with several 4's but many times her arrows didn't even hit her target. It's been a few weeks since she has shot her bow and has definitely gotten a little rusty.

However, Nicholas has been doing very well. He has gotten many bronze medals and a couple of silver medals. The way the system works is their scores are added over two sessions. There is a master list that shows the scores required for each medal based on different types of bows. So the kids are only competing against their own best scores and not each other.

Last week, Nicholas had a phenomenal night and was well situated to get a gold medal last night. Unfortunately he scored a 146 and he needed a 150 to get gold. He was a little sad when he realized his total score but he should be quite proud. 146 is his new highest score. His previous highest score was a 137. With a little more practice and another round of competitions, he could definitely be getting a gold medal soon.

But for now he is happy about his new silver medal. 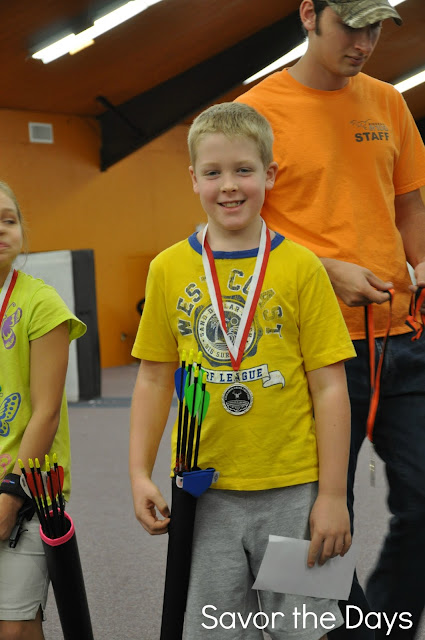 Last night's turn out was rather light. Usually there are twice as many kids up there with medals. But it was probably due to it being a Labor Day holiday. 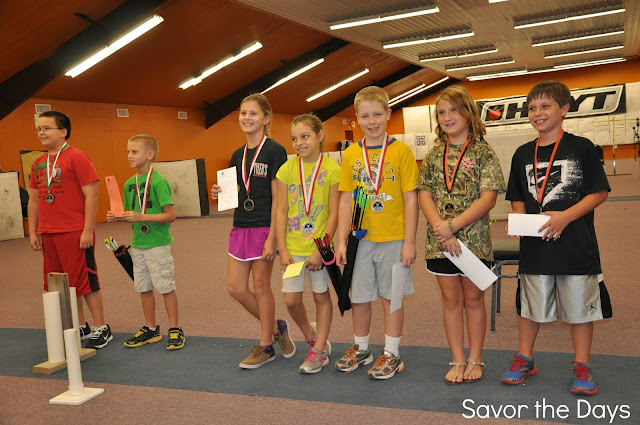 at September 03, 2013 No comments:
Email ThisBlogThis!Share to TwitterShare to FacebookShare to Pinterest
Labels: archery, Nicholas

A few weeks ago a friend of mine introduced me to a Facebook page that is for local garage sale items. No longer do you have to sit outside in the heat for 4 hours on a Saturday morning with all of your possessions being touched by strangers that happen by. Now you can just post your junk on this Facebook page and people in your local area see it and can buy it. It's kind of like selling things on Craigslist except that it is a more defined area for our town instead of the huge area that we are often classified in. I've sold a few things already and it works really well.

Of course, while I'm posting something to sell, I might happen to browse through a few things that other people are selling since I hate to pass up a good garage sale. I'm no stranger to garage sales but it is a little awkward to look through someone's things while they are staring at you or they are trying to convince you to buy something you are just pretending to be interested in until you can make your polite escape....while my 2 kids are begging me to buy every broken toy they find. With this Facebook garage sale page, I can secretly stalk what other people are selling in the comfort of my pajamas at midnight. Love it!

So anyway, I happened upon a lady who was selling bathroom vanity lights. They had just built their house and put in these brand new lights but when they moved in they decided they didn't like the style and bought something new. So she was selling these brand new light fixtures. She was selling 2 vanity light bars that each had 3 lights on them for $25 each and 2 light bars that each had 4 lights on them for $40 each. I wasn't shopping for bathroom light fixtures but suddenly I had to have these. They were a brushed nickel finish which we are slowly replacing fixtures with as things break and need replacing. Plus these have a nice frosted "alabaster" bulb cover on them. Very pretty. All of our bathroom lights are the cheapest builder grade stuff out there. I'm serious. Think $5.00 at Lowe's. Ugly stuff. So I excitedly claimed the 2 smaller bars so we could get the downstairs half bath and the kids/guest bathroom upstairs looking a little nicer. Stuart is great with electrical work so I knew it wouldn't be a problem for him to switch them out.

As I talked to him about them, he grumbled that he wished we could get the longer bars to put up in our master bathroom because we have hated those lights since we moved in. They are horrible. The builders just made a "box" from a wood frame and sheet rock that sticks out from the wall a few feet. They stuck this cheap business office looking plastic sheeting over two holes to "shine" down light on the sink area. 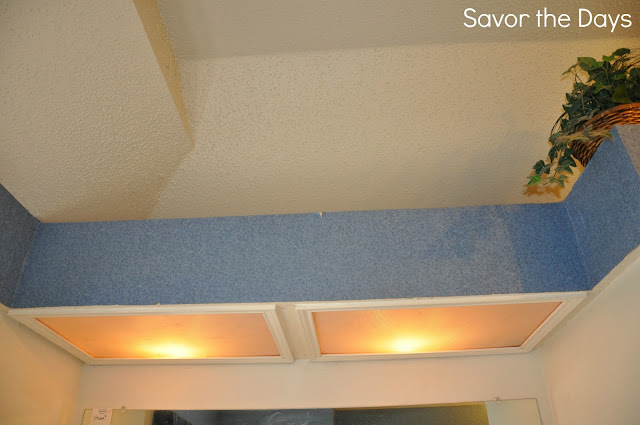 It is ugly and we get more light from opening the blinds on the window than from turning on those lights. 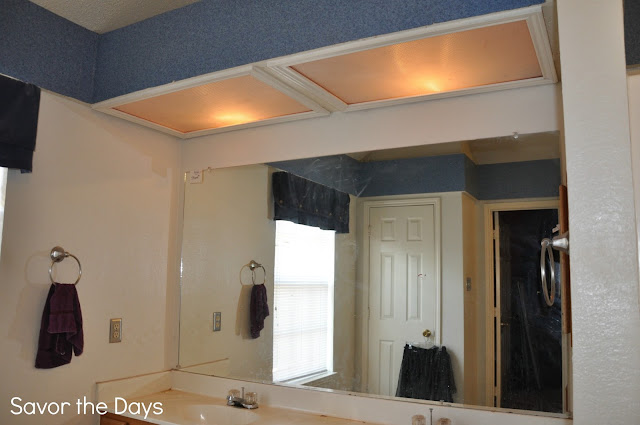 But to redo those lights would be a bigger project than we've wanted to take on so we have just lived with it.

So we went to pick up the lights for the two smaller bathrooms and the lady mentioned that she still had the two larger light bars of 4 lights each...and she would sell them both to us for just $50 ($25 each!). I told her we would have to pass but Stuart jumped in and said we should get them for the master bathroom. He said he wants to knock out the old junky box that our current lights are in and make the wall flush so we can put in these nicer lights directly on the wall. Wow, my husband wanted to spend more money than me AND he knows he just volunteered himself for a big home improvement project. I was so proud of him...and so excited thinking of having these nice lights in our bathroom.

So we bought four brand new brushed nickel finish bathroom light fixtures for just $100 total. I'm still amazed at that great deal! Here is one of the four light fixtures. The color is a little off in the picture but it is a nice soft brushed silver color. 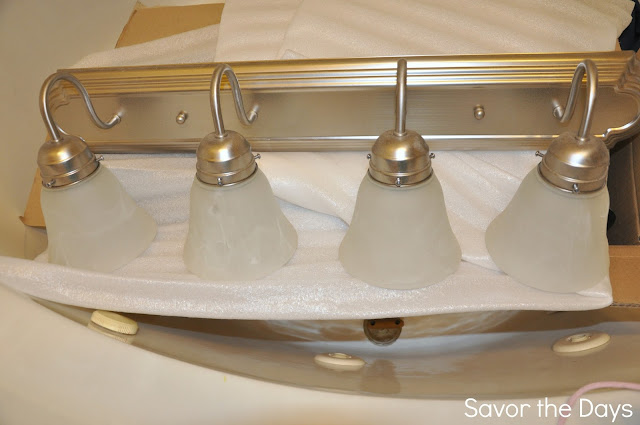 Stuart got the two smaller bathroom lights installed rather easily. With the Labor Day weekend coming up, he said he wanted to tackle our bathroom light situation since he had a three day weekend to get it done. So Friday, he started demolition work on the light box. 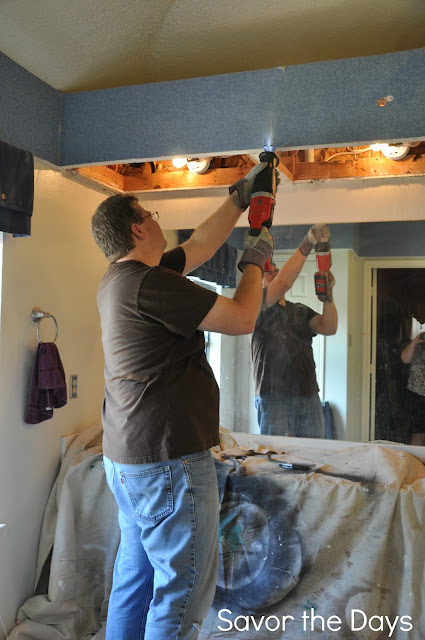 Stuart and Nicholas seemed to think this was a really cool part.

We already knew what was behind the box but as you can see, the wall is not finished with sheetrock. It is just exposed 2x4s and insulation. 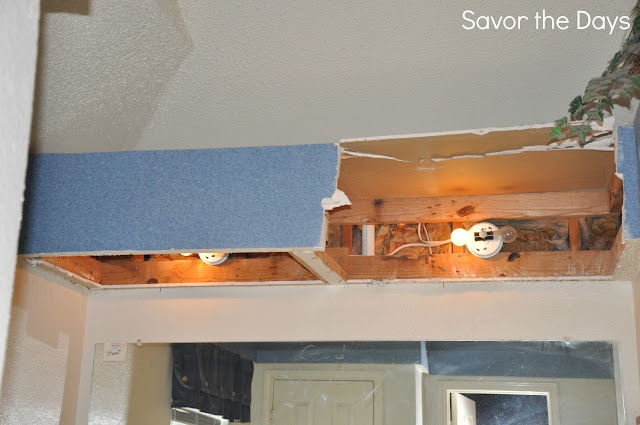 To add to the challenge, and there is always unexpected challenges when dealing with work that the builders did, the junction box over one of the sinks was not centered. Stuart could have just left it as it was but he decided to do it the right way so he moved the junction box over just the inch or so it needed to be centered. Plus, where you see the blue border in the picture, that piece actually sticks out about 1/2 an inch from the wall and goes all the way around the bathroom like that. So not only did Stuart have to add sheetrock to fill in the space on the back and side wall but he also had to make sure that he continued that "bump out" part to keep the look consistent around the bathroom.

Stuart had hoped to be all done with project by the end of the long weekend but with the various other things going on this weekend, he wasn't able to complete it. But I'm very impressed with the work that he has done in moving junction boxes, installing sheetrock, taping and compounding the seams, etc. 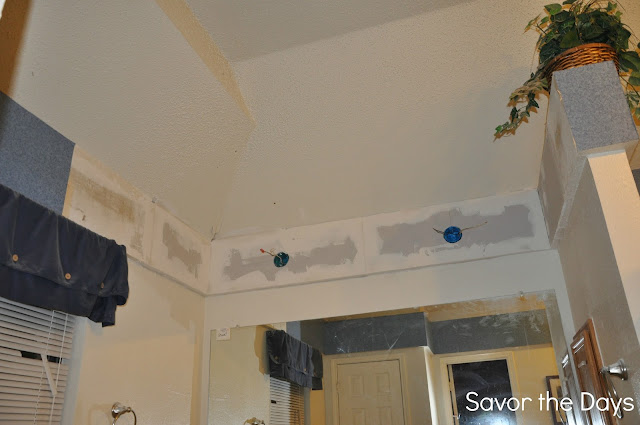 And to think that he volunteered himself for this 'honey do'! {Thank you, sweetheart!}

I really love how it is turning out. With the "light box" removed, there is no longer a visual break in the wall so you can really feel the openness of the high ceilings which just makes the whole bathroom seem more spacious.

Once Stuart has finished his work, I will take over on the cosmetic part. I'm going to remove all of the blue wall paper from all of the border wall that "bumps out". I don't really like wallpaper so I can't imagine replacing that. I'm a paint girl. But of course, under the wall paper, this "bump out" does not have a textured wall but just bare sheetrock. Why couldn't they have just texturized this piece when they were doing the rest of the wall? Was this "bump out" added after the walls were textured to hide some kind of problem we are not aware of?

Anyway, so my plan is to use a primer on the sheetrock on the "bump out" to get it ready to paint. But then I will have a smooth surface on the "bump out" that is going to show every imperfection in the sheetrock creases. So I imagine I will have to add some kind of simple wall texture to this "bump out". Of course the wall texture that I add won't be an exact match to the texture on the rest of the wall. But if I paint the "bump out" a different color than the rest of the wall then perhaps that will make the texture difference less noticeable. The current dark blue border cuts into the visual lines of the wall and makes your eyes think that the ceiling is shorter than it really is so I will try to find a light color to use on the border so it hopefully won't distract the eye.

There is still lots of work to do but we are really excited with the progress so far!
at September 03, 2013 No comments:
Email ThisBlogThis!Share to TwitterShare to FacebookShare to Pinterest
Labels: home repair, Stuart
Newer Posts Older Posts Home
Subscribe to: Posts (Atom)