A Rainy Day Ends With A Dozen Rainbows

I thought the weather was supposed to be beautiful all week so I was surprised to wake up to a gray drizzly day. So much for playing outside or going on a nature walk. Now what will I do to keep my two little munchkins entertained? I frantically searched online for something to do today that was indoors and fun for both children. Ah ha! A puppet show! Nicholas was excited about seeing the Tortoise and The Hare but not so excited to see The Princess and The Pea ("that sounds girly"). Little did he know that it was a double feature and we were going to get to see both!

The Theater Coppell has this special presentation this week performed by the Dallas Puppet Theater. Admission is $5.00 per person but Rachel gets in free. I noticed that the show starts at 10:30...it's 9:30 now and although I've had a shower, none of us are really dressed and ready for the day. I scramble to finish getting myself ready and both kids dressed and fed. As I'm rushing around, I've got a list of things to do running in my head...must bring sippy cup of milk for Rachel, snacks to keep Rachel occupied would be good, must put memory card in the camera, I've got a little cash but I should grab those extra quarters on the counter to be sure I've got $10.00 cash just in case they don't accept debit/credit cards, etc. I also called the box office to be sure that they still had seats available. No answer but the friendly recording stated that tickets can only be purchased at the door and they will have PLENTY of seats available for this week's presentation.

I flop the kids in the van and head over to the theater. We arrive. 10:20. Hmm, so we won't have the best seats in the house but at least the show hasn't started yet! I pull into the parking lot which looks pretty full. Dang! It's one of those lots that goes half way around the building and then stops so when it's full you can't get out unless you back up. And, of course, other cars have now pulled in behind me so I can't easily back up! Finally, we all manuever our way out and park at the empty school parking lot next door. Hike the kids to the theater in the rain and get inside. Whew! It hasn't started yet and other people are still in line for tickets. I guess we aren't too late. Hmm, there are really quite a few people in line. I guess everyone else was looking for cheap fun indoor activities today too. Then I learn that the theater is full and they are trying to move the puppet stage back in order to make room on the floor for more people. I can't help but think, "but the recording said that there would be PLENTY of seats available?". I do love that they are trying to work us in because I worked really hard to get here for this. Then I overhear someone mention that they only take cash. Rats! I forgot to pick up that extra change as I was leaving the house and I know I only have $7.00 in bills in my wallet. I tried to dig in the diaper bag for loose change but that's impossible while holding a one year old in my arms so I reluctantly put her down so I can dig more quickly. Nicholas, being the awesome big brother that he is, quickly realizes that this is a bad move when she starts to toddle away from me in the crowded lobby. So he grabs her and pulls her back which makes her fall down and then she starts squealing at him for stopping her toddle efforts. I'm up to $9.70 (and that includes that Sacagawea dollar coin that I was hoping to keep)! Just another minute while I count out these pennies! Then I overhear the two ladies behind me whispering, "Oh, that would be a nice thing to do", "she's having a hard enough time", and things like that. I cringe as I see one of them hand me a $20 bill to cover our tickets. It was such a sweet gesture but it made me realize how crazy of a scene we must have made! I thanked her profusely and told her that I just didn't have time to go to the bank to get the cash and I really expected them to take my debit card. I gave her back the $20 bill and told her that I had $9.70 and I knew that I had the other 30 cents in pennies. She handed me $1 and smiled so sweetly. There really wasn't any use in arguing so I thanked her again and embarrasingly paid for our tickets.

Hooray! We made it in the theater. Now, I can sit and catch my breath during the show. It's only 10:30 and I'm already exhausted! Well, no rest for Mama. Rachel was so excited by all of the people around her (we were VERY tightly packed in) that she just wanted to get up and wander around to meet and greet everyone. So I had to hold her in my lap which just made her mad for being restrained so then she started in with her squealing and squirming. The show has already started at this point so we were being a bit of a distraction. I'm sure the lady that helped pay for our tickets was having second thoughts! Fortunately there was a dog puppet that appeared every now and then. Rachel loves dogs so I was able to keep her distracted when the dog was on. She would look at him and say, "woof! woof!" and then pant like a dog. She also liked the parts where the audience clapped. But other than that, she really didn't care to watch a puppet show.

I must say that the performance was nice. The entire show was put on by one man from the Dallas Puppet Theater. He did a fantastic job talking to the children at the beginning of the show about what to expect. After the show, he came back out and explained the different kinds of puppets that he used and explained the differences between a mouth puppet and a hand puppet. Then he took down the curtains around the puppet stage and explained how the puppets and props are set up behind stage and even let the children touch some of the puppets. 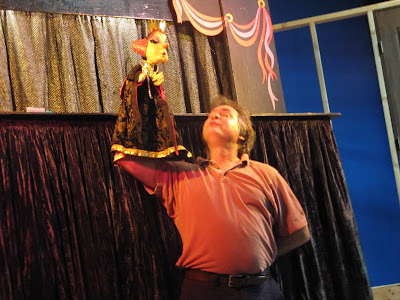 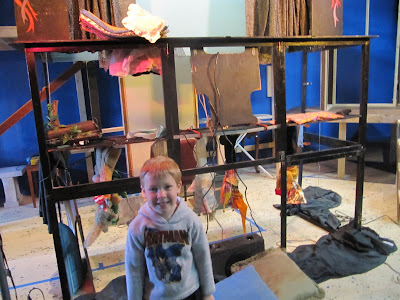 Despite, our trials in getting into the theater, I really enjoyed the production and the staff at Theater Coppell and I plan to check out some of their other upcoming productions. I love small local theaters like this. 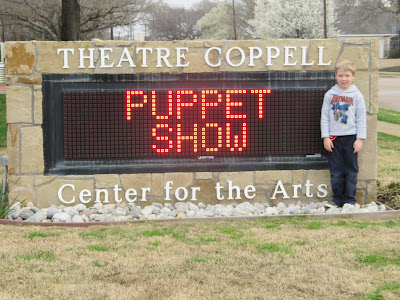 Tomorrow is St. Patrick's Day. Everyone knows that leprechauns hide their pot of gold at the end of the rainbow so we decided to make our own rainbows, or at least rainbow cupcakes! This is the cutest cupcake idea and they are a lot of fun to make. I've seen it in Family Fun magazine, my absolute favorite magazine for ideas for fun things to do with kids. Click HERE for their actual online recipe.

We first made a basic white cake batter - made from scratch by Betty Crocker, of course! 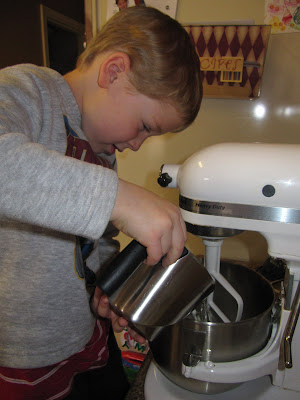 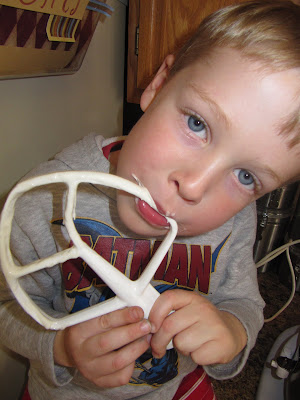 Then we divided the batter, somewhat evenly, into 6 bowls and added food coloring to the different bowls to create purple, blue, green, yellow, orange, and red batter. 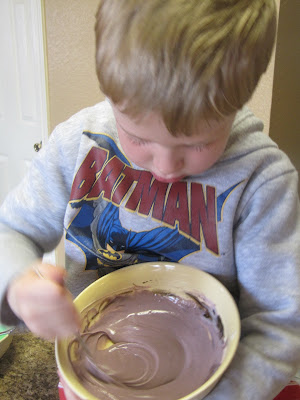 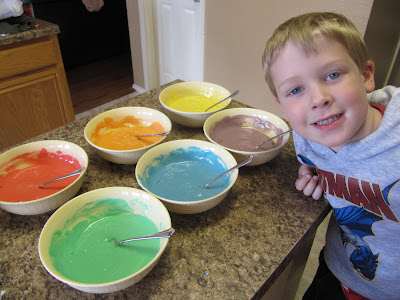 The next step was the most time consuming part. You then layer the batter in the cupcake pan. A scoop of purple on one cupcake cup, spread it out with the back of the spoon, then repeat 11 more times for the other cups. Then you go back to the first cup and do the same with the blue batter and so on until you've got your layered cupcakes. Then bake according to Betty's recommendations. 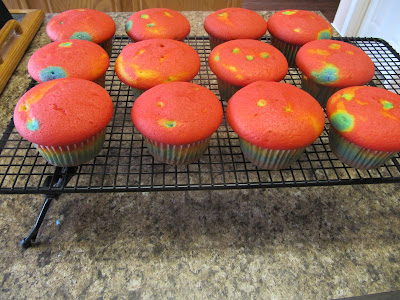 They turned out beautifully! Even though it isn't officially St. Patrick's Day yet, we had to sample them to make sure they were ok to share! We actually ended up with 16 cupcakes so we're bringing some with us to the zoo tomorrow where we are meeting up with some friends for some fun on St. Patrick's Day. 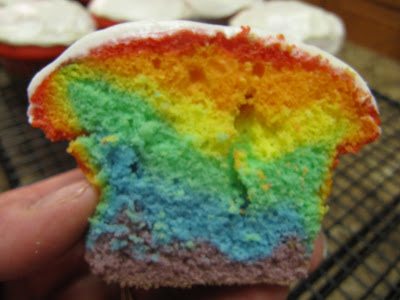 at March 17, 2010
Email ThisBlogThis!Share to TwitterShare to FacebookShare to Pinterest