Fort Worth Nature Center and Refuge

Daddy took off work today to go play with us. Hooray! We hit the road a little after lunch time but it was Rachel's nap time so she got in some zzzz's while we drove. 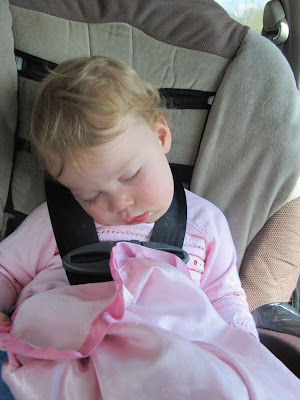 We wanted to get outside and enjoy the beautiful weather so we visited the Fort Worth Nature Center and Refuge. It is one of the largest city-owned nature centers in the United States at 3,600 acres! Check out the awesome trail map. A true urban wilderness... We started off visiting Prairie Dog Town, a big field with scattered trees that is home to a large family of prairie dogs. 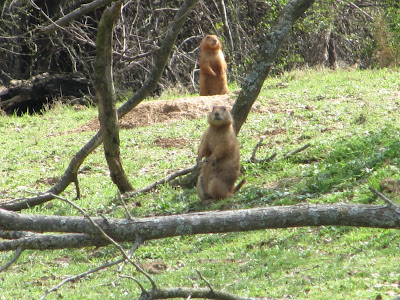 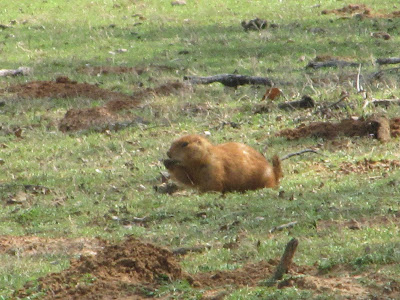 I can see why Prairie Dog Town is fenced in. If my children has their way, they would have been chasing those poor little prairie dogs all over the field in an attempt to pet one of them! 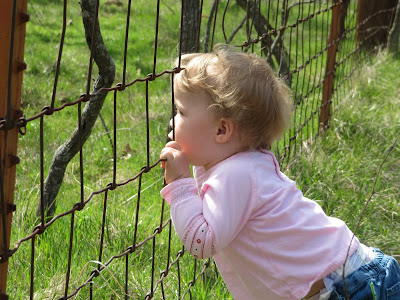 Next we headed to Greer Island, an island out in Lake Worth connected by a man-made levee. 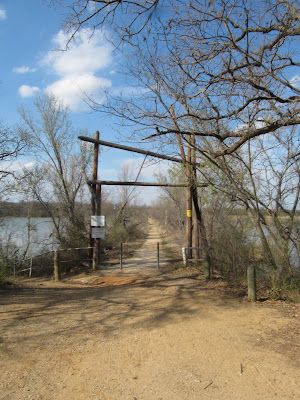 Nicholas argued that this couldn't be an island because technically it was connected to the land and an island should stand alone in the body of water. Hmmm, maybe he's got a point.

The trails were well worn and easy to walk through with a stroller. We like to let Rachel walk on her own as much as possible. However, she had to spend some time in the stroller or we never would have made it out of the woods for stopping every foot to explore the ground for 10 minutes at a time. 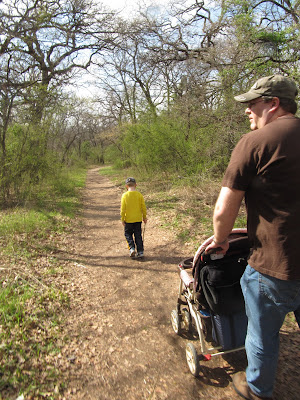 But Rachel still had a great time. I showed her interesting things we found along the way and she had fun laughing at us when we got silly. 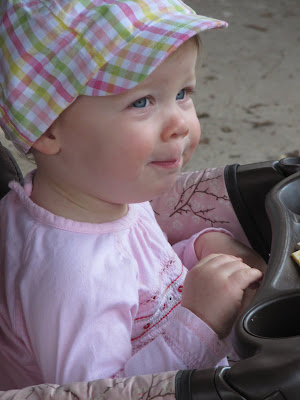 I love a lonely trail in the woods. It's so peaceful looking and seems to call to me to explore it. 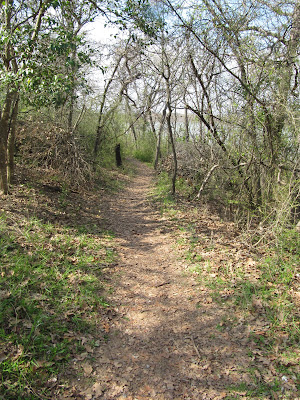 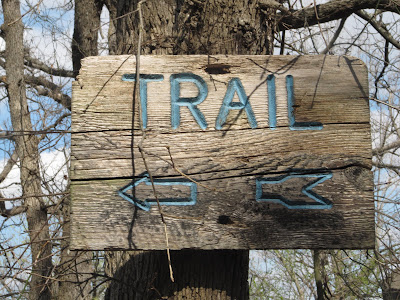 Nicholas enjoyed playing at the water's edge. Anytime a trail would wind past an opening to the water, he would have to go check it out. He watched the water hit the shore line, watched fish, listened to what we think were beavers, and he threw in a few sticks of his own to help them in their dam building efforts. He spent a lot of time at the water. 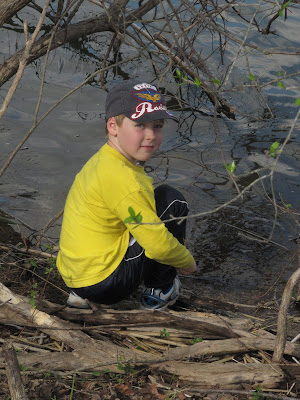 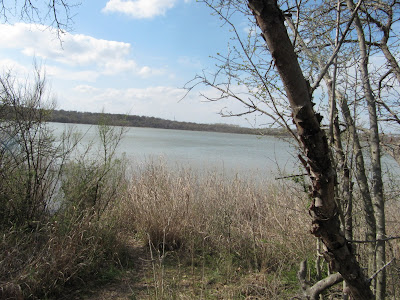 When he wasn't stopped at the water, he was exploring or running along the trails. What great exercise while enjoying the fresh air outside. It's so exhilarating! 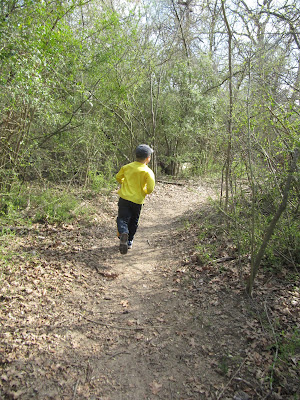 We found this cool tree with 4 main trunk sections that Nicholas just had to sit between. While he was there we studied some giant ants running along the bark. 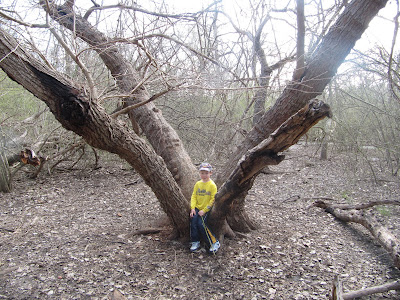 Nicholas also found this small tree that had died and fallen over. Looking at the roots system from this angle, Nicholas decided to name it the Tarantula Tree because it looked like a giant spider. 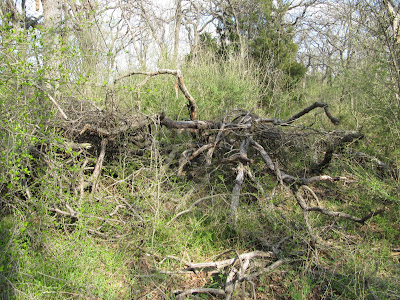 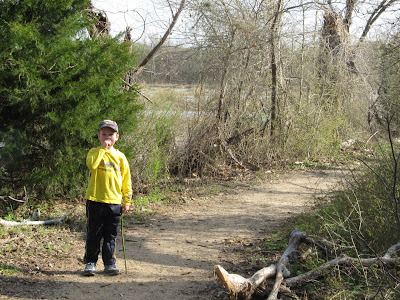 When we left the nature center, we tried to go watch some of the military planes take off and land at Carswell Air Force base in Fort Worth but there wasn't much activity at the time. But have no fear, we travel with our own entertainment so we never get bored! 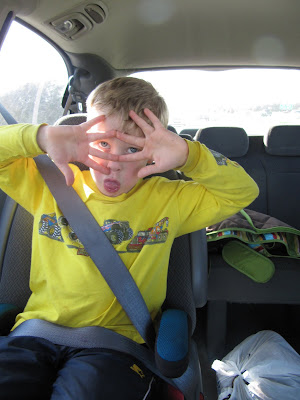 We decided to go ahead and get some dinner while we were in Fort Worth so we stopped at Pappasito's for some Tex-Mex (my favorite kind of food!). While we were waiting for a table, Nicholas just had to play in the fountain. As I recalled his obsession with the lake along our nature walk, I couldn't help but wonder if he isn't part fish! 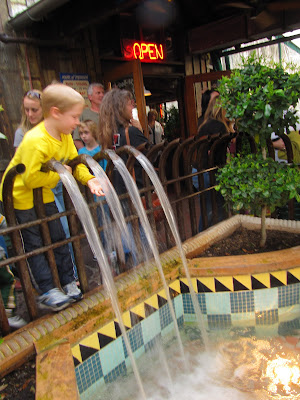 On a trip to the bathroom with both kids in tow, I saw an elderly woman who stopped me. She said, "I just have to tell you that I was watching your family outside and you are so blessed. You have such a wonderful, sweet family. Your children are so precious and well-behaved." I was so touched that I almost cried right there. How sweet of her to take time to stop and tell me this. And I really needed to hear the part about how precious and well-behaved my children are. They are quite loud and messy and rambunctious and opinionated and it's hard to enjoy dinner out with my family at times because of all of the spills, noise, and interruptions from the Peanut Gallery. But you know what? They really are wonderful kids and in the big scheme of things they probably are well-behaved. I truly am blessed! 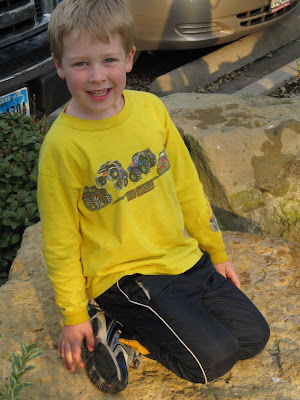 at March 20, 2010
Email ThisBlogThis!Share to TwitterShare to FacebookShare to Pinterest
Labels: Nature