A Day With No Plan

The first day of spring break and I had nothing planned. I kind of liked that idea but soon realized that two young children don't have the same appreciation for lounging around the house like I do. Structure and activities are a must lest total chaos abounds.

Nicholas wanted to go camping this week but the weather is in the 40's and way too cold for me to want to sleep outside. So we improvised with the usual indoor camp grounds made of sheets draped over furniture. We played games and used our flash light to search for critters in the woods and of course roasted marshmallows over a fire. We even brought in "The Very Quiet Cricket" book because the last page has plays the sound of a real cricket chirping. (I love how Rachel sits! It looks so uncomfortable to me but she always sits this way.) 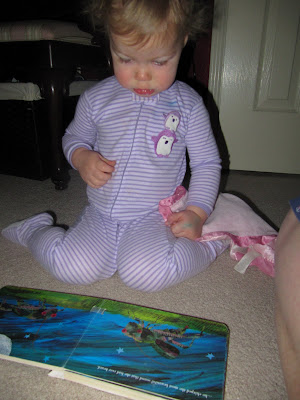 Then I told them it was getting too dark to play in the woods and everyone needed to go to sleep in the tent. Ahh, some quiet time for Mommy? 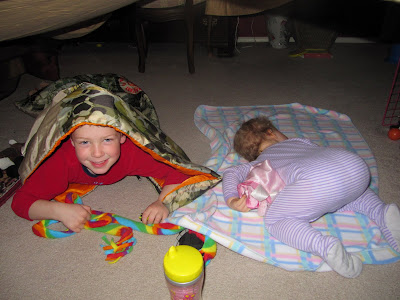 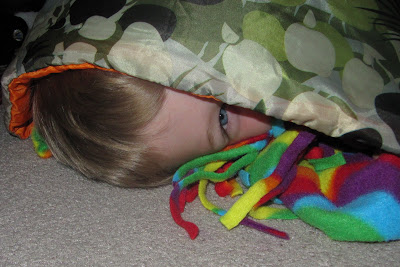 Nope! This lasted exactly 5 seconds and they were bounding about again. I had a few errands to run and I thought some time in their respective car seat restraints might do us all some good so we hit the road. We got several errands completed but, this being the day of no plans, I did not have food for the two little ones and we were a bit of a drive away from home. So McDonald's drive-thru and picnic at a park it is! We found a cool park in Farmer's Branch that we had never been to before. 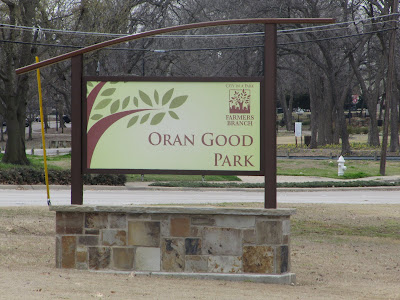 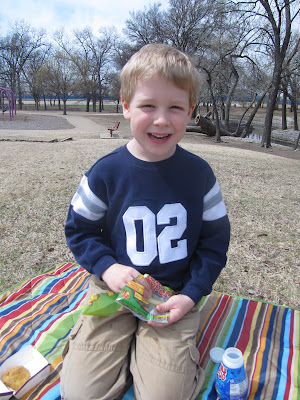 I was quickly reminded that I have a toddler and by the very nature of the name "toddler" she is required to enjoy toddling. Although she was hungry, every fiber in her being told her it was time to toddle around. So she sat for 30 seconds, took one bite of chicken nugget then stood up and just walked away...surprisingly quickly too. I tried calling her back. Silly Mama thought that would work. So I got up and carried her back to her delightful happy meal. She sat long enough for me to sit back down and then she toddled off again...laughing! 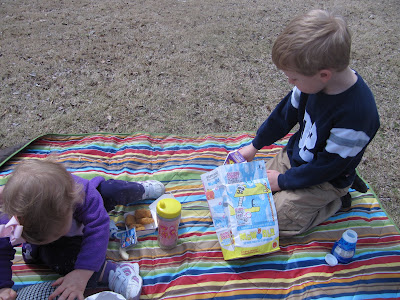 I played her game a few times and then decided to just hold her in my lap while Nicholas and I finished eating. Boy, that was like herding cats. Whew! I was glad when lunch was over and I could just let them go play.

The park has several great playgrounds. There is an area for little kids with three main playgrounds for climbing, sliding, tunnels, and activity boards. These are all covered under tarps to keep them in the shade. 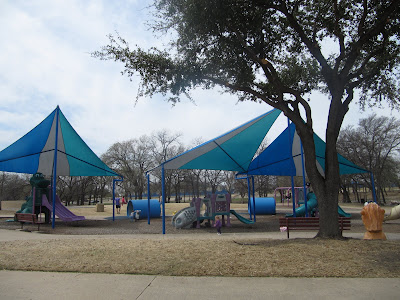 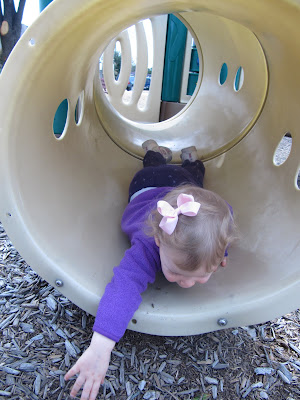 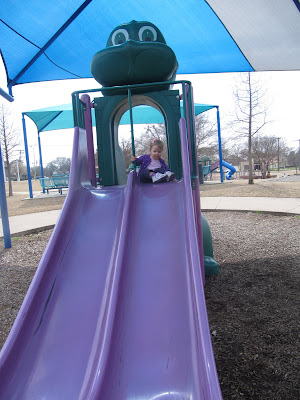 There are also some bouncy, ride-on type things that I haven't seen at a park in a long time (and they appear to be much older than the other playground equipment). Nicholas quickly made friends with a little girl and they played on this big dinosaur together for quite a while. 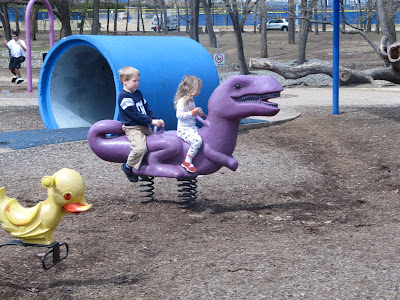 Rachel had fun on the smaller toucan. 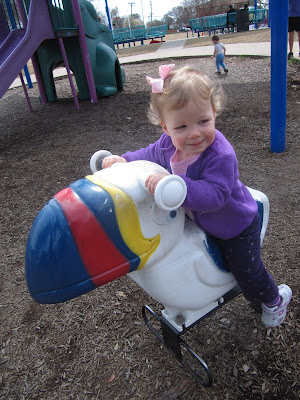 Of course, there are multiple sets of swings. Nicholas found this special swing intended for disabled children. He liked it the most because he enjoyed pretending that it was a jet pack shooting him up in the sky. 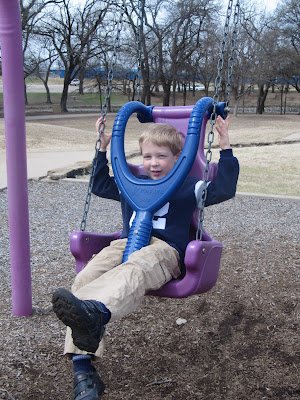 There was also a playground for bigger kids. We didn't spend much time there since I had to keep up with my toddler and needed to be near activities that could keep her safely occupied. 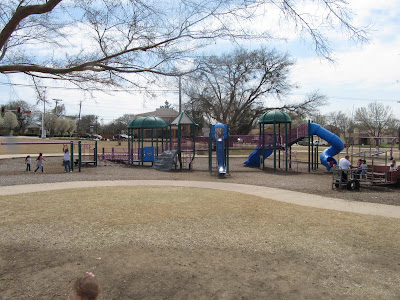 There are lots of trees at this park and several had climbing potential. 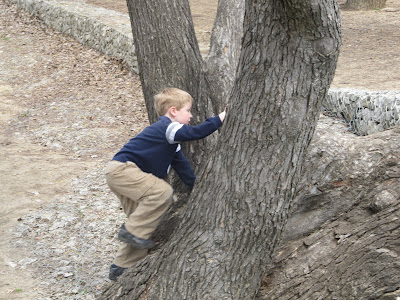 Of course the easiest tree to climb is the one lying on the ground! 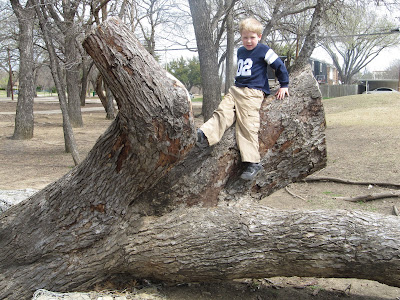 There was a big hill near the big kid playground that everyone was having fun running up and then rolling down. There is also a neat waterway through the park. Nicholas and Rachel both enjoyed watching the ducks swim by. 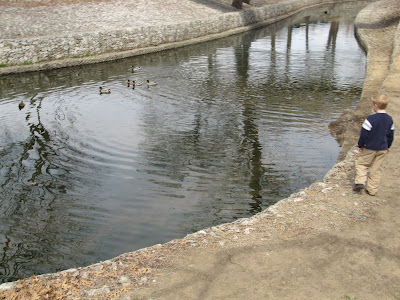 One of the most charming things at the park was this old water faucet in a lion's mouth. This was old like the bouncy, ride-on toys and obviously from when the park was originally built. But all the kids at the playground loved it. 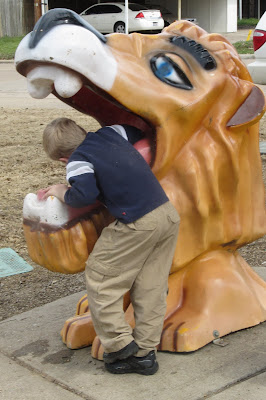 Rachel didn't drink from it. She just liked playing with the water. 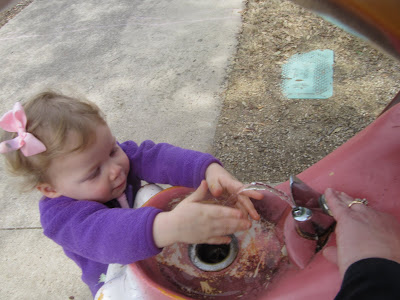 As soon as I would stop the water, she would point to the faucet... 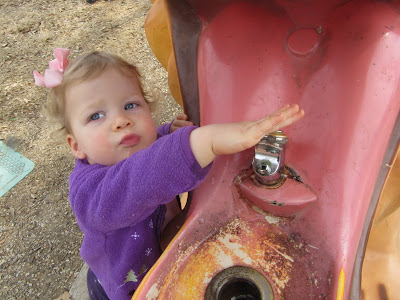 ...and make the sign for "more"... (look at that pitiful pleading look in her eyes!) 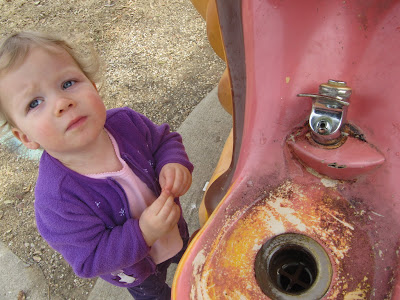 I really like this playground. It has lots of fun things for all ages which is great for me since I've got two children at very different ability levels. There is lots of open space for Rachel to walk until her little feet wear out. The toddler area is awesome... 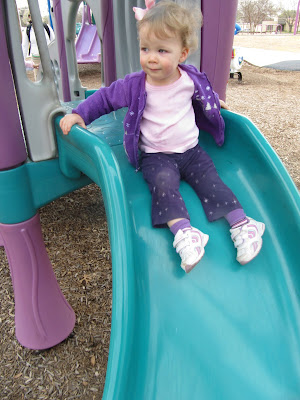 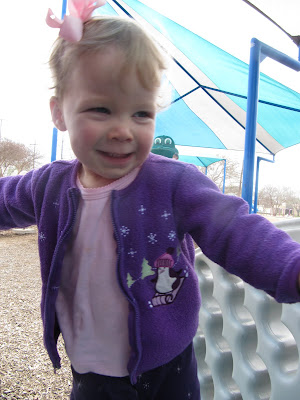 The big kid playground was great plus there was lots of other things to explore. As we were leaving, Nicholas said, "This is the best park ever! Everytime we go to a park, let's go to this park!" Sometimes it's nice to have a day with no plan. You just never know what wonderful surprises await!
at March 16, 2010
Email ThisBlogThis!Share to TwitterShare to FacebookShare to Pinterest