Just The Two Of Us

Recently Nicholas said that he would like to go do something with just the two of us, "like we used to do before Rachel was here". So I let Adventure Kids watch Rachel for a little while today so I could get some quality time with my little guy. I helped him go over a list of all different kinds of things that we could do today and let him choose. He decided that he wanted to go exploring around the lake so we packed a lunch and the usual nature walk supplies and hit the road.

You can't see it well in this picture but Nicholas has his "walking stick". He loves to find sticks that are just his size and use them while he walks. I think he may have gotten this from seeing Yoda in Star Wars because he also has a walking stick. 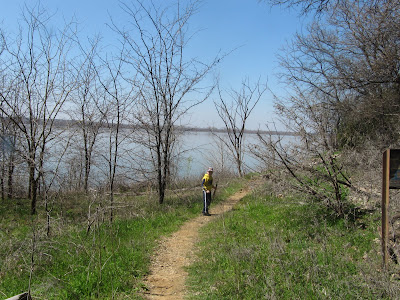 I told Nicholas that he was the leader of our nature walk. We would do whatever he wanted to do. He could get muddy and it was ok. I personally think that you can only really have fun if you've gotten a little bit of dirt on you. Of course, I made sure to pack towels, extra clothes, and a back up pair of shoes, just in case. Nicholas was all too happy to oblige. 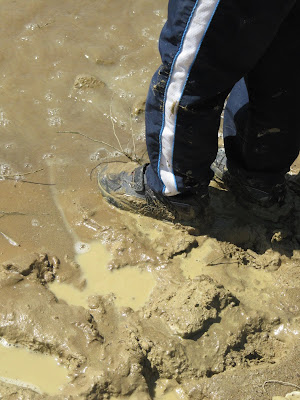 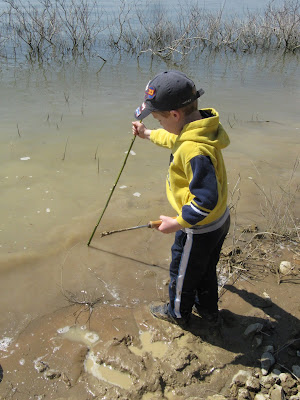 He used a little shovel and stick to dig in the muddy sandy stuff at the water's edge as he looked for fossils, shells, and anything interesting he might find. 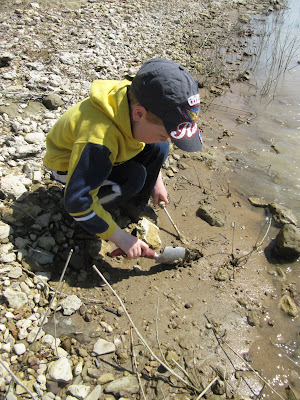 We did find some pretty neat rocks with fossilized shell markings along the shore line. 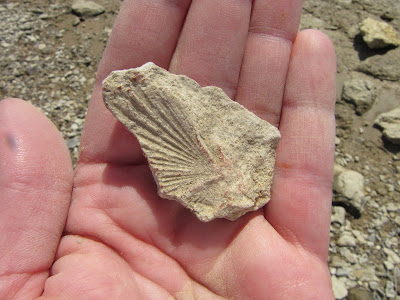 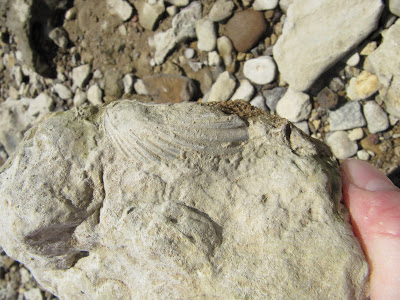 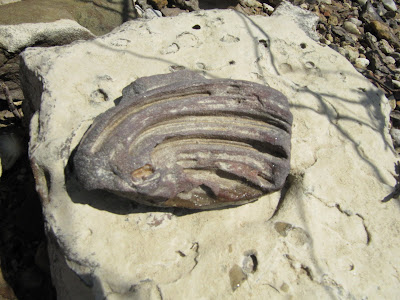 Of course, Nicholas also loves throwing rocks into the lake. 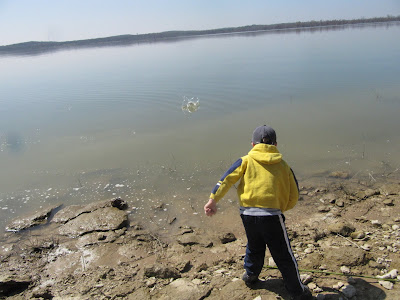 We looked at some of the plant life and flowers growing along the bank. We're happy to report that the bluebonnets are well on their way and should be in full bloom in a couple of weeks. We found a few early bloomers. 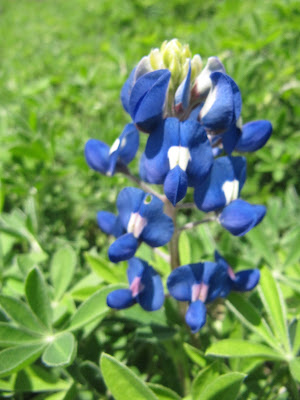 Nicholas had fun chasing the butterflies among the flowers. He even caught one with his bare hands! 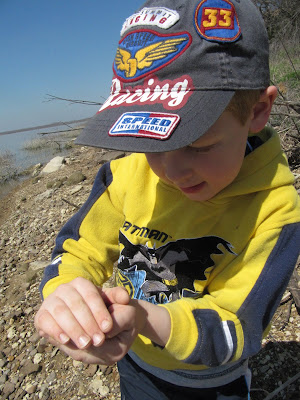 We did a little hiking through the woods along an equestrian trail. We studied some horse prints that we found in the mud. We played Indians. We looked at a dead tree. We sang songs. We both got tangled in a sticker bush - ouch! And we laughed and had fun, just the two of us. 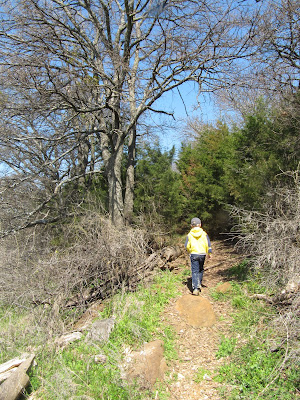 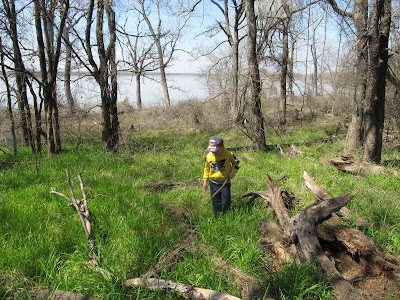 He is a boy so of course anything can be imagined to be a gun. He saw a pirate boat in the lake that was heading for the shore. He grabbed his walking stick and saved us from being attacked by the bad guys! 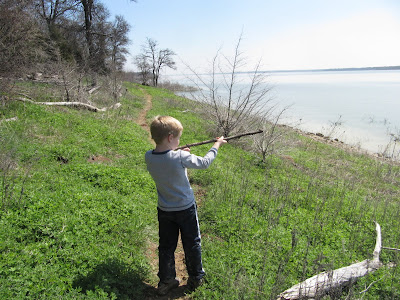 Nicholas asked me to help him attached our snack bag to his walking stick so he could carry it over his shoulder. He is so creative...and so darn cute! (granted, I do have a bit of Mommy bias). 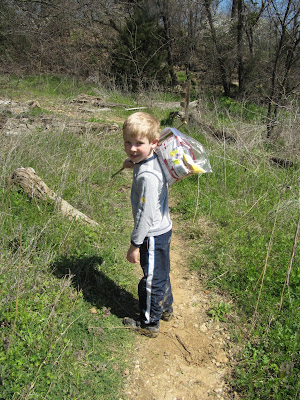 Nicholas munched on some Lay's potato chips in the car. He held out one chip and said, "Mommy, this one is for you. It's the shape of a heart!" Awww, so sweet :) 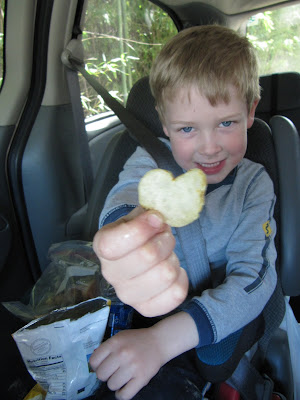 We picked up Rachel from Adventure Kids and then we heard the oddest thing. We could hear Marble Slab Creamery was calling to us. Who are we to argue? 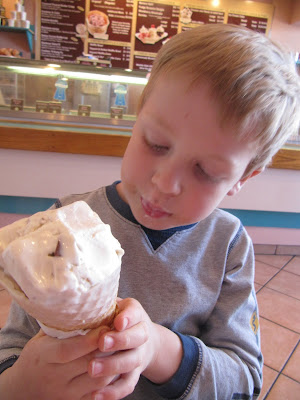 Rachel and I were going to share some strawberry ice cream with fresh strawberry mix-ins. I got a spoon for each of us but Rachel decided that it was all for her. But she didn't want to bother with a spoon. Instead she stuck her finger in it and licked the ice cream off of it. Messy baby! 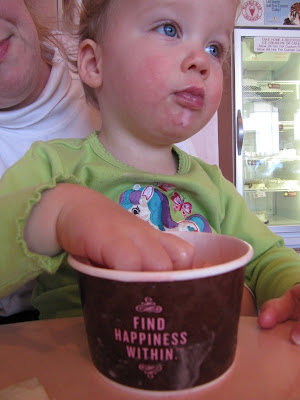 Slurping from the cup was also found to be effective. 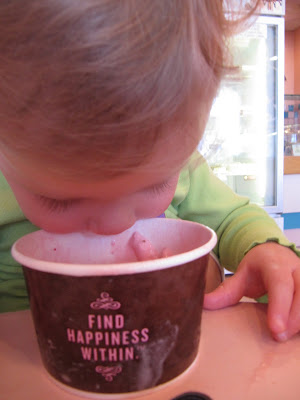 I love doing things with my two sweet little kids. I get a lot of one on one time with Rachel during the week while Nicholas is in school. But it's been a long time since I've had such a fun outing with just Nicholas. I will treasure this day and I realize how important it is for both of us to have this time together.

I must say a special thank you to Adventure Kids. It's such a great place to use for childcare. We don't have family here that can watch our kiddos for things like this or even for me to go to a doctor appointment so we use them quite often. They are so great with the kids and Nicholas even tells us when we need to have a date night because he really just wants to go play at Adventure Kids. If you go by there, tell Michelle "hi" for us!
at March 19, 2010
Email ThisBlogThis!Share to TwitterShare to FacebookShare to Pinterest