Working with Water and A Little Boy's Imagination

As I've mentioned before, Nicholas loves feeling like he's doing an experiment. It doesn't have to be a real experiment of any kind but preferably involves mixing various ingredients and colors, using pipettes or medicine droppers, transferring the concotion from one place to another, etc.

In an effort to work with Nicholas on his writing skills, I thought we would work on improving his fine motor control and pincer grip. Maria Montessori would love a work like this. I used three bowls each containing a different colored water, a shower slip proof suction cup thing turned with suction cups facing up, and of course, a pipette for transferring the water. 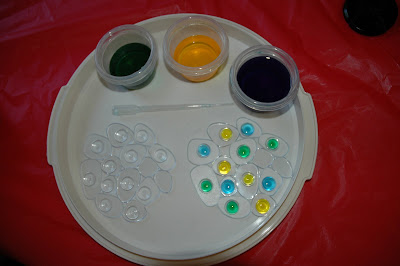 I used the pipette to fill the suction cups with a pattern of colored water then Nicholas got a turn to reproduce the pattern I made. 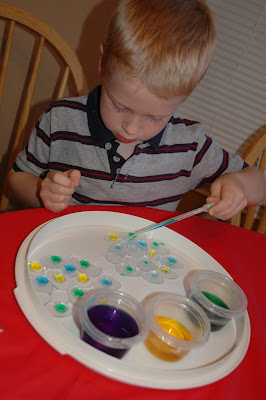 He had fun with that but soon my neatly organized work became a free-for-all Nicholas experiment. He was still working with those fine motor skills that I wanted to work on but doing it his own way and having more fun. Good for him! The pipette went into overdrive as it transferred water between the suction cups and the tray and the little bowls of water. Of course it all ended up being a solid green color which Nicholas thought was pretty cool. 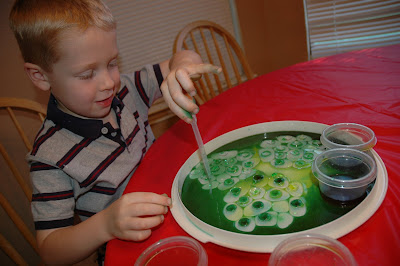 He then took his science experiment a step further. He said that we were doctors and the green stuff was our secret cure for swine flu. We had pretend patients come to visit our clinic. He put me in charge of triage and he was the doctor responsible for administering the medicine. All of our patients were diagnosed with swine flu and had to be given shots of the secret green medicine to get well. If they cried in pain when given the shot then a simple Band-Aid was supposed to make them feel better. But if for some reason they were still crying from the pain then they also got a popsicle. Everyone went home healthy and happy.
at June 12, 2009
Email ThisBlogThis!Share to TwitterShare to FacebookShare to Pinterest