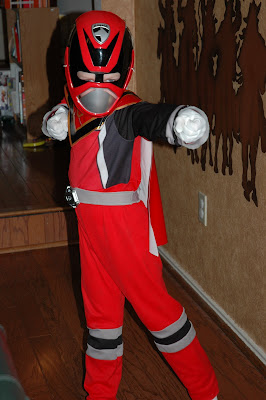 Nicholas is having fun in Super Hero Camp. He had a hard time deciding which costume to wear to camp but he finally decided on the Red Power Ranger. He doesn't really know much about Power Rangers since he's never watched the show but he thinks they look cool.

He often wears his costumes around the house. Recently he was wearing this Power Ranger costume and directing my lines to act out. I was in the kitchen making dinner and he would suddenly appear in the kitchen out of nowhere.

Mommy:: "Oh my! Who are you? (acting scared) Are you a bad guy?"
Power Ranger: "No, I'm good. I'm a Power Ranger. I'm here to help."
Mommy: (sigh of relief) Whew! I'm so glad you are here. We could always use a good guy around here to protect us. Oh, I wish Nicholas were here. He would love to meet you."
Power Ranger: (ripping off his mask) "Surprise! It's Nicholas!"
Mommy: "Oh, Nicholas! I didn't know that was you! I thought there was really a red Power Ranger in our kitchen."

at June 09, 2009
Email ThisBlogThis!Share to TwitterShare to FacebookShare to Pinterest