Nicholas wasn't too excited about the Barnes and Noble story time. He usually has a good time there but I think this has something to do with his newfound "big boy-ness" because he was worried that there was just going to be babies there. But he was pleasantly surprised and actually ended up having a good time. There was a cute little song and then we read a story about the beach. Nicholas doesn't usually speak up in a setting like this but he was quick to answer questions about the story and then told some stories of his own about the beach. I was proud that he didn't act shy and silly like he does when he gets put on the spot and feels a little nervous.

After the story, everyone got to make their own beach hats to keep. Nicholas usually doesn't want to bother with structured arts and crafts projects like this but he surprised me again by actually getting excited about this one. Nicholas picked blue, his favorite color, and decorated it with blue stars. 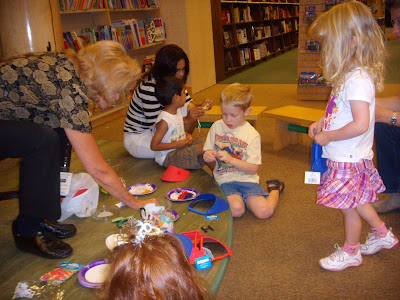 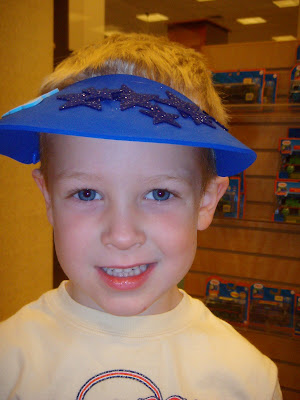 After story time and the craft, Nicholas and the other kids had fun playing together with the Thomas train set. Rachel and I picked out some board books to read while Nicholas played. I was holding her in my arms as we were looking at the books. She really loves looking at books and got excited by all the colorful books on the shelves. Her new thing is that when she gets excited, she bounces. But it's not a little bounce. It's more like she bucks her whole body around, while giggling, of course. She was doing this while also reaching for books on the shelves. When she would get one, she would quickly try to put it in her mouth. What better way to meet a new friend, right? 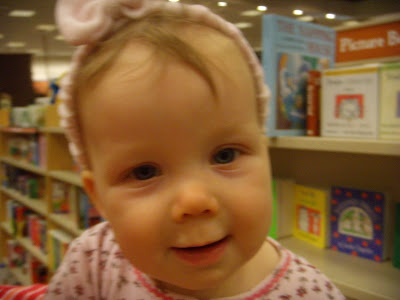 at June 04, 2009
Email ThisBlogThis!Share to TwitterShare to FacebookShare to Pinterest