This morning, Nicholas wanted me to take his picture. And he directed me on the posing and how the picture should look! First he got a picture with Rachel. Yes, I took a blurry picture but it's the camera's fault for not being on the setting I usually use! 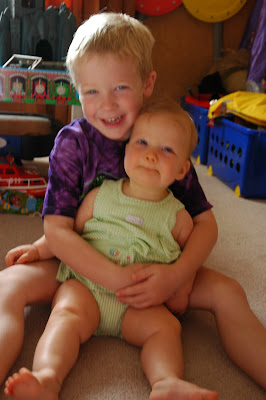 Next, he wanted to pose in the doorway. I'm not sure why that was special to him but he insisted on this particular pose. And he wanted to be sure that his VBS shirt showed up well in the picture. He's pretty amazing! Even if he isn't taking the picture, he is still using a photographer's eye to frame up the shot the way he wants it to look. Too cute! 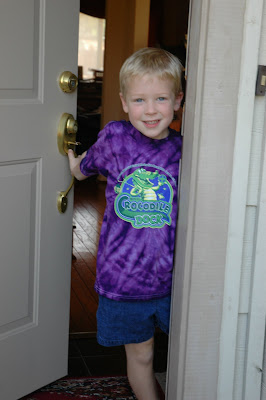 Tonight after dinner, Stuart set up his tripod and some lighting equipment to take some posed pictures of me for an online photo contest. He spent lots of time working on the set up of the equipment to get the shot just right. Nicholas was watching Stuart...and learning. Afterwards, Nicholas set up a pretend tripod (his three-legged stool from his drum set). 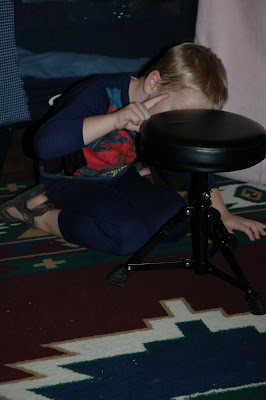 He then had Stuart sit across from him while he directed Stuart on how to pose. There were many different poses and even some props used. He's definitely Stuart's little "mini-me".
at June 22, 2009
Email ThisBlogThis!Share to TwitterShare to FacebookShare to Pinterest