Last night Stuart and I went to a Dallas Stars hockey game at the American Airlines Center in Dallas as part of his birthday present. What fun! We've loved hockey since we moved to Texas almost 15 years ago (wow, has it really been 15 years?). Unfortunately with two kids there are always other things to do with our money and time so we rarely get to go to these games except for a few games where Stuart has been given tickets from his employer for doing a great job on a particular project.

However, we were desperately in need of a fun date night away from the kids so we put them in Adventure Kids for the evening and had some fun at the ice rink.

Our seats were pretty good. We were on the aisle and could look down as them team entered the ice through the big star. 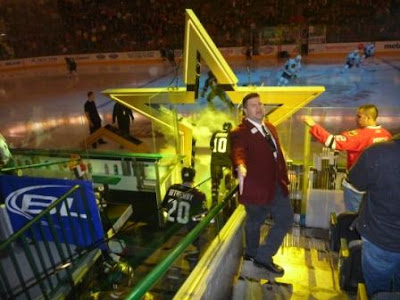 As with any major sporting event, we always sing the National Anthem before the game. This is especially fun at a Dallas Stars game because there are two places in the Anthem where you sing the word, "stars". Of course, as Stars fans, everyone shouts "stars" in those two places. Silly, yes, but we love it!

It was an exciting game against the Chicago Blackhawks. There wasn't a lot of fighting and we didn't catch a puck. However, the game was a lot of fun. We were tied at the end of regulation play so we went into a 5 minutes OT. During OT, each team pulls one player to make the game a little more challenging. The first team to score during OT wins the game. However, we were still tied after OT. So then we went into shootout format with one player vs. one goalie. 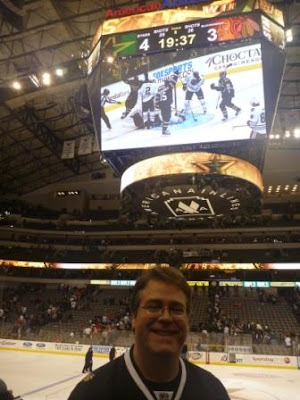 at February 12, 2011
Email ThisBlogThis!Share to TwitterShare to FacebookShare to Pinterest