For Christmas, Uncle Steve O. wanted to share with Nicholas some of the cool super hero shows that he used to watch when he was Nicholas' age. So he gave Nicholas two DVDs full of episodes from the cartoon, "Super Friends", a union of super heroes that fight an odd bunch of bad guys. Nicholas fell in love with the shows and watches them every chance he gets.

Nicholas loves bounce houses so we planned the party at Boomerangs which is an open building space filled with 8 or so giant bounce houses and inflatable obstacle courses. I asked him what kind of theme he wanted for the party. I fully expected that he would say Star Wars but he said Super Friends without hesitation. Super Friends was a series back in the 1970's so there is no chance of finding true Super Friends invitations anywhere. I asked if we could just send Batman or Superman invitations because they were both part of the Super Friends team. Nicholas said that wouldn't work because it had to be Super Friends. (I'm thinking...Thanks a lot Uncle Steve!) So I searched online and found a Super Friends graphic and made our own invitations. 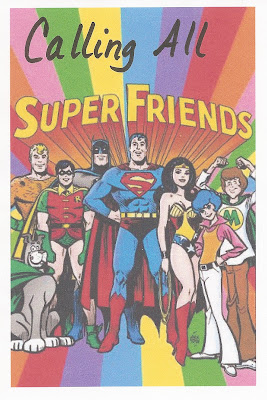 Inside the invitation we said that Super Hero Nicholas needed the help of his Super Friends and called them all to the Hall of Justice for a celebration wearing their favorite super hero costume. It was a lot of fun. Nicholas wanted to be Aquaman but you can't really find Aquaman costumes anywhere so he settled for Batman. 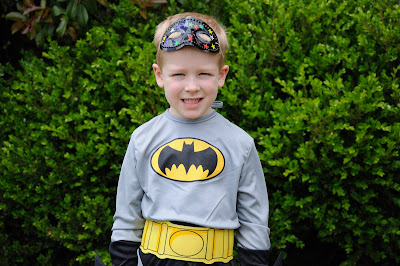 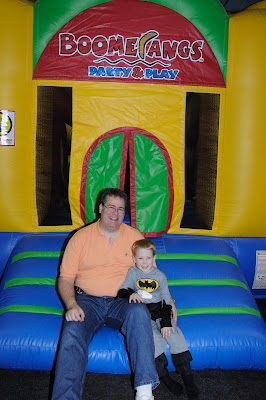 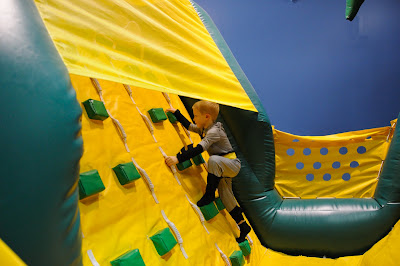 As the birthday boy, Nicholas got to sit in the giant inflatable chair at the end of the table as everyone sang Happy Birthday to him. He was a little embarrassed and kept making silly faces. 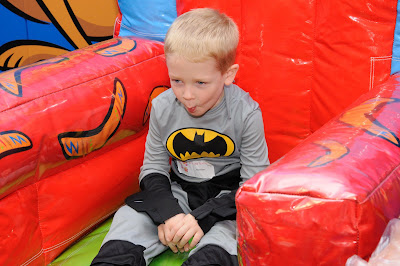 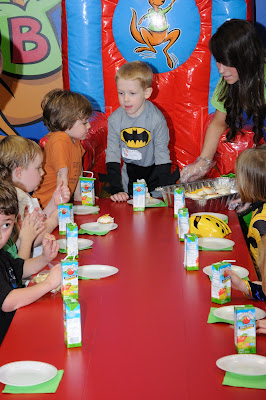 The party turned out great and I just wish we had thought to get a big group picture of all of the kids in their super hero costumes. That would have been really cute. Thanks to all of his super friends that came to celebrate his birthday with him!
at April 20, 2009
Email ThisBlogThis!Share to TwitterShare to FacebookShare to Pinterest