The Easter Bunny and an Egg Hunt

We had fun today at our annual PTA Easter egg hunt. The Easter Bunny made an appearance and Rachel got to meet him for the first time. She didn't seem too interested in the bunny but she was fascinated with trying to put his big white thumb in her mouth. 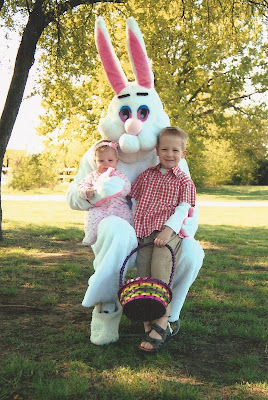 Nicholas has not asked any questions about the Easter bunny being real...until today. He announced that the Easter bunny was just a person in a costume and he kept looking over at the bunny like he was really studying him to see if his hypothesis was true. Then he saw what he needed. He excitedly told me to look at the back of the bunny's neck and that I could see the person's neck between the bottom of the "helmet", as he called it, and the costume. Sure enough, the good ol' Easter Bunny has been found out. I tried to explain that perhaps he was just a helper bunny and that the real Easter bunny is home making up all the baskets for the children to find on Easter. He sort of seemed to believe it but I couldn't tell for sure.

Then it was time for the egg hunt. And they were off... 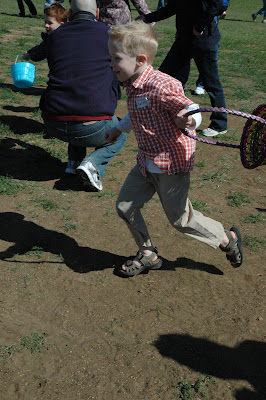 Everyone paid a few dollars ahead of time to participate in the egg hunt. The money was used to purchase a dozen filled eggs per person. I assumed that each kiddo would just get however many eggs they found. However, for the sake of the slower hunters, we were asked to be sure that each child didn't take more than their allotted dozen eggs. I hadn't made a big deal about this to Nicholas but he followed the rules wonderfully. Once he was done collecting eggs, he quickly counted out them. When he realized that he has 13 eggs, he put the extra one on the ground for another child to pick up. I'm so proud that he did this completely on his own without any prompting from me at all. 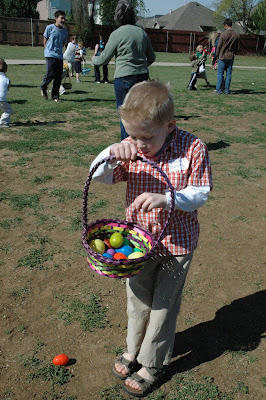 After the egg hunt, we enjoyed playing on the playground at the park, eating hot dogs and getting ice cream from the ice cream truck. What a fun morning! 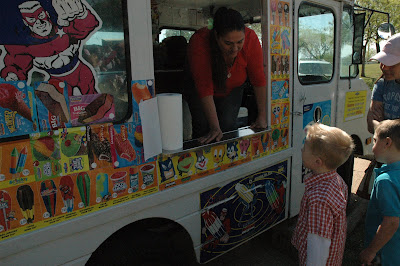 at April 10, 2009
Email ThisBlogThis!Share to TwitterShare to FacebookShare to Pinterest