Today Stuart and I took Rachel to an appointment at Dr. Fearon's office. Dr. Fearon is a renowned cranio-facial surgeon and we wanted his opinion about the ridge that has formed on the top of Rachel's skull. While we were in the waiting room, I counted 23 framed diplomas and certificates on the wall. There was also a lengthy newspaper article about surgery on children's skulls in which Dr. Fearon was quoted in such a way that he seems to be very conservative and not likely to quickly jump on performing a surgery to fix problems. What a relief!

We were both a little taken back when a gentleman opened the door to the waiting room, called Rachel back, then introduced himself to us as Dr. Fearon. It was so refreshing to have a doctor greet us like that and it made us feel a little more at ease. He met with us in his office. He looked at and felt on Rachel's skull. He talked a lot about skull development. He acknowledged the ridge but said that it falls within the range of normal skull development. He expects that as the skull continues to grow that it will likely fix itself. He was so confident about this assessment that he didn't even feel the need to see her again in few months to monitor the progress. Honestly, Stuart and I felt rather sure that this is the response that he would give. However, I can't tell how the relief I felt hearing it from him and how much lighter I felt with that weight of worry being lifted. I don't care that he wasn't covered on our insurance. That was the best money ever spent! 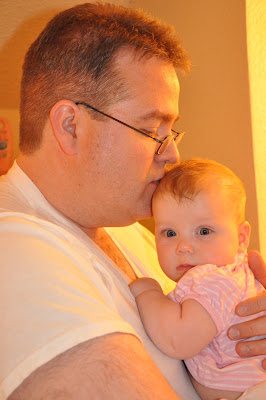 On a further note, Rachel is doing great. She reaches her arms out to try to grab things or when she wants to be picked up. She enjoys being on her tummy and can push herself up onto her elbows. It's so cute to see her doing this in her crib. With the bumper pads around the crib, when I'm standing at the door of her room, I can't see her in the crib. But if she hears me, she will push herself up and just pop her head up high enough to be able to give me a big grin....which of course makes me run over to her and scoop her up in all of her cuteness!

She can hold herself upright if there are some pillows at her back and she can sometimes pull herself back upright if she starts to fall forward. However, she is not ready to stay sitting up on her own. But you can tell she is really trying.

Nicholas and Rachel are still quite a pair. Nicholas loves to hug on and kiss Rachel and tell her all about his day. He is also trying to teach her the names of things around him. He's so cute because he will hold something up in front of her like a shoe and then pronounces the word slowly so she can really understand the phonetic composition of it. He says, "This is a shoe. SSSHHOOOEEE. SSSHHOOOEEE." So cute!
at April 04, 2009
Email ThisBlogThis!Share to TwitterShare to FacebookShare to Pinterest