We have continued to study sound with a new focus on echoes. We learned the scientific reason behind echoes and because bats use echolocation to find their food and get around we have done a whole study on bats (seemed fitting with Halloween around the corner).

We learned about acoustic material and how it can be used to control sound. Here is a simple demonstration we did. The kids share a small bathroom. I had Nicholas shout in the bathroom and asked if he heard an echo. He didn't. 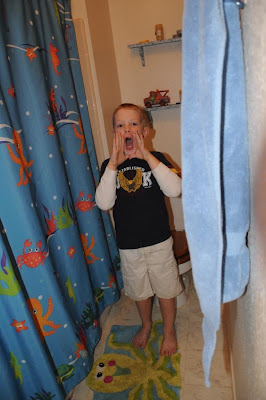 Then we removed the rug, towels, shower curtain and he shouted again. This time he heard an echo! All of the fabric served as acoustic material to absorb the sounds and prevent echoes. Cool! 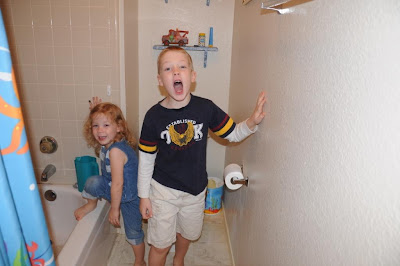 To wrap up on study on echoes, we read the myth about Echo and Narcissus. Echo was a beautiful nymph who often protected the free-loving Zeus by distracting his wife Hera when she came looking for him by engaging her in conversations. When Hera realized what was happening, she punished Echo by taking away her speech. She said that Echo would only be able to repeat the last few words that someone else spoke. Narcissus was a handsome young man who was very vain. Echo fell in love with Narcissus but he rejected her. She was so sad that she ran away to hide in the mountains and caves. She remained there until her body faded away and all that was left was her voice, still doomed to only repeat the last words of those around her.
at October 16, 2011
Email ThisBlogThis!Share to TwitterShare to FacebookShare to Pinterest
Labels: at home, homeschool, Konos, mythology, science experiment