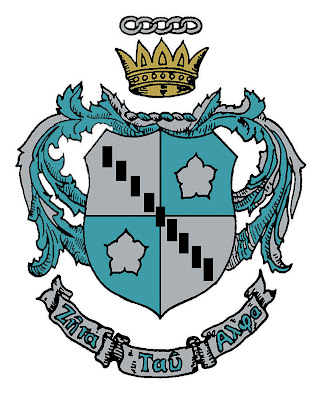 On Oct. 15, 1898, nine young women founded Zeta Tau Alpha at the State Female Normal School (now Longwood University) in Farmville, Va. This October, Zetas across the globe will celebrate these women and the founding precepts of Zeta Tau Alpha.

Zeta Tau Alpha Creed
To realize that within our grasp, in Zeta Tau Alpha, lies the opportunity to learn those things which will ever enrich and ennoble our lives; to be true to ourselves and to those within and without our circle; to think in terms of all mankind and our service to the world; to be steadfast, strong, and clean of heart and mind, remembering that since the thought is father to the deed, only that which we would have manifested in our experience should be entertained in thought; to find satisfaction in being, rather than seeming, thus strengthening in us the higher qualities of the spirit; to prepare for service and learn the nobility of serving; thereby earning the right to be served; to seek understanding that we may gain true wisdom; to look for the good in everyone; to see beauty with its enriching influence; to be humble in success and without bitterness in defeat; to have the welfare and harmony of the fraternity at heart, striving ever to make our lives a symphony of high ideals, devotion to the Right, the Good and the True, without a discordant note; remembering always that the foundation precept of Zeta Tau Alpha was Love, "the greatest of all things."

This past July, over 500 Zeta Tau Alpha members participated in our National Leadership Conference in Indianapolis, where our theme was “Create the Change.”

None of us would have had the opportunity to gather together at NLC or even become members of Zeta Tau Alpha if our nine Founders had not wanted to create change at the Female Normal School in Farmville, Va., in 1898. The campus already had several other sororities and many student organizations and clubs that the young women could join.

“We were not content to be only a club,” Founder Maud Jones Horner said at ZTA’s first Convention in 1904. “Each of us belonged to several already, and they did not satisfy our longing.”

Instead, according to The History of Zeta Tau Alpha, our Founders’ longed for a sisterhood of women who were honest, true, intelligent and scholarly. “We wished to be something stronger and greater,” Maud continued, “to reach far out to have influence wherever we went.”

Our charge to the collegiate leaders who attended NLC was to identify the changes their chapters could make so that they would be stronger and greater and become a positive influence on their campuses.“Create the Change” was not a call to alter our founding principles; to the contrary, it was a charge to return to those principles by changing any practices within our chapters that deviate from them.

Each of us, collegiate and alumnae members alike, has an obligation to challenge cultural trends and popular practices that might steer us off course from our Founders’ intent. Today, I hope every member of Zeta Tau Alpha will pledge to create the change in her chapter, her campus and her community. We must have a commitment to change if we are to make our Fraternity “something stronger and greater” and continue to further the mission, values and purpose that our Founders envisioned.

Given under my hand and seal, I proclaim the fifteenth day of October, in the year of our Lord, two thousand and eleven, as our 113th Founders’ Day.

Zeta Tau Alpha was founded in October 1898 in Farmerville Virginia at the State Female Normal School (now Longwood University) when nine extraordinary women formed a friendship that knew no boundaries. These women, only teenagers at the time, wanted to form a bond that would last way beyond their college years. After the formation of two other female Greek organizations on their campus, these nine friends were determined to form an official organization of their own. These nine amazing women became the founding sisters of Zeta Tau Alpha: Maude Jones Horner, Alice Bland Coleman, Ethel Coleman Van Name, Ruby Leigh Orgain, Frances Yancey Smith, Della Louis Hundley, Helen M. Crafford, Alice Grey Welsh, and Mary Jones Batte.

The symbols of Zeta Tau Alpha are the 5-point crown and the strawberry; our flower is the white violet; our colors are turquoise blue and steel gray. Zeta Tau Alpha is known as a fraternity, not as a sorority. The founders intended Zeta Tau Alpha be designated as a “fraternity” to distinguish the organization from the sisterhoods organized in connection with male fraternities, called “sororities”. Zeta Tau Alpha has no “brother” fraternity.

Maude Jones Horner once wrote, “It is the object of this fraternity to cultivate a higher ideal of womanhood and to encourage all those womanly traits existent in our kind, to give a firmer foundation to those friendships founded on college companionship, to promote sympathy in both sorrow and pleasures, to furnish aid and sisterly advice in our school life.”In 1909 Zeta Tau Alpha joined the National Panhellenic Conference and is currently the third largest of 26 groups. In 1954 Zeta Tau Alpha chartered the Zeta Tau Alpha Foundation. On December 5, 1959 Zeta Tau Alpha was chartered at LSU, starting the Delta Kappa Chapter and a strong tradition of sisterhood.
at October 15, 2011
Email ThisBlogThis!Share to TwitterShare to FacebookShare to Pinterest
Labels: LSU, Zeta Tau Alpha