We had a fun night this weekend! We started with Freebirds World Burrito for dinner. I've never been there but it was good. It was a little intimidating when you first walk up to the counter. It's a design your own burrito and it works kind of like Subway sandwiches but for burritos. There are tons of choices but the guy behind the counter was really nice and patient. The original Freebird size burrito is a really big one...although it isn't as big as their Monster or Super Monster. It's the size that Stuart and I both ordered for ourselves and Nicholas said he wanted that size too. He said the smaller Hybrid size just wouldn't be enough for him. We doubted he could eat a whole original size burrito but we let him give it a try. 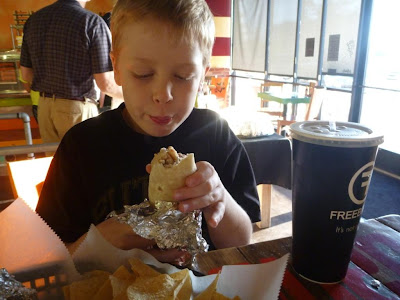 This boy ate the whole thing...plus some chips! He must be on a growth spurt because he has just recently started eating a crazy amount of food.

After dinner we went to a Texas Tornado Hockey game at the Dr. Pepper Stars Center in Frisco. The Texas Tornados are part of the NAHL, the North American Hockey League. These are not professional players like the Dallas Stars in the NHL. These guys are younger and probably working towards getting into the NHL. The games don't have nearly the same atmosphere, excitement, or crowds as the NHL games but they are much more affordable so hockey fans can actually go to several games and not break the bank.

There were some problems with the seats we ended up with and it took forever for the event center staff to bring us tickets for new seats. However, he was apologetic and ended up finding us seats on the first row which is right next to the glass on the rink. They were really great seats! 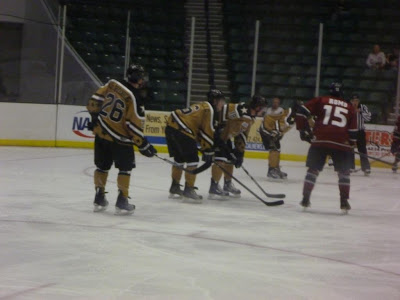 Nicholas stood much of the time and just leaned on the glass. He was a bit startled though when two players slammed into the glass that he was leaning on. Talk about getting close to the action! Look how giddy he was about it! 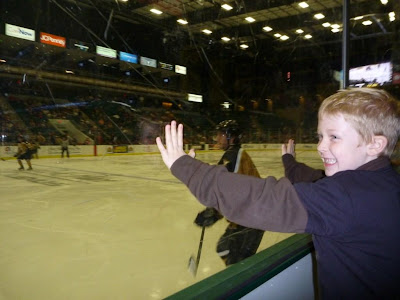 Nicholas has been using my camera a lot for still pictures but decided to adventure into some video. He made several videos where the camera is just blurring all over the place and it's kind of crazy. But once he got the hang of it, he smoothed right into a sports commentator role and took off. Check out this cute video. Note: I have no idea where the English accent came from!

Of course, we had to get a picture of the Tornado celebration after the scored the winning goal in overtime! 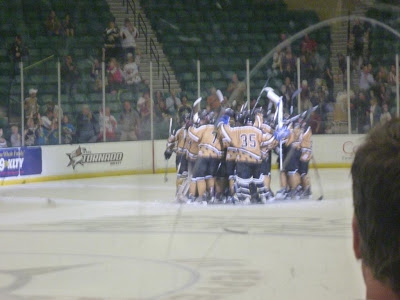 at October 02, 2011
Email ThisBlogThis!Share to TwitterShare to FacebookShare to Pinterest
Labels: hockey