Merry Christmas! We hope you and your family had as wonderful a day as we did. I'm sure Santa made his rounds to your house.

He certainly came to ours.

Fortunately, Rachel wasn't awake to see it because he would have just made her cry.

We only got this picture of her smiling because she didn't know Santa was standing right behind her. He's good at sneaking in from behind! 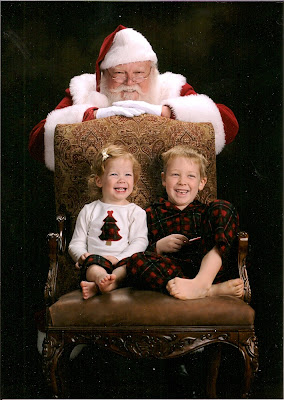 Rachel wouldn't sit on Santa's lap for anything.

He even tried to lure her over to just stand next to him with the promise of a candy cane. She walked up to him until she got a foot or two away from him and then she wouldn't go an inch further.

She still wanted that candy cane though.

So she held her ground and leaned her little body over as far as she could and S-T-R-E-T-C-H-E-D out her hand to that candy cane. 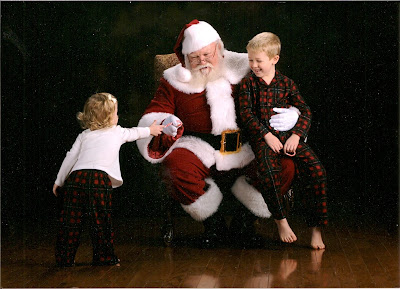 But that's as close as she would get to the man in the big red suit.

Not an inch closer.
at December 25, 2010
Email ThisBlogThis!Share to TwitterShare to FacebookShare to Pinterest