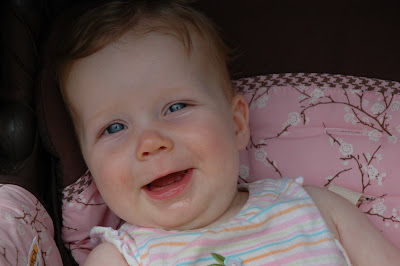 Rachel is 7 months old today. Oh how I wish time would just slow down. I want to treasure these days forever but they just keep slipping through my hands. I already long for the days when Rachel was just a little newborn and would melt to my body as she fell asleep in my arms. Each day brings wonderful and exciting new discoveries for her and it's a blessing to be able to share these with her. But at the same time I just want to keep her as my little baby forever.

Rachel is doing great. She is drooling a lot and her lower gums look a little paler so there might be a tooth or two on its way. She is still nursing great and eating a wide variety of baby foods. The whole baby food thing is still just as messy as ever. We go through lots of bibs and wipes each day! She has also graduated to the little Gerber puffs which are kind of like little cereal pieces but they dissolve in the mouth to prevent babies from accidentally choking on them. We started out putting them in her mouth one at a time because she had no idea what to do with them. Now I can put some down on the tray of her high chair and she will get some into her mouth on her own. She is still figuring out how to work her hands and little fingers though. She will kind of scoop up several puffs in the palm of her hand but then struggles a bit to get them from her palm into her mouth. She will twist her hand around at her mouth until she gets some. But often we find puffs stuck to her clothes, her arm, shoulder, and yesterday I found one in her ear! But I think she is able to eventually get most of them in her mouth.

She is growing quite well and is wearing 9 - 12 month clothes. She has lots of baby fine hair which is a light brown but still seems to have red highlights when the light hits it just right. Her hair is growing out and although is long enough on top to stick up in places that it shouldn't. However, there still isn't enough of it to keep a barrette in place so she often has some pretty wild hairdos. Headbands work well to keep the stray hair in place but she often just pulls those off.

She still doesn't take a pacifier so I've given up trying to use it to soothe her. But fortunately she doesn't need to be soothed very often. When she is sleepy she starts sucking her thumb. It's the only time she bothers with sucking her thumb and it is an easy sign that it's nap time for her. I love it when she puts her head on my shoulder and starts sucking her little thumb as she is trying to go to sleep. I call her my little Cuddle Bear. She is just so sweet to cuddle with. When I put her in her crib, she puts her thumb in her mouth and rolls to her left side to go to sleep. So cute!

I also call her Squirmy Worm because she can be quite squirmy like a little worm that flops all around after being pulled out of the dirt. She especially likes to squirm around when I'm changing her diaper - not fun for Mommy! She isn't crawling yet but she is so close. She will push her body up and try to get her knees going but she hasn't quite figured out how to make it all work together. But that doesn't stop her from travelling across the room! She will be playing on her mat as I'm working at the computer. A few minutes later I look at her and she is on the other side of the office. I like to watch her because she will roll herself over to travel where she wants to go. She can also scoot herself around a little, kind of like a commando-type crawl. We really have to keep a keen eye out for all of Nicholas' little toy pieces that could possibly be within her reach and become a choking hazard.

Rachel is sitting up well. And she loves it. However, I still sit with her to help catch her if she falls because she still falls over often. If there is something to the side of her that she wants to pick up, she will lean over to reach for it and just flop over on her side.

Rachel just loves her big brother. He can make her smile when nothing else can. And he loves her too. He is so proud when I bring her into his class room. He makes sure that everyone there gets to see her and he loves to tell them little stories about the things she does. He also loves to show her things and try to teach her what he knows. He said this morning that he can't wait for her to be old enough to play "ships" (aka space ships) with him.
at May 20, 2009
Email ThisBlogThis!Share to TwitterShare to FacebookShare to Pinterest