A Love For Little Containers

Nicholas just loves to put small toys into larger containers. He uses them for general storage but also to carry little toys from downstairs to upstairs or from his room to the bathroom to play with in the shower or to carry little toys from the house to the car (although he never seems to return the toys from the car to the house so my car is literally a toy box of its own!). He uses little toy fishing nets, drawstring bags, little shoe boxes, a hat, zippered pencil bags, recycled cigar boxes from a local cigar shop, backpacks, and of course his pants pockets (there's no telling what curious items I will find in the botton of the washing machine when I finally have time to do a load of laundry).

Today I was helping him pickup the playroom and I went to pick up Gears, his robot that we made out of recycled food packaging (water bottles for arms/legs, deli meat package for head, Sam's sized packaging for deodorant for his body, and box from Lever soap for feet). 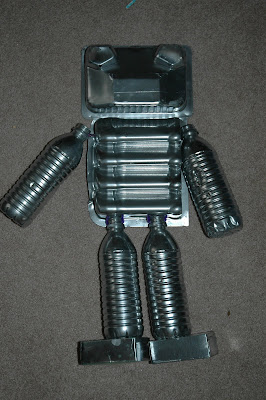 I heard this strange rattling sound as I picked him up. Gears is supposed to look like a robot but he doesn't have any internal workings that would have come loose to rattle around in there. What could it be? I checked him out further and found two Star Wars action figures stashed away in Gears' head! 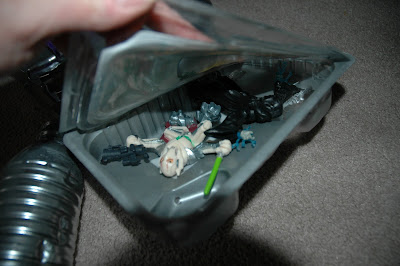 Now Nicholas already has a perfect storage container for his action figures as seen in this previous post. So I asked him why he was keeping these two in Gear's head. He simply said, "They are sleeping." I wonder if the other characters in his primary storage container were getting a little too rowdy for General Grievous and the Emperor so they decided to escape from the pack and catch a little shut eye in Gears' head.

It's just so interesting how little minds work and how fascinating when they find new and creative uses for such simple things around them. So if you have a little box or bag that you are about to toss away, maybe you could just hang on to it for Nicholas. I'm sure he will find a good use for it.
at May 11, 2009
Email ThisBlogThis!Share to TwitterShare to FacebookShare to Pinterest