Today we went to the Main Street Days festival in Grapevine. It is a typical street festival full of arts and craft vendors, food, and carnival rides. I haven't done a festival like this alone with both kids but figured it couldn't be too hard to manage. Wrong! Our usual parking lot near the entrance was full so I had to park far away at the Convention Center. I wasn't excited about walking with Nicholas and the stroller to the festival considering the extra traffic that was all around us so I got in line for the shuttle bus to take us there.

Ugh! That wasn't fun. It had taken me about 10 minutes to get the stroller set up, strap Rachel in, fill the storage under the stroller with water and supplies, attach the diaper bag to the stroller just so, etc. Now in order to get on the shuttle, I had to take all of the stuff off of the stroller, take Rachel out, and while holding Rachel with one arm, use my other free hand to collapse the stroller and get it on the shuttle bus while also keeping close tabs on Nicholas. Not fun! Eventually the driver saw me struggling and came to help! Thank goodness! We might still be there struggling with that thing if he hadn't. Of course, repeat all of this fun three more times as we exit the shuttle at the festival and then the whole shabang again on the way home.

After all the work it took to just get into the festival, we were all hot and tired as soon as we got there. Nicholas found a great sno-cone place to cool off. He got a giant sno-cone and got to add his own syrup to it. What fun! There were about 8 flavors to choose from which of course meant that all 8 flavors had to go into his one sno-cone. It was very colorful and super sweet - just the way he likes it! 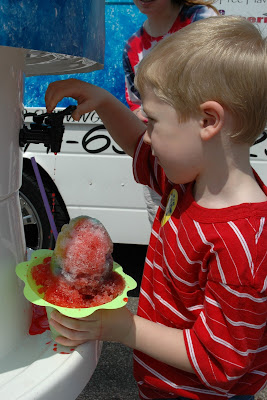 We ran into some friends while we were walking around. Here is Nicholas and his friend as they were discussing whether either of them was tall enough to ride the Starship ride. Unfortunately they were both just a couple of inches too short. 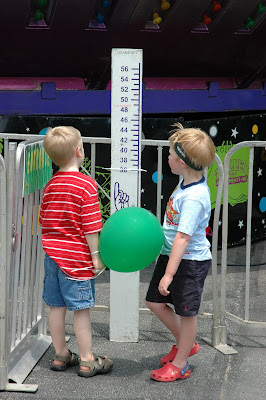 I'm so grateful to my friend who watched Rachel in the stroller for me while I took a special ride on the ferris wheel with just my little guy! We had fun looking over the whole festival from way up high.

Next Nicholas wanted to check out the petting zoo...at least he thought he wanted to. As soon as he went in, he got scared of the goats and grabbed his friend's shirt and hid behind him. I don't know where this silly fear came from. He used to love petting zoos but recently seems much more afraid of animals, even dogs! 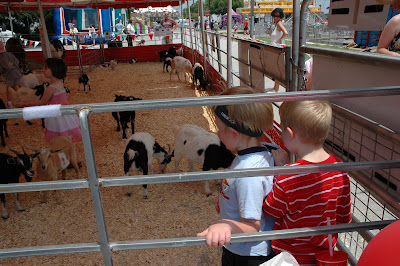 As we were walking around with our friends, Nicholas and his buddy started playing around and giving each other "Indiana Burns"! So cute!

Miniature golf was a lot of fun. Nicholas really liked this hole where he had to hit the ball into the house and it came rolling out the other side. Here he is helping to coax it into the hole. 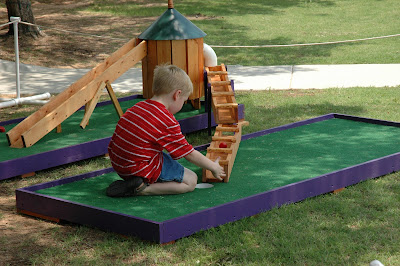 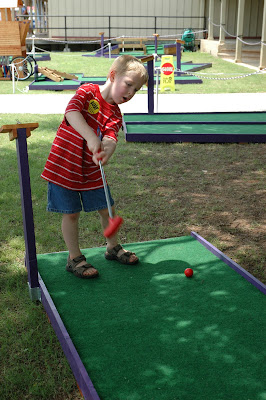 Nicholas saw the kayak tank and got all excited. "Mommy, I HAVE to ride in a boat!" He ran up and got in line and never looked back at me. He had such confidence and I don't really know why. He's never been in any kind of small boat like this before and here he was doing it all by himself with no instruction. I don't think he's ever even seen anyone in a kayak or canoe - except maybe on a Go! Diego! Go! cartoon. For whatever reason he found this passion, I was beaming with pride for my little guy. (I was also a bit jealous because I wanted to get in one too but SOMEBODY had to stay on land with Rachel!) 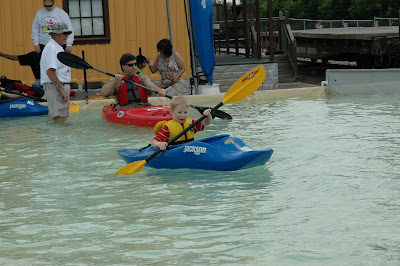 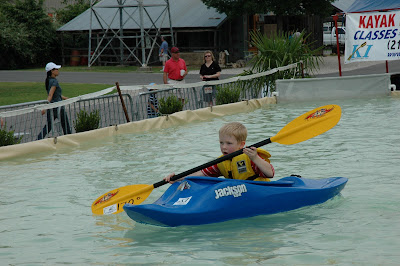 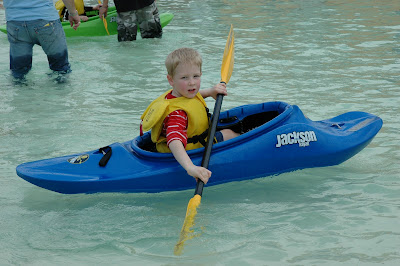 It was a fun day. Both kiddos made it home safely and unscathed - even sunburn free. But Mommy did not do so well herself. I was dehydrated, sunburned, and exhausted by the time we finally left. We got home and cooled off only to turn around and head out to soccer practice a short time later. I love the fun but busy days.
at May 16, 2009
Email ThisBlogThis!Share to TwitterShare to FacebookShare to Pinterest