We reviewed our Bible verses on trusting God and how God's laws are constant and can be trusted. We read books about floating and learned about buoyancy. These are laws of the physical world that we can rely on, that we can trust. 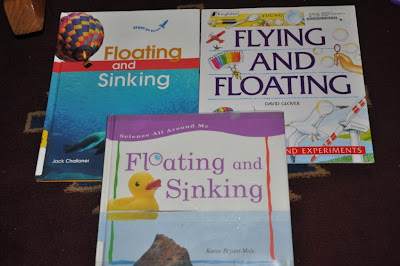 We started with a big tub of water and lots of little objects. The kids each made predictions about whether they thought the object would float or sink. 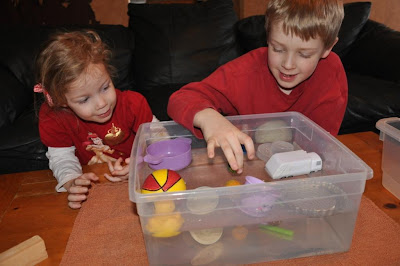 Of course, there was a lot of just playing in the water. What is the force that draws kids to play in water? 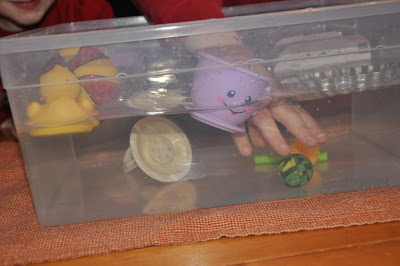 They were both really excited about this experiment and kept finding new items to test out. 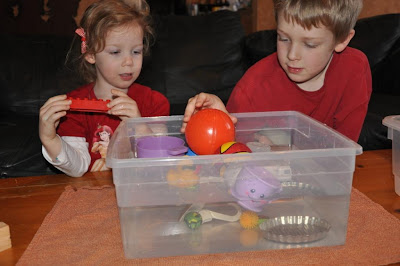 I love these kinds of projects where Rachel can be involved too. She is old enough to have a basic understanding of floating and sinking even if she isn't learning the details of "why" as Nicholas does. 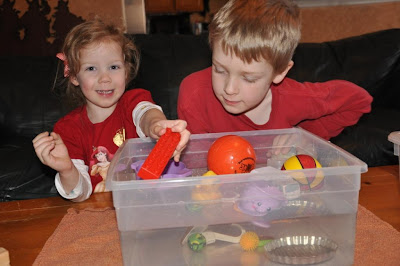 It was fun just watching them get excited about watching to see if their predictions were correct. 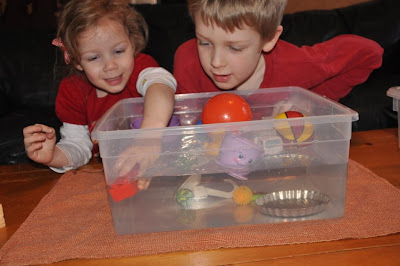 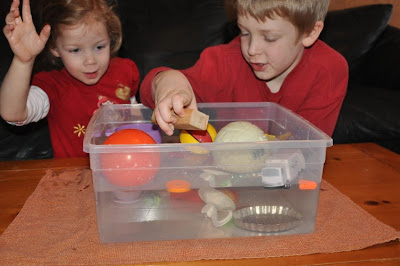 For the most part they did rather well. 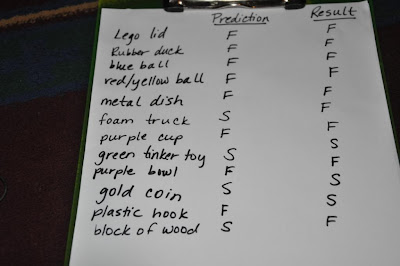 So what makes an object float or sink? Is it the size?

Nicholas found two objects that were about the same size to test this theory. One was a rock and the other was a hollow plastic bale of hay. What do you think will happen when they are both placed in the water? 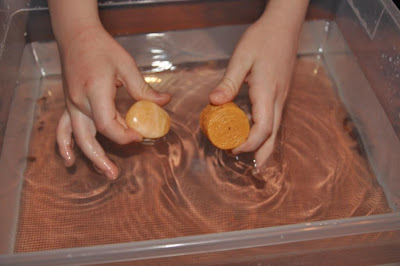 The rock sinks and the hollow plastic toy floats. Therefore, it is not just size of an object that determines whether something will sink or float. 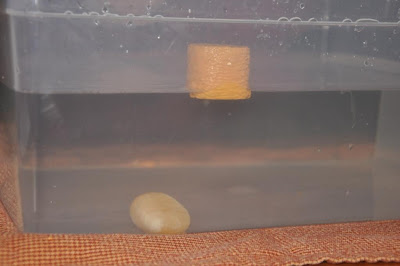 I love the way Nicholas' mind works. Before I even got into much more discussion about it, he is already working on solving the problem. He figured out that although the rock sank on its own, if it was placed in a shallow plastic lid that floated then the rock was able to float too. 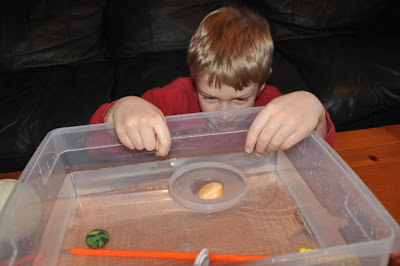 He then used a suction cup hook that we had previously used in our float/sink test to make his floating rock stay anchored in one place. 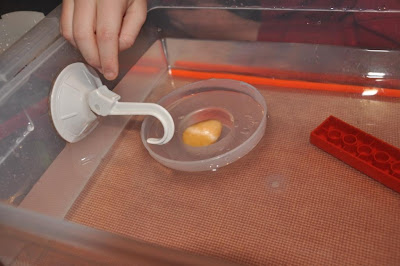 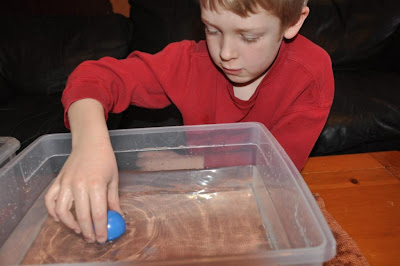 We also discussed why we thought large boats that seem like they would be heavy could float. It's because large items like a boat are not solid. Most of their volume is filled with air and therefore they are light compared to the amount of water that they displace therefore they float.

I cut several squares of aluminum foil, all the same size. I asked them to create boats that would float. 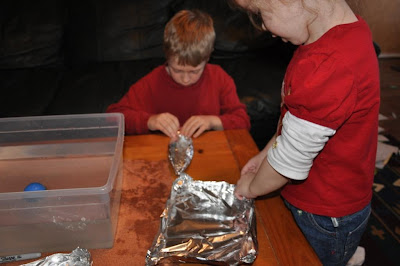 Nicholas made a great looking boat that floated. 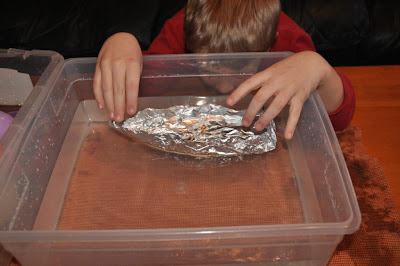 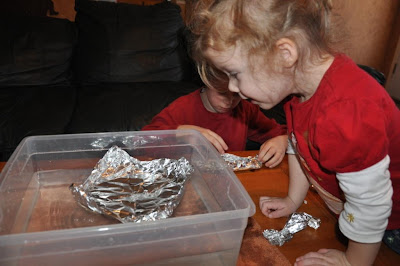 But then she wanted to see what would happen if she pushed down on her boat...and then it started to sink. 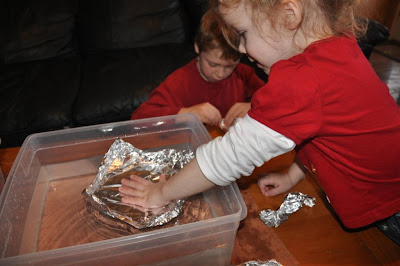 Yes, she was just playing but it was the perfect demonstration of what we had been talking about. By pushing down on the boat, she increased the pressure of the boat pushing down and it was now pushing down harder that the weight of the displaced water so it sank. 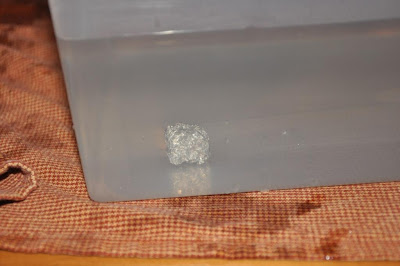 Nicholas took one of the other pieces of foil that was the same size as that with which they had made their boats. He crumpled it up tightly in a ball. I had to help him really get it tightly crushed but he then put it in the water and it sank. (Notice the cute sail he has added to his boat by now) 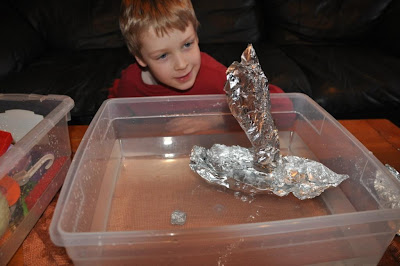 Two pieces of the same material reacting differently in water. The boat is large, flat, and full of lightweight air so it floats. The ball is small and dense therefore making it rather heavy for its size and the amount of water that it displaces. Because we crunched it up very tightly, there is little to no air in it. It sank. 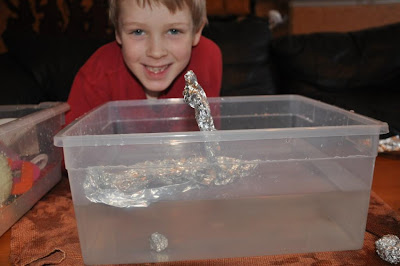 Again, Nicholas likes to come up with theories and test them on his own. He decided to see if the ball of foil that sank would float on his boat or make it sink. It floated! What a great demonstration for the principles I was teaching. Thanks little buddy for making my job so easy! 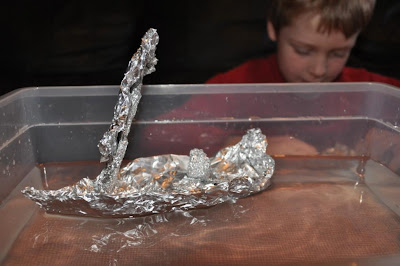 Then he made another large flat boat with a propeller at the back. He put two plastic jets on it and it floated. He created his own aircraft carrier! I love his imagination! 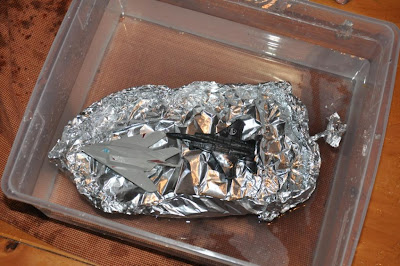 They were having so much fun experimenting with water, foil, floating, and sinking that I eventually had to get a second tub of water out for them. 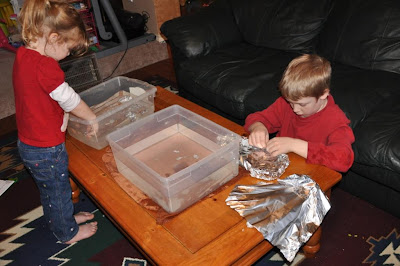 Sometimes Discovery Learning can be messy but when you see the light go on as your child is learning by doing, you will know that it is so very worth it! 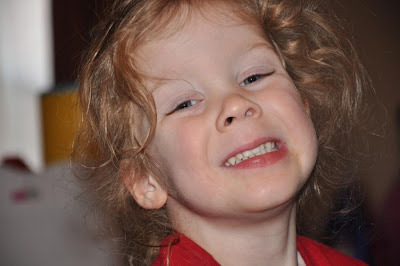 Some ask how I can teach a 3 year old and a 7 year old at the same time. Rachel definitely learned a lot with our floating and sinking activities. But her attention span isn't as long as Nicholas and there are some things that we study that she just won't understand. So while she is either napping, playing, coloring, or working on some other activity that I've given her, Nicholas and I spend time one on one going more in depth into the subject we are studying.

We spent a few afternoons studying Archimedes. He is a key figure in this unit because he was one of the first researchers to discover water displacement. Nicholas loved the well-known story of how Archimedes got into a bathtub and noticed the water overflowed the edges of the tub. As he thought about how his body had caused that he realized how water displacement could be used to study weights of objects and even solve a problem he was working on at the time for the king. He was so excited that he jumped out of the tub and went running naked through town shouting "Eureka!".

We found these two books and a DVD at the library. The DVD sparked our interest in the lost notes of Archimedes, called the Archimedes palimpsest. We looked that up online and found this great video on the PBS website called Inside Archimedes Palimpsest. 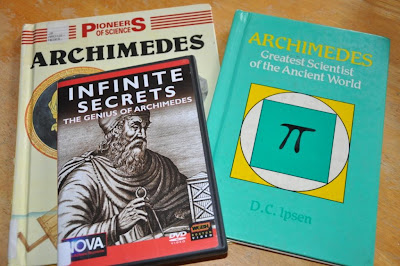 Next we will be taking our knowledge of floating and learn how it applies to boats.
homeschool imagination Konos Nicholas Rachel science experiment