What a great day to get outdoors!

We headed over to Heritage Park in Grapevine for a picnic and play time.

Nicholas took care of planning all of the details of our picnic. The kids scarfed down their food in a blink so they could go play.

They love this park particularly because of this giant spider web climbing thing. It is really high but super cool. It's always the first thing Nicholas does and he shimmies straight up to the top. 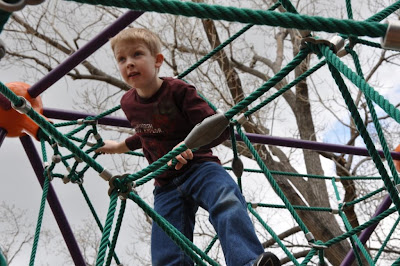 Rachel usually doesn't go very high but this time she went higher than ever. She's quite brave! 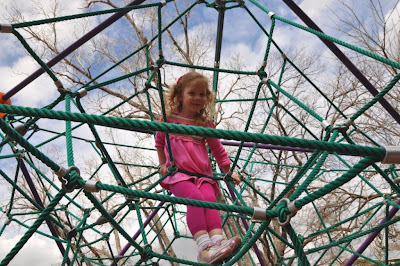 Nicholas, of course, had to climb on top of the tunnel just to be a daredevil. 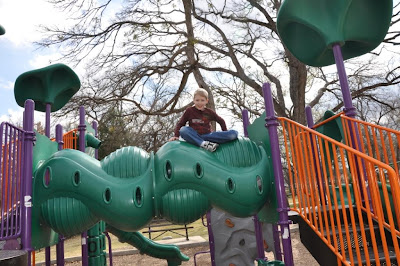 Once in the tunnel, he kept peeking out at me waiting for me to snap his picture. 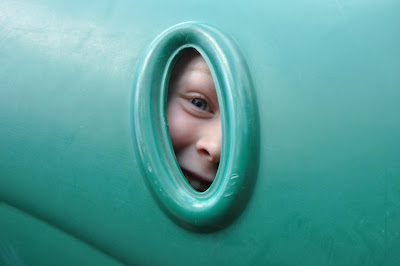 Of course, if there are swings then Rachel wants to swing. She usually sits in the regular swings but she's been playing up a little regression these days. She insisted on sitting in the toddler swings. I didn't really mind because the bigger swings were too high off the ground for her to climb into on her own. 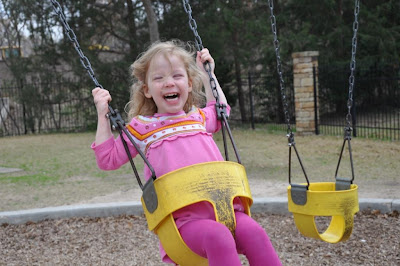 I pushed her at first to get her going but then told her she had to pump her feet. She knows how to do it but lately she would prefer to just have me push for her. Look at that pouty lip! 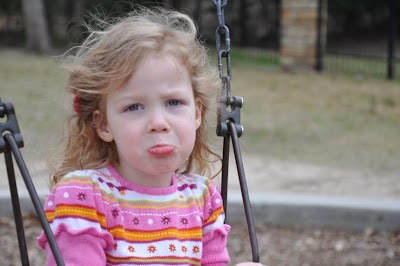 Nicholas tried to show her how high she could go if she would just pump her legs but she continued to sit and pout. 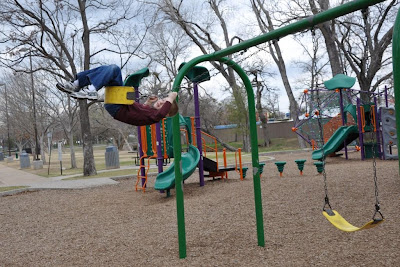 After some time at the playground, we walked over to the Grapevine Botanic Garden.

Rachel was fascinated with the waterfall that splashed down right at her feet. 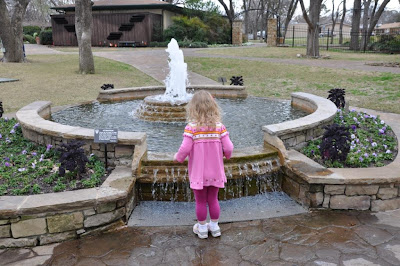 Look! I touched the water! 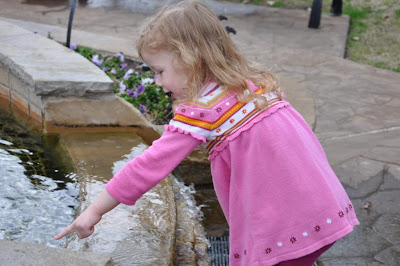 The gardens are still bare from winter but they are still pretty. 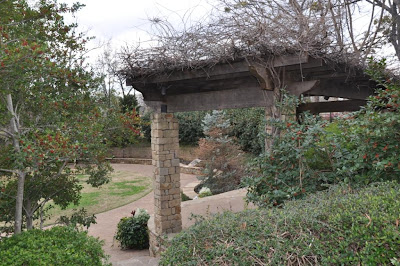 I could see several plants with new buds on them getting ready for spring. 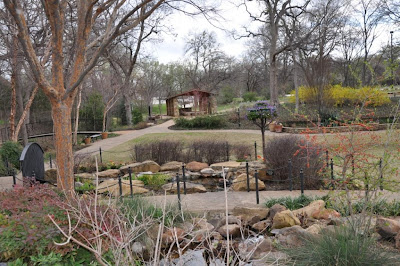 The kids spent a long time watching the GIANT koi fish. They are always a favorite attraction especially the ones hanging out under the little bridge. 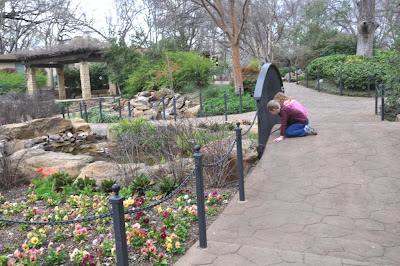 There are lots of soothing waterfalls. 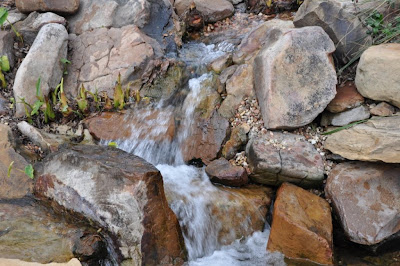 Of course, a boy can never be far from a stick. Nicholas used this one to try to arrange some little pebbles on the bigger stones. 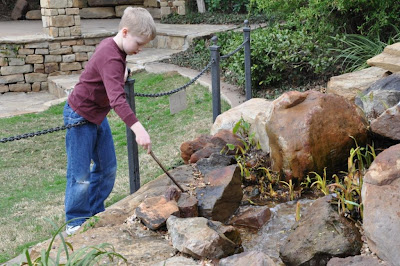 He is the "last child in the woods". He is so at home outside in nature. 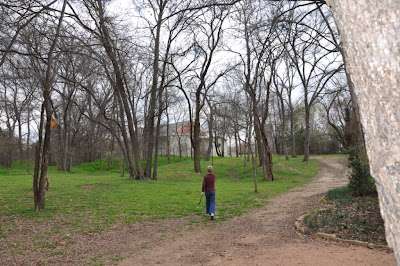 This picture cracks me up! We found these three vultures snacking on a dead something (something very very stinky). Nicholas tried to sneak up on them and thought he would hide behind this tree. It's a little bit hard to tell from this picture but the tree is way to narrow to hide him! It was so funny because he thought he was being so stealthy. 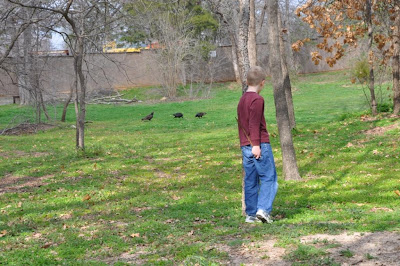 Rachel enjoyed just running around in the wide open spaces. 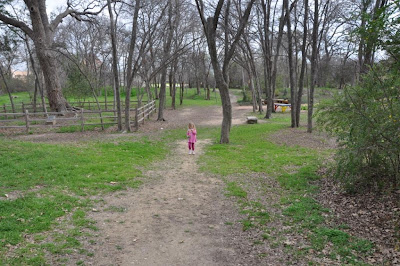 We learned about composting in the Compost Corral. 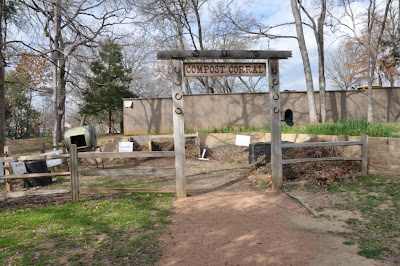 Nicholas wanted to crawl into the tumbler composter so I could spin him around. What is he thinking?! 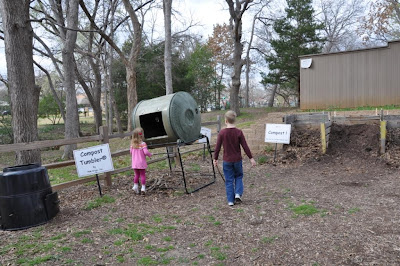 I've always wanted to make our own compost but it's just sitting on that long list of other things I wish I had time to do. 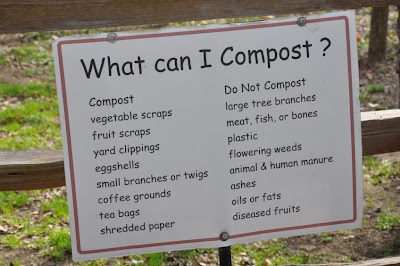 I love to see new growth sprouting in anticipation of spring's arrival. 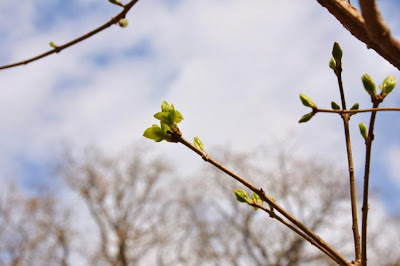 The kids discovered new fun in the pea gravel making the pathways. We must have spent 30 minutes here as they just scooped up gravel and made paths and creations. 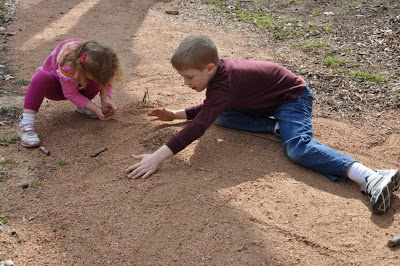 Nicholas made this cool bug with antennas. There was lots of wonderful unstructured play today. 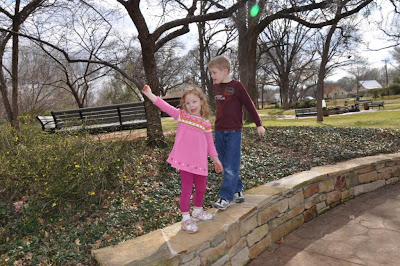