My Boys on the Cub Scout Stage

February 24, 2012
Tonight both of my boys were on the stage at our Cub Scout Pack meeting.

Stuart enjoys being Assistant Cubmaster. He helps to plan and run the Pack meetings and Troop outings. Recently he has been giving the Cubmaster Minute which is at the end of the meeting and usually presents a thought or short story that sends everyone home with inspirational ideas to think about. 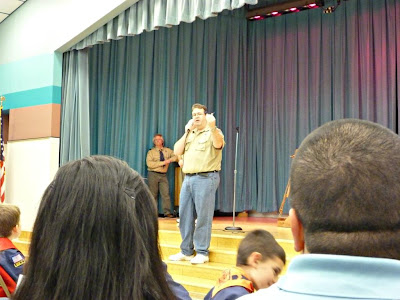 Tonight he talked about Resourcefulness. He held up a little piece of wire. He asked the audience, "When you see this, what do you see?". He explained that some people may see nothing important, but when twisted and turned, that little piece of wire can be useful. It could be used as a paperclip, a twist tie for for closing a bag, or it could join with other pieces of wire to tie things together. It could even be used to keep shoes on for a short time.

He wrapped it up by saying that we all have strengths, talents and other potential hidden inside us. But we can be resourceful and help remove the things that are blocking them in and help others bring out their own potential and talent as well.

Get creative. Be resourceful. I think everyone could be inspired by that message.

At the Pack meeting, each den is called up on stage and given various patches, belt loops, and pins as awards for tasks they have completed since the last Pack meeting. Nicholas is used to getting on stage for this but he hasn't used the microphone to speak in front of a crowd before. However, tonight he was asked to speak the closing ceremony.

He was a little nervous but you couldn't tell. 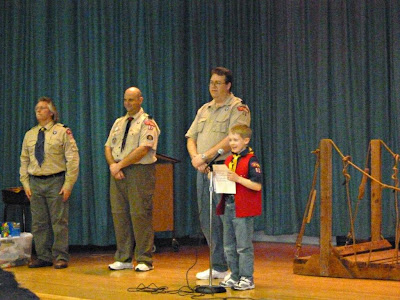 I was really proud of my boys tonight!