I'm feeling a little homesick today. Today is just another Tuesday for most people in North Texas. But back home, this is no regular Tuesday. This day is Fat Tuesday, aka Mardi Gras! The big celebration of food and drink and merriment before the beginning of lent. But you don't have to have any particular religious belief to get a kick out of a good Mardi Gras celebration and parade.

So much goes into planning for this day. It really takes a full year to bring it all together. Back in 1988, I had the priviledge of being a maid in the Krewe of Romany ball. The theme that year was Winter Wonderland and my costume represented a Jingle Bell. There were bells all over the "wings" and head piece. The costume designer was an interesting guy and I never understood why I had wings as a Jingle Bell. But then again, I was in high school and really didn't care. I was just excited to wear the cool costume up on the stage at the big Mardi Gras ball. I still don't know how much Dad had to pay for that custom made costume (but thank you Dad!) 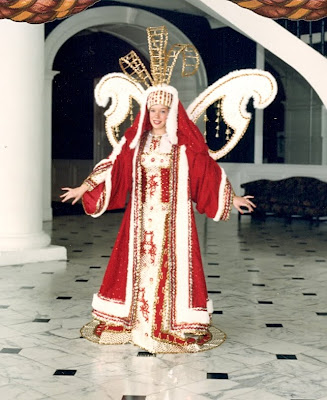 Being a part of the Krewe, I attended functions for a whole year before the actual Mardi Gras ball where I would be "presented". I got to hear a lot of inside scoop about other Mardi Gras krewes and all that goes into pulling off such an extraordinary event. It was a great experience.

I have so many memories of my family driving down to New Orleans for the Mardi Gras parades. My poor Dad's shoulders hurt from having to take turns letting my brother or me sit up high so we could see everything going on and get more strategic position for catching beads. We would yell "Throw Me Sumpin', Mister!" as the incredibly beautiful floats drove by. We always caught some great beads and goodies from the New Orleans parades. One year we even made it down to N.O. early enough to go to the Zulu parade. My dad lunged for a decorated Zulu coconut, the most prized Mardi Gras throw. I remember fearing for his life as a mob of other big guys also lunged for it. But Dad emerged from the heap with coconut in hand and a few grumpy stares from the other not-so-lucky coconut seekers. I still have that coconut stashed away in my boxes of memories. Some of the gold paint and glitter have worn off but it's still an authentic Zulu coconut...and a memory I'll never forget.

I miss New Orleans Mardi Gras. There is really no other party like it in the world. I want Nicholas and Rachel to have a sense of the fun that I grew up with but that's hard to do when we are so far away. So when I heard about a Mardi Gras parade in Lake Dallas tonight, I packed up our crew (or krewe) and headed over there.

It didn't compare to any New Orleans parade. But there were decorated floats and even a marching band. 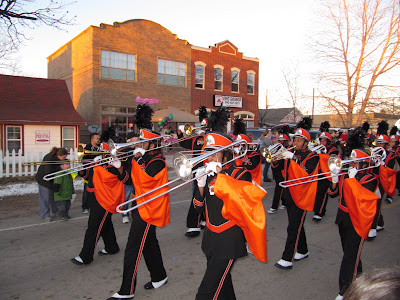 Nicholas jumped right in with calling out for beads. No one said, "Throw Me Something, Mister" but instead they just called out, "Beads! Beads! Beads!" It all had the same effect. 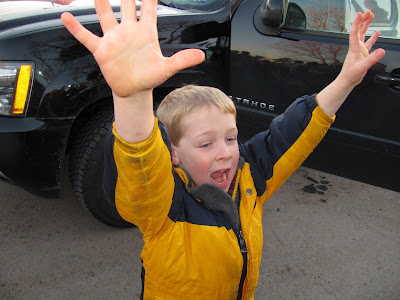 I'm not sure why the giant inflatable Geico Gecko was at the Mardi Gras parade but Nicholas just had to get his picture taken with him. 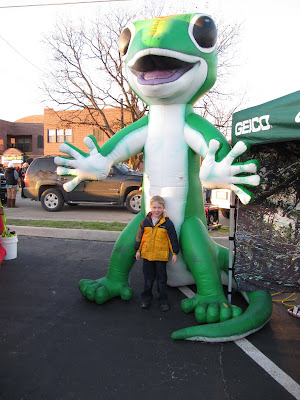 We had some fun in the kids zone where there were bounce houses and a climbing wall. 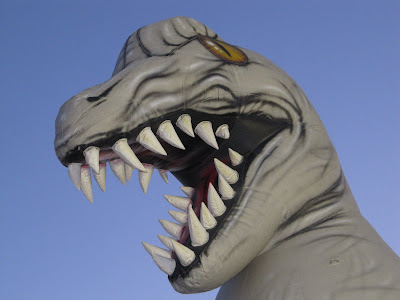 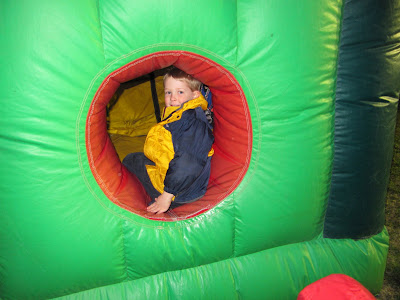 There was some good cajun music from a live band and there was a restaurant booth cooking up some boiled crawfish with corn and potatoes. But it all just made me that much more homesick.