Rachel turned 3 months old today. I can't believe how quickly the time has flown. My dad recently reminded me how it seemed like just yesterday that I was still pregnant with her and it was three months until from her delivery date. At the time it seemed like it would be forever before I could finally be able to meet her and hold her in my arms. Now she's been her for three months already and the time is flying by too fast. I already miss that sweet little newborn stage.

Rachel will bat at a toy that is close to her and she will grab a toy if you brush it up against her hand. While she was lying on the bed, Nicholas gave her this little toy to play with and she gripped it right away. This was the first thing I've seen her really hold on to. 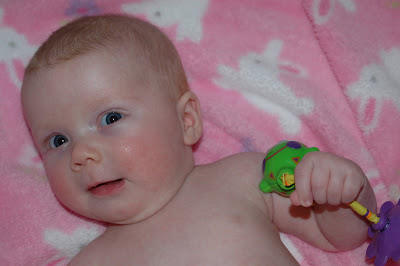 Rachel isn't very fond of tummy time. She will grumble a little and try to roll over to her back. She can rock her body a little and she lifts one leg as if she is trying to pull her body over but she can't quite do it yet. (Yes, that earlier roll over that she did soon after she was born was some kind of crazy luck. I still don't know how she rolled over when she was so young. I think the comforter on the bed must have been bunched up and gave her something to push off on because she hasn't been able to do it since.) Rachel loves to look at faces and she smiles and laughs when people smile or talk to her. She tries to talk to you as well but just ends up making the cutest little babble. She likes to be read to and look at pictures in a book. She loves being outside. 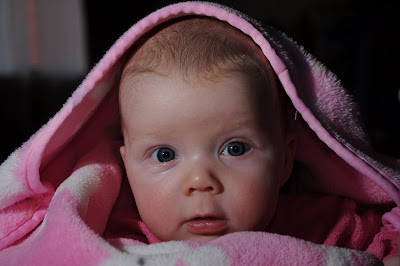 Rachel still refuses to drink from a bottle and she won't take a pacifier. However, she has discovered that her hand is a nice thing to suck on when she wants to soothe herself to sleep. But she sleeps through the night beautifully and still naps a lot during the day. She gets so excited when she wakes up and someone comes to get her out of her crib. 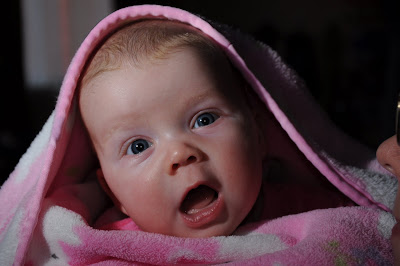 Rachel loves her big brother. As I was changing her diaper this morning, Nicholas came in to tell her good morning. When she saw him she let out the cutest little squeal when she saw him.
at January 20, 2009
Email ThisBlogThis!Share to TwitterShare to FacebookShare to Pinterest