My baby is spoiled. She took to breastfeeding rather quickly at the hospital and has thrived on almost nothing but breastfeeding since then. The only exception was for a few days when I first got out of the hospital that she had to drink formula from a bottle because I was on some pretty strong antibiotics due to an infection in my c-section incision.

Now that she is 2 months old, I'm taking her out and about on excursions with Nicholas and out to restaurants and everywhere I usually go. This can be challenging because breastfed babies usually need to be fed every 2-4 hours since breastmilk is digested more quickly than formula. I have a nice drape that I can cover myself with so that I can nurse her in public but I just don't have the courage to do that right in the middle of the mall even though no one would see a thing.

So I've started pumping some of my milk so that I will be able to give Rachel a bottle if she gets hungry while we are out in public. Sounds like a great plan. We've known that Rachel isn't very fond of a pacifier but now I've recently learned that she also isn't fond of drinking from a bottle. And actually, she's more than "not fond" of it. It actually makes her quite mad as if we are giving her some inferior product.

I thought the problem was that I was holding her and trying to give her the bottle. I can see how she might be confused when what she is expecting is right there but here I am giving her a bottle. So I asked Stuart to try to get her to take the bottle to hopefully eliminate any confusion on her part. It didn't work. She mouthed on the nipple for a bit then got mad. 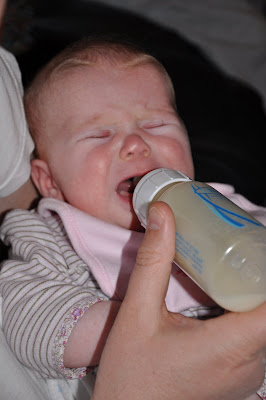 I don't understand. I'm sure some milk is dripping into her mouth so surely she can tell that it is the exact same milk she drinks all the time. Why doesn't she just drink it?! It would make my life so much easier. How many babies do you know that don't like a bottle? I didn't think it was possible. Surely ours is the only one.
at January 02, 2009
Email ThisBlogThis!Share to TwitterShare to FacebookShare to Pinterest