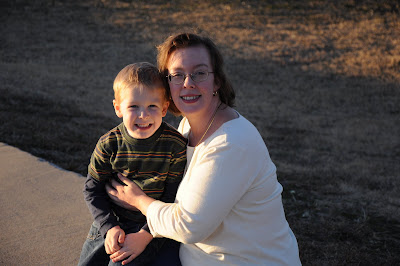 This weekend we got a lot of quiet family time at home but we also spent some good time outdoors. We had a picnic at the duck pond and then went for a walk on one of the many trails in town. There were a lot of people out because the weather was so great.

As people on bicycles would ride up behind us on the trails, they would often call out, "passing on the left" to give us warning that they were about to be riding alongside of us. Nicholas asked us to explain why they did that. Once we told him, he decided to create a game in which we would run past each other while calling out "passing on the left" or "passing on the right". Of course, you should always want to be the leader so if you got passed up then you were supposed to try to run past that person so you could be the leader once again. Whew! That boy can run and run and never get tired! Not so for Mommy and Daddy :)

Nicholas and I also found a lot of great sticks on the walk. Some even had some cool curly-q leaves still attached to them. Nicholas insisted we bring home with us to add to his collection. 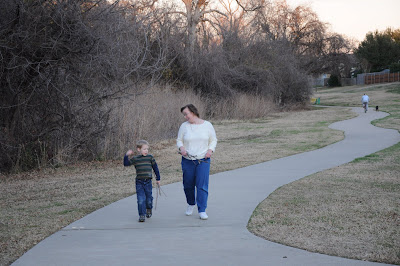 Nothing beats a quiet weekend spent outdoors with your family!
at January 19, 2009
Email ThisBlogThis!Share to TwitterShare to FacebookShare to Pinterest