It hardly seems like Halloween. We have a few decorations up. Nicholas has carved a pumpkin and been to the pumpkin patch. Nicholas and Rachel both have great costumes. We have a big cauldron full of candy to hand out. Yet it still doesn't feel like it's Halloween. I guess we've just been so distracted by all of the other things going on in our house that we kind of missed the build up of the approaching holiday somewhere along the way.

We started the morning with some usual playtime. Nicholas wanted to play with his puppet theater but Daddy was cooking breakfast and I was trying to take care of Rachel who was a little fussy. I'm determined not to let Nicholas feel pushed aside by his baby sister so I plopped down on the kitchen floor with fussy baby in hand and produced a one-handed puppet show about a mischievous little boy who hid in bushes on Halloween night to scare his friends. When they dropped their bags of candy, the naughty little boy would take it all for himself. Greedy little guy! Stuart was amused by my attempt at multi-tasking and had to get a picture. 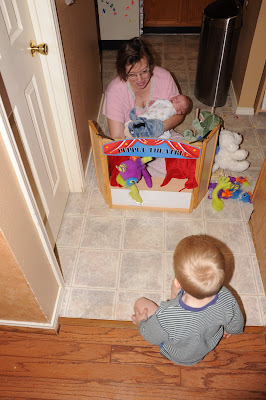 Time to get ready for trick-or-treating. I bought several costumes for Nicholas this year so he would have something for Halloween but also have others to play dress up with throughout the year. He has Darth Vader, a skeleton, Teenage Mutant Ninja Turtle, Wizard, Doctor, and a Pirate. Yet he still couldn't decide what he wanted to wear for trick-or-treating. He even borrowed a costume from a friend because he thought he would be a Power Ranger. At the last moment, he decided that he would wear the wizard costume. He made a cute little wizard! Of course, Rachel was pretty cute as a sleeping bumblebee too. 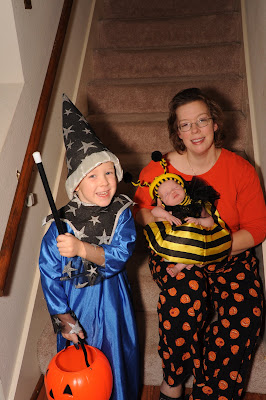 Nicholas and Daddy had a great time trick-or-treating around the neighborhood. Nicholas got tons of candy as always. Mommy and Rachel sat on the front door step and handed out candy. Although she slept through her first Halloween, Rachel was a big hit in her bumblebee costume. Many people thought I was holding a baby doll at first and they were all "oooh and aaah" when they realized she was a real little baby. 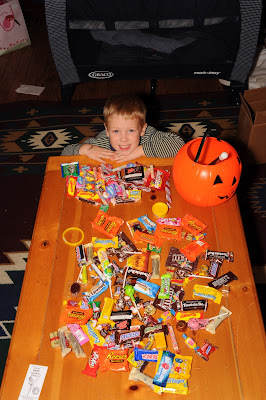 at November 01, 2008
Email ThisBlogThis!Share to TwitterShare to FacebookShare to Pinterest