When I packed my bag for the hospital, I put in two two wrapped gifts for Nicholas. Once Rachel was born, we let him open one gift a day and we told him they were a gift from his little sister. He loved getting to unwrap presents but he questioned whether they were really from Rachel. He said that we must have bought them for her since she is too little. Well, that may not have worked out like I had planned but he was still happy to have gifts to unwrap and it helped him feel special even though Rachel and I were getting a lot of attention.

Once we were back home, Rachel and I were still getting a lot of attention so I had one last gift from Rachel planned. It was such a hit! It is called a Silly Monster Puppet by Melissa and Doug. It is a purple hand puppet with just a mouth. It comes with all sorts of silly eyes, noses, hair, ears, etc that you can velcro on to your puppet anyway that you want. Daddy makes a great "monster puppet" voice and he and Nicholas have had lots of fun playing with the new puppet! 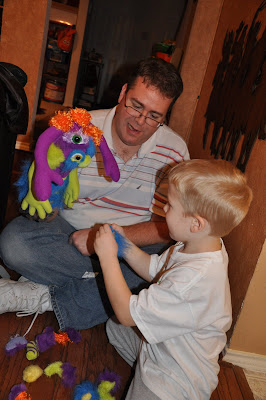 at November 05, 2008
Email ThisBlogThis!Share to TwitterShare to FacebookShare to Pinterest