Shopping with Two Children in Tow

I've been assuming that with two children I would have to leave all grocery shopping to Stuart or just go in the evenings when he is available to stay home and watch the two children. How in the world would I ever be able to keep two children happy and safe in a grocery store?! However, yesterday my urge to get out of the house took over and I took both children to Kroger with me for a quick shopping trip. Our pediatrian recommends keeping Rachel out of crowded areas for the first 6 weeks until her immune system is stronger but I knew this trip would be quick and I was going stir crazy from staying at home so much.

As I was driving to the store, it started to drizzle a little bit and it was already cold outside so I started praying for a parking spot close to the door. If stores have parking spots reserved for handicapped and for pregnant moms then surely they must have parking spots reserved for moms with two or more children. Maybe I've just never noticed them because I never needed one. Alas, no such reserved parking spot for me. This store happens to have some good parking spots right beside the door so you never even have to cross a parking lot. That would be ideal for a mom with two children in tow but unfortunately, none of the prime spots were available and I ended up parking way out on the end of a row. I struggled with getting the infant seat in the shopping cart but eventually we all made it safely into the store. Luckily for me, Kroger offers samples in their bakery so Nicholas stayed occupied for a while as he nibbled on something sweet. Yes, I'm sure it ruined his appetite for dinner but we all have to make sacrifices sometimes. Somehow we managed to get almost everything on the shopping list and both children made it home, safe and alive. Hooray for me!

I got so inspired by my successful outing with two children yesterday that today I thought I would up the ante a little. I took them both with me to get the car inspected. Yes, such a kid-friendly outing, I know. Nicholas got bored pretty quickly so in desperation I started digging through my purse for something to entertain him with. I had planned to be super mom and bring along his Leapster but somehow my dazed and tired brain forgot. I recently cleaned out my purse so there were slim pickings of things to play with. I pulled out some dollar bills and some change and we talked about money. Then we used the money to practice addition. I was surprised at what a hit the activity turned out to be. Of course, Rachel was great and slept through the whole outing.

Let's count again...one, two. Great, I've kept both children safe and alive after two outings together. Hooray for me again! Guess it isn't so bad taking two children out and about...at least while one of them still isn't able to run away from me.

We'll get to replay this particular outing sometime in the next 15 days since my poor car failed to pass the emissions test and I have to return in 15 days for a re-inspectioin. It was bound to happen. I've said a special little prayer before inspection time for the last several years and I just know each year it will fail. But it hasn't until this year. Fortunately, the inspector guy said it is some EGR valve and it sounds like Stuart can replace it pretty easily. One more "honey do" added to his list. Poor guy!

To reward Nicholas for his good behavior while waiting for the inspection, I took him to a new park behind the inspection place. I chased him around the playground as I pretended to be an alligator trying to eat him up. He loved it. 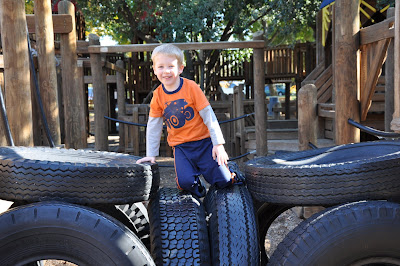 When it was time to go, Nicholas swung down off a step and ended up hitting a tooth on one of the bars on the playground. He cried a little but the tooth looks ok. However, after we got home he still complained a little about the tooth. I'll check on it again tonight and see how it's doing.
at November 12, 2008
Email ThisBlogThis!Share to TwitterShare to FacebookShare to Pinterest