When Nicholas was first born, he had light brown hair. However, several people commented that it had red highlights. I never really saw it. When I'd look closely at the individual strands of his hair they seemed brown but I think the pink of his scalp was reflecting as red highlights in his hair.

I explained this to one friend of mine in particular and she thought I was crazy for not seeing the red hair on my child. I have nothing against red hair. As a matter of fact, I love it. At one time, I even tried to have red highlights put in my hair (Stuart can tell you how successful that was!). What's odd is that the only person I can think of with red hair on either side of the family is Stuart's paternal grandmother.

Rachel was born with this same light brown hair that Nicholas had. Again, I don't see it as red hair. However, Mrs. Carrico looked at her this week and commented on her red hair. Yes, it does look a little red but again I think it's just reflecting her pink scalp. 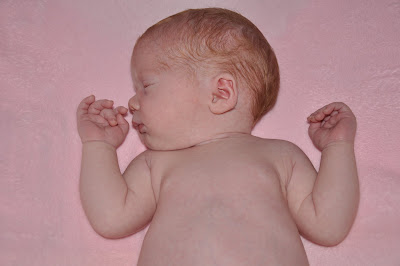 When Nicholas was a few months old, most of his brown hair fell out. He was a cute little bald guy. When the hair grew back, it was blonde. I wonder if this will happen with Rachel or will she remain a brunette (or a red-head as some call her)?

Also, Nicholas was born with light blue eyes like Stuart's and they have remained the same beautiful blue ever since. However, Rachel's eyes are a darker blue. I wonder if that means they'll eventually turn hazel like mine??

I put Rachel on my postage scale today and it says she weighs 9 pounds 3 ounces. She lost a lot of weight after birth but she seems to be gaining weight just fine now.

Rachel first lifted her head up when she was about a week old. Now she is quite good at lifting her head and shoulders up when she is on her tummy. A few days ago, I had her on her tummy to check out her head control. She decided that she didn't like being on her tummy and started crying. I didn't roll her over yet because I was still trying to see what she would do with her head. Of course she just got madder and madder. Next thing I know she has rolled over on to her back. Ok, 3 weeks seems too early to be rolling over. Surely I missed something. So back to the tummy she went and, boy was she mad by then. She cried and fussed and kicked then...rolled herself right back onto her back.

She's cute when she's mad. She crinkles up her little face and cries, "Geeeeeeee".

Nicholas is still madly in love with his little sister. I would have expected some signs of jealousy by now because she likes being held all the time but I'm really not seeing any. Mrs. Carrico says that she hasn't seen a prouder big brother than Nicholas. She says that he talks about Rachel all the time and always includes her in his prayers. We see that during prayer time at home too. Every day when I pick him up from school, he tries to let any friend that's nearby see "my baby", as he calls her. Today I overheard him whispering to Rachel, "I'll always love you. I'll always be with you."
at November 15, 2008
Email ThisBlogThis!Share to TwitterShare to FacebookShare to Pinterest