We went to Homeschool Day at Sandy Lake Amusement Park. I've heard of this park for years but we had just never been. There was a great discount on admission and rides for today only. It was a great way to visit and get unlimited use of all 19 amusement park rides, miniature golf, shetland ponies, and even paddle boats. 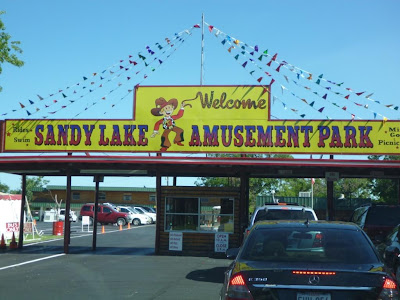 Rachel loved watching the peacocks. We had just recently read a wildlife magazine where I had shown her pictures of peacocks. She pointed this one out to me and said, "Look Mommy! It's the bird with the dots!" 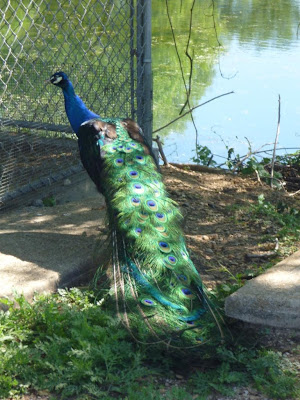 There were some special exhibits and vendors out at the park today including Robots 4 U who had some remote control robots for the kids to play with. 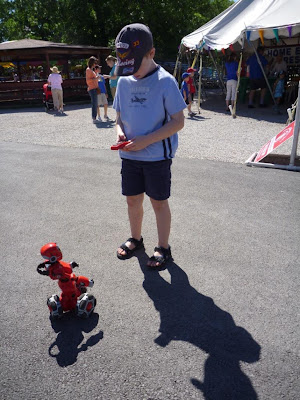 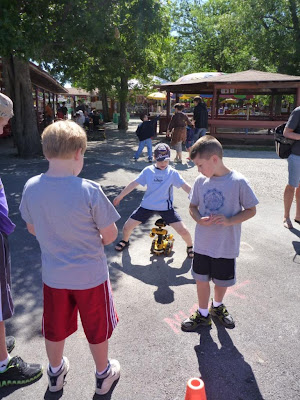 The first real ride we went on was called The Pretzel. Nicholas thought it was a haunted house and really wanted to go. We got there and realized it was a ride. I figured it was kind of like a fun house with silly stuff inside. The cars weren't in a train so that we could all go in together. They were separate and individual. I rode in a car with Rachel while the boys shared a car behind us. They sure look excited. 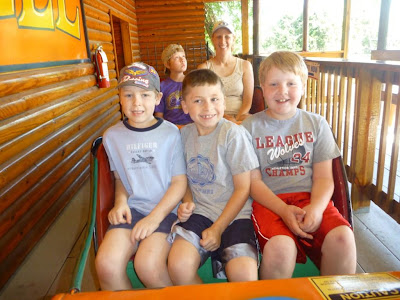 As soon as our car rode into the building I knew there would be some scared kids. The building was completely dark as in pitch black. The cars were riding on a bumpy old track and every now and then there was a puff of air blown on us or a scary sound. I wrapped my arm around Rachel and she was completely quiet for a while but then I could hear her whimpering some and then she said, "I don't like it. It's scary". I felt terrible that I hadn't checked into the ride at all before we got on it. Bad Mommy!

We were both so glad to get off the ride. The boys came out in about the same condition. Unfortunately this picture is very blurry but all three of them had their eyes closed and Nicholas had his fingers in his ears with his head tucked down. 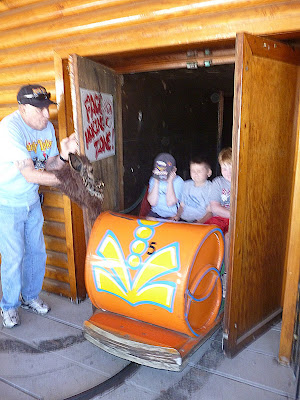 Whoo! The boys decided to ride something a little easier like the Rock O Plane. At first we watched what it did. Some of the cars seemed to spin completely around and turn upside down while others didn't spin much at all. Nicholas was a little worried because he specifically said that he didn't want to spin upside down. But we explained that you probably won't spin around if you don't rock the car. The boys felt better and hopped on. 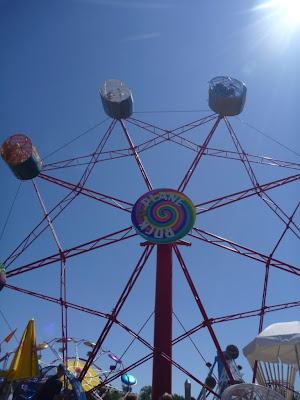 But as soon as the ride started, the boys car rocked and flipped upside down. It killed me to look up and see a look of panic on Nicholas' face. I couldn't figure out why the kept going upside down when we saw other cars that weren't. Eventually they stopped rolling over and I could see them smiling in the car. When Nicholas got off the ride, he said it was great once they stopped flipping over. He said that another boy had told them as they were getting on that if they pulled the bar a certain way that they wouldn't flip upside down. Turns out that pulling the bar that way was exactly what makes the car flip upside down. I hate that it happened that way but the boys ended up having a good time.

Rachel played it safe and chose the Merry Go Round. It was great having unlimited rides because we rode this one over and over and over. 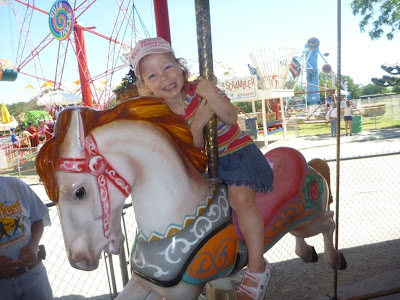 They boys tried out this boat ride but after what they had already been through this morning, there just wasn't enough action in it for them. 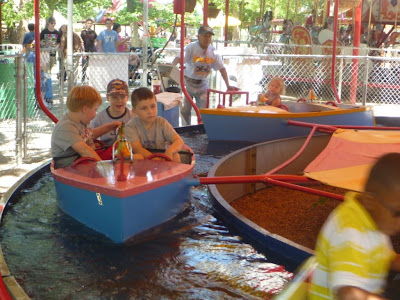 Rachel loved it though. This was the first ride that she rode on completely by herself. I was a little worried that she was do something crazy like lean over the edge of the boat or try to stand up and I wouldn't be able to stop her because I had to wait outside the fence. But she did fine. What a big girl! 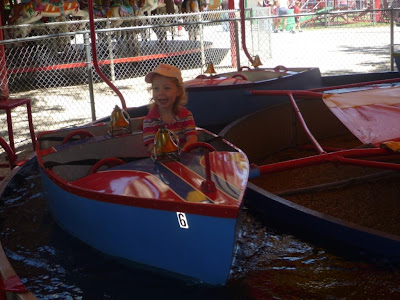 Next we all decided to try the Tilt-A-Whirl. It just spins around so it seemed like it wouldn't be rough. And Rachel was tall enough to ride it with an adult so surely it is a kid-friendly ride. Right? 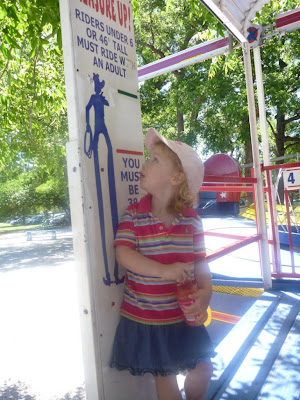 She was so excited to get on the ride. 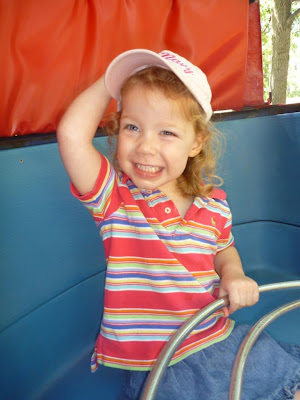 At first it was fine but then the force of the spins got really strong and even made my stomach turn a little. Needless to say, Rachel hunkered down in her seat and clung to my side as she squealed. Man, my judgment was really off today and my baby girl had to pay for it. The boys seemed to be straining a little too as they spun around. But we all survived and no one got sick! 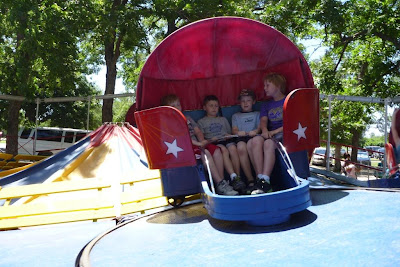 We took a break from the amusement rides for a while and checked out the paddle boats. Nicholas rode with our friends. 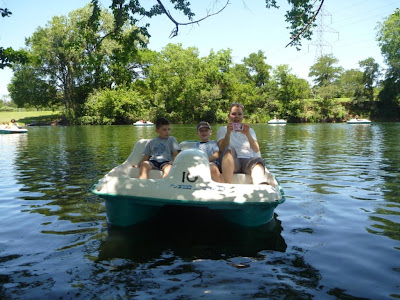 While I rode with Rachel. The boats were fun but it was a bit of work since I really didn't have any help with paddling. 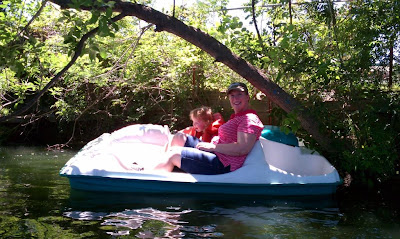 The miniature golf course was fun. Rachel got a little frustrated because she couldn't hit the ball the way she wanted to. I was a little worried because there were some older kids waiting for a turn on our putting green and I didn't want them to start complaining that we were taking too long. But I was reminded that we were with a homeschool crowd when Rachel whined, "I can't do it" and one of the older boys that had been waiting for a turn stepped up and told her, "Yes, you can do it. Just keep trying. You'll get it." It warmed my heart to see such character and compassion in a pre-teen boy. 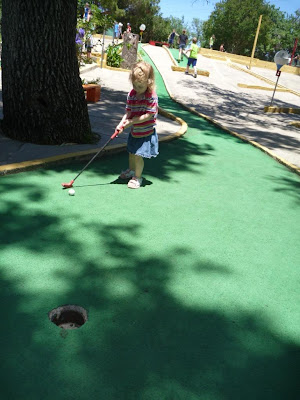 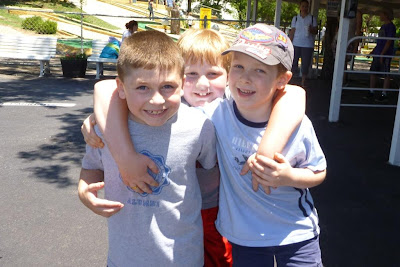 I'm so glad that Nicholas has such great friends that he enjoys spending time with. He has known these boys since he was about 2 years old and it's neat that all three of them are now homeschooling. 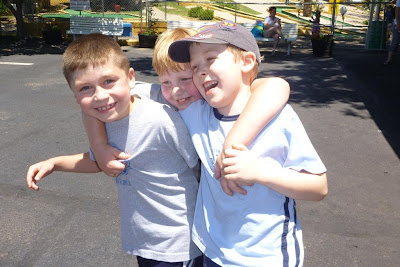 Rachel had a blast riding on the shetland ponies. She loves horses and ponies of any kind. She talked sweetly to hers and patted it several times as it rode her along. 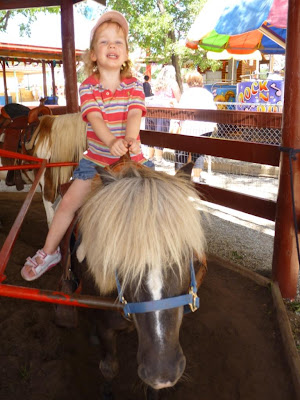 The boys rode on this space ride. It was really a "little kid" ride and they were a bit too big for it but that didn't stop them. They rode in separate cars and pretended to shoot at each other. These boys can have fun together no matter what they are doing. 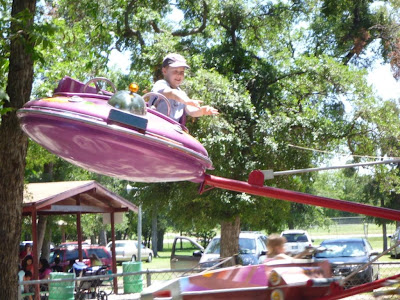