This year I used all books from Bob Jones University Press. It was easy to just go buy all subjects by the same publisher and have a consistent feel for how they are all laid out. However, I learned that when you do that you miss out on one of the big benefits of homeschooling and that is having the flexibility to tailor the curriculum to the learning styles and abilities of your particular child rather than some cookie cutter program that would work well with a classroom of 25 kids at all different ability levels.

I'm starting to shop now for next year's curriculum because as families finish up their school year, they will be selling off their materials now and I can get some great deals on used curriculum if I make my decisions early. I love shopping at a local store called Home Eductators Resource or "The HER store" as it is often referred to. They sell both new and used books and supplies for homeschooling. The staff were so helpful last fall when we decided on short notice to pull Nicholas from public school. As a matter of fact, they have helped me so much that they recognize me when I walk in the door! They have a little play area in the back that Nicholas and Rachel can play in while I sit on the floor with a big pile of Math books trying to pick out which one to choose for next year. They are just a few miles from our house so I stop by there often, sometimes just for some inspiration and new ideas. There is another great homeschool bookstore that sells new and used material. It's called The Book Cover but it's about 30 minutes away from me so we don't go there often (although they have a better play area for little kids which I really appreciate).

Nicholas has really enjoyed the Bob Jones Phonics program that we used this year. He has completed it and is a really great reader. They use phonics characters to help explain and retain phonics rules to help with reading. Here's an example...

Phonics Rule: A word with a long vowel than ends in a silent "e" will drop the ending "e" when you add "er" or "ing" to the end of the word.

With Bob Jones phonics characters: Miss Long is riding in the car with her cute but silent dog, Marker E. Then when the scary looking Bad Cat "er" or Bad Cat "ing" wants to join them, Marker E gets scared and runs away.

In an example: I put the word card down for "hope". Nicholas would move the Miss Long character cut-out to above the long "o" on the word card and then move the cute dog character Marker E above the silent "e". Then we make funny hissing cat sounds as the scary looking Bad Cat "ing" comes to meet them and we make silly Marker E yelping sounds and he runs off in fear of the scary cat. It's a fun and simple way to remember how to spell and pronounce the change from "hope" to "hoping". Of course there is a whole different scenario for changing the similiar word, "hop" to "hopping" but since that is a short vowel word, you would use the other phonics characters - Mr. and Mrs. Short, Uncle Short and still have those rascally Bat Cats.

Unfortunately, Phonics is done and Nicholas will move into English/Grammar/Composition for next year. Even though they don't have the fun phonics characters anymore, we will still use Bob Jones for this. I really struggled with deciding between Bob Jones English and Saxon English and even bought a copy of each book so I could take them home and compare them side by side with Stuart. We felt that the Bob Jones curriculum has a more rounded program that will cover English, Grammar, and Composition well. I'm hoping that this will help improve his composition skills. Actually, Nicholas has good story composition skills but I think he just hates to write so he comes up with great stories when he's just storytelling but they get really short and simple if he knows he is going to have to write it down. If the Bob Jones English program backfires and it's just too much of a struggle with all the writing then we'll switch over to Saxon which seems to be really focused on learning parts of speech with just a little bit of composition. Yes, another benefit to homeschooling is that if something doesn't end up working as well as you thought it would then there are many more choices out there to help you find the perfect fit.

I felt that the Bob Jones Math, Science, and Reading curriculums weren't as strong as Nicholas needed. So I'm keeping this in mind when considering curriculum choices for him next year.

Next year, we will try Singapore Math. It's taught in a little different format than U.S. schools typically use but it is also considered to be a little more accelerated which I think Nicholas needs.

For Science, Nicholas will probably continue with the weekly homeschool lab class at Circle of Sciences (COS) in Lewisville which he did this year. They will be covering the Bob Jones 3rd grade science curriculum which I could certainly do at home but COS is really great with providing interactive labs and experiments as well as giving the kids hands-on experience with their vast collection of live animals. Nicholas just loves going each week because he knows he will learn about, touch, or feed some new animal that day. We will continue to do some science experiments at home but mostly just because that's what we like to do. I think COS

I'm still undecided about which curriculm we will use for Reading. This will need to include both learning larger words but also focus on comprehension of what has just been read. There are so many great choices out there and he is already strong in this area.

I also want to integrate a Bible curriculum into Nicholas' studies. He already does Bible verse memorization for church and we could certainly do a better job in that area. However, I'm looking for something with short daily lessons just to get him to dig a litle deeper into his Bible. Bob Jones has a good Bible curriculum but I haven't looked at what else is out there.

I think I need to just get a big cup of Starbucks and plop down on the floor at the HER store for an hour or so to see what I think will stick the best with the boy.

For History this year, we used the Bob Jones Heritage Studies which for first grade covers basic American History from the Indians through Columbus and the basic colonies. It was good and had a lot of hands-on, interactive activities. I really wouldn't mind continuing with Bob Jones Heritage Studies for next year. However, I've heard so many wonderful things about another curriculum called Story of the World that I think we're going to give it a try. There are four volumes covering Ancient History through Modern Times. There is also an activity book that has experiential projects and crafts and there are also recommendations for other books that we can get on our own that all work together to bring the subject matter to life. One volume plus activities can take two years to complete if you do everything provided. This would make it an 8 year program bringing him up into high school. Or some people take a different approach and cover each volume in one year but they hand-pick certain activities and don't do everything so that they can complete the four volumes in four years. But then at that time they start back over with Volume I and expand on different activities so that the child gets some review as well as learning some new pieces of history. I'm not sure which approach we'll take yet but either way we can't go wrong.

At first I was a little concerned about going into Ancient History with a 7 year old. It seemed a little too 'heavy' to be covering Ancient Egypt and Rome at this age. However, I picked up a few used books that I found on Ancient Egypt and Rome that I thought we might use along with Story of the World next year and boy, was Nicholas excited. I put the books down on the kitchen table and he jumped into his seat to look at them. 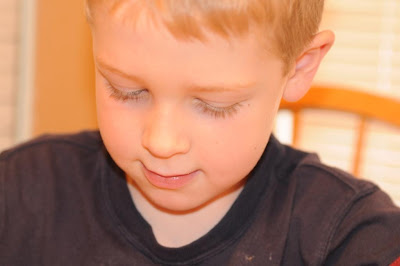 Ooooo! Look at that! 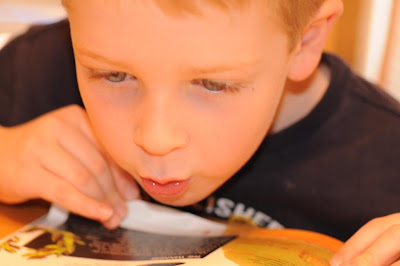 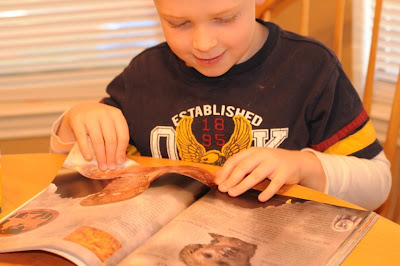 I thought it was great that he wanted to flip through the books and he genuinely seemed excited. It was time to put Rachel down for her nap so I left Nicholas at the kitchen table. Rachel didn't want to go to sleep yet so I was up there with her for a while trying to get her settled down to bed. I had actually forgotten what Nicholas was doing and assumed that he was in his room building with Legos. But when I wandered downstairs again about an hour later, I was so pleased to see him still sitting at the kitchen table totally engrossed in reading his new Ancient History books! 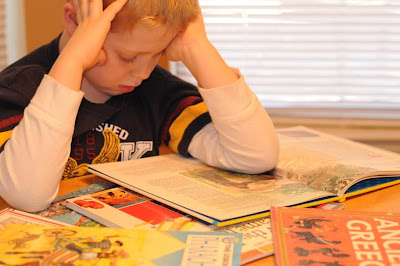 I'm so excited to start these new curriculums next year. This year has been good but it had a rocky start as we were both trying to learn the ropes of homeschooling but next year is going to be great.

I've just got to mention one more thing...When I came back downstairs, Nicholas showed me things in sevearl of the books and told me about what he had learned about them. Then he showed me this picture... 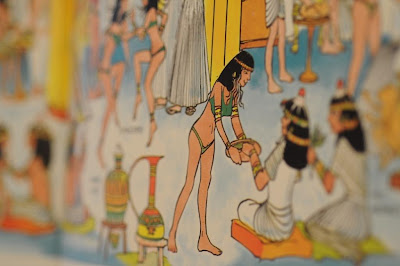 He kind of mumbled about it but said something about the way this lady was dressed. He thought it was different but he didn't seem to say it in a negative way. It was more as if she was "interesting". Hmmm....
at May 23, 2011
Email ThisBlogThis!Share to TwitterShare to FacebookShare to Pinterest