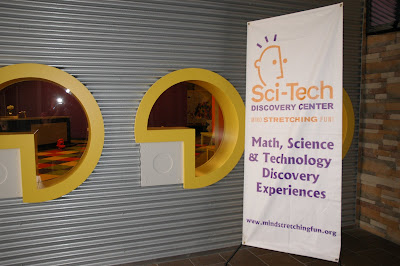 It's located in Frisco near 121 and the Dallas North Tollway. It's mostly just open areas of interactive hands-on exhibits for kids to learn about math, physics, geometry, chemistry, and technology all while having fun! 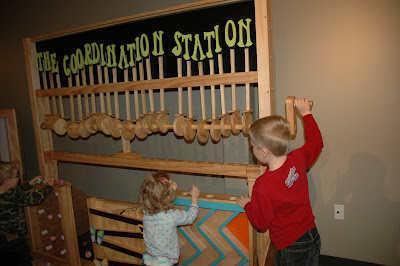 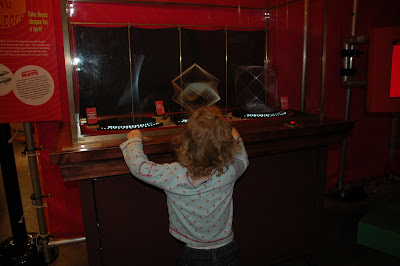 When she pressed the button in front of each one of them, it would stop spinning and she could see that the object really didn't look much like the shape she had been looking at as it spun. 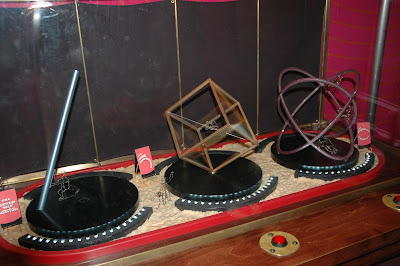 She also had fun playing with the video camera and taking pictures of herself. 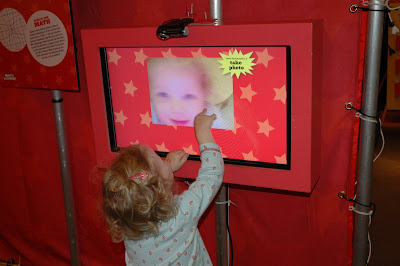 And what toddler doesn't love looking at themselves in a mirror, especially ones that contort the way you actually look. 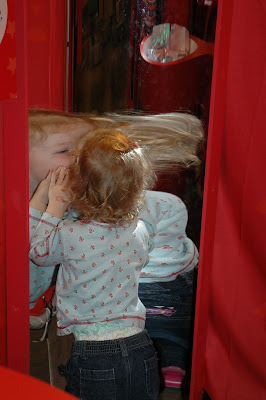 Nicholas and Rachel both kept going back to the table with the Keva planks. 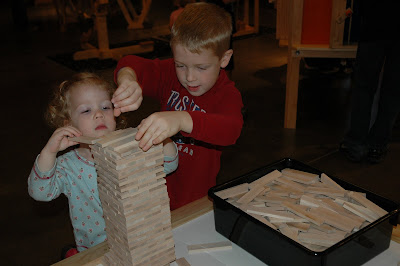 What a simple idea. They are just little pieces of wood about 1/4 inch thick, 3/4 inch wide and 4 1/2 inches long. Every piece is the same. You build structures by simply stacking the planks. No glue, no connectors. They can be stacked upright which looks like it would be unstable as a house of cards, but even this type of structure is surprisingly stable. 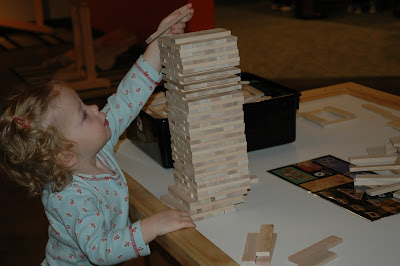 Of course, the tricycles with square wheels were a cool thing to try. Notice how Nicholas is using his tongue to help him steer! 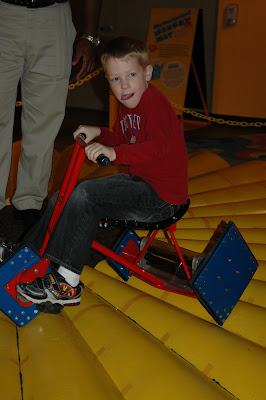 I think Nicholas spent the most time in this quiet corner with the Piet Hein inspired (think Tetris shapes) giant soft blocks. He built them up, climbed on them, and then rebuilt another design...over and over and over. 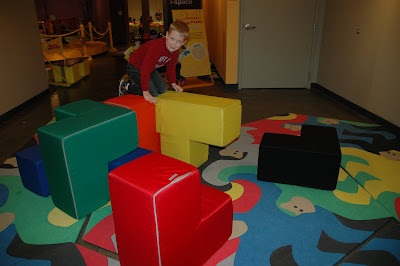 We learned about a Harmonograph which uses pendulums to create a geometric image. Nicholas enjoyed learning about the mechanics and geometry of it. 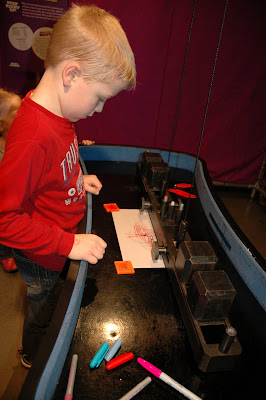 Rachel may not have gotten as much out of the talk that Nicholas did but she was very interested and seemed to have a good time listening to the lady doing the presentation.

Nicholas loves Tangrams and plays with them often at home. So when Rachel found this fun set of easy Tangram patterns, she knew exactly what to do. These are made by Lakeshore Learning and I just might have to buy a set of these for Rachel to work on at the table while Nicholas and I are working on his school work. 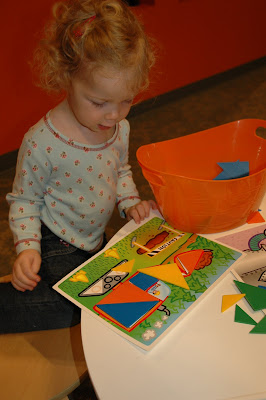 The kids participated in an experiment where they drew their names and a picture on a coffee filter and then put drops of water on the ink. They watched as the water pulled some of the color out of the drawing as it made the ink run. But they also got to see that the water attracted some colors more than others. Nicholas saw this because he used green to make a rocket ship on his filter but after it got wet, the water pulled blue out of the green ink. 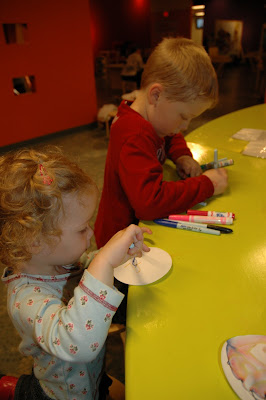 Nicholas had a lot of fun with this puzzle. He loves playing with these big measuring wheels but for this he was supposed to complete the maze without making any left turns. Tricky! 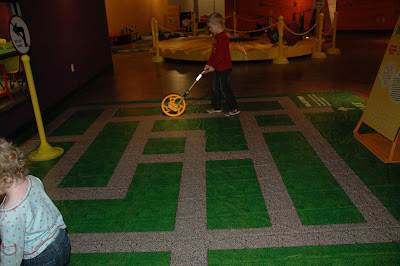 In addition to the independent learning that we did for most of the time, there was also a brief assembly in which we got to learn about liquid nitrogen and watch several experiments. 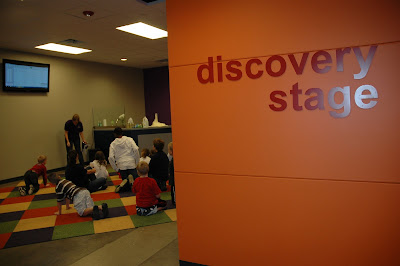 Both kids had fun with this experiment. You use the computer screen to make adjustments to the track then you race a car down it and try to get the fastest time. Rachel didn't care so much about the timed event. But she did enjoy copying everything big brother had done and then watching her car go zooming down the track. 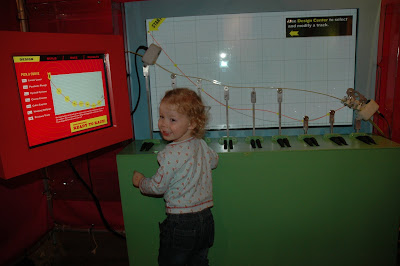 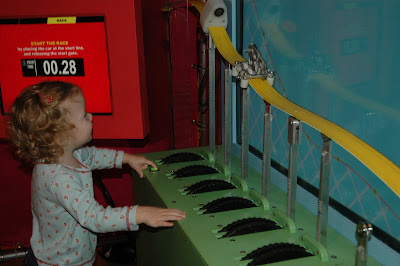 There were lots of simple hands-on activities that the kids loved that could easily be made at home. Such as several tracks for balls to roll down... 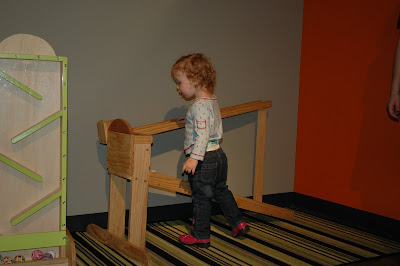 ...Marbles rolling around in a case that has bicycle bells attached to the bottom (noise and movement are always big hits for my kids!)... 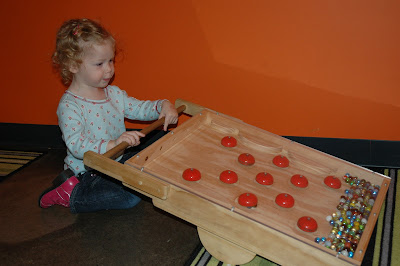 There were lots of magnetic toys. My kids really love playing with magnets. 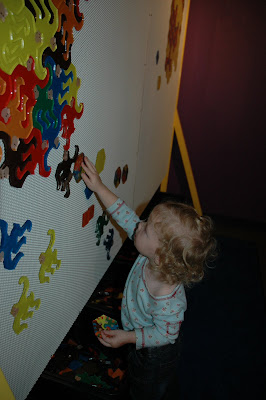 Rachel liked playing with these puppets that you control by pressing 4 piano-type keys in front of it. 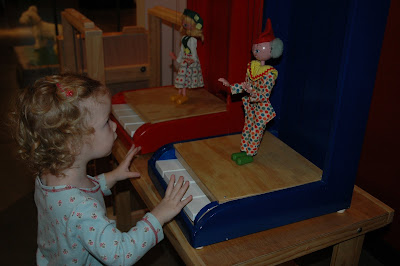 I liked the activities that involved some using coordination like this one where you have to keep both platforms moving up at the same time in order to keep from losing the ball. Nicholas particularly liked the buzzer on it.

We spent several hours playing and learning on our trip to Sci-Tech. We will definitely be back!