My child is falling apart! Two teeth in 4 days!

Today we were at the playground having a picnic. Nicholas took a bite of his sandwich and I noticed that he made a funny face. He reached into his mouth and then tossed something on the ground. The next thing I know he's shouting, "I lost another tooth! I just threw my tooth on the ground!" He had thought it was just something hard in his sandwich so he tossed it out! 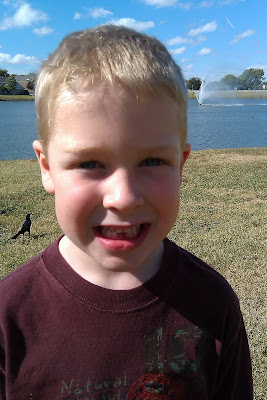 We laughed as we searched the ground and finally found his little bitty tooth.

What's really exciting is how the permanent tooth is already well on its way in BEHIND the tooth he lost today. I guess it has been coming in for a while but was so out of line with the rest of his teeth that it had to come pretty far out before it nudged the baby tooth out of its way. Can you say BRACES? 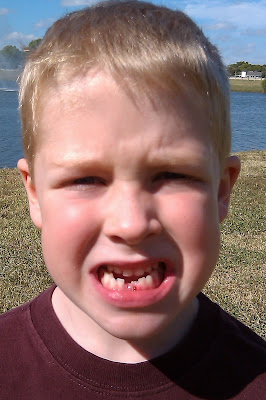 The Tooth Fairy came for a visit last night. She left a dollar (I bet this gets expensive for her over time!) and she kindly left another trail of Fairy Dust (I had just finished cleaning up the Fairy Dust mess she left on her last visit here a few days ago). However, Nicholas was quick to realize that the Tooth Fairy forgot to take his tooth!

Yes, the Tooth Fairy is overworked and underpaid just like the rest of us so occasionally she makes an error. Maybe she wouldn't make forgetful mistakes like this if she wasn't up doing her work at 2:00 in the morning?! But what can you do? She's the Tooth Fairy!

Nicholas is leaving his tooth under his pillow again tonight in hopes that she will come back for the tooth that she forgot and leave him another dollar bill.

HA! That's funny!
at November 10, 2010
Email ThisBlogThis!Share to TwitterShare to FacebookShare to Pinterest