I love Freecycle. It's an email list where people can post stuff they want to get rid of and other people can take it off their hands for free. Free stuff gets passed around to others who can use it and none of it ends up taking up space in a landfill. What a great idea!

This afternoon I picked up this great little pink push car for Rachel from a nice lady down the street who posted it on Freecycle. We probably wouldn't have spent the money to buy her something like this since she will soon be inheriting Nicholas' tricycle which has a push bar for the child to be pushed around before they can pedal. But this little push car is really perfect for her right now and will make for a nice transistion into the tricycle later. Rachel had her first ride in it today when we picked Nicholas up from school. 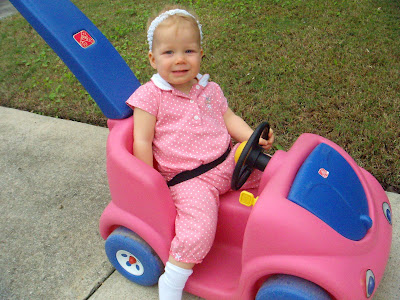 Nicholas had fun pushing Rachel down the street. 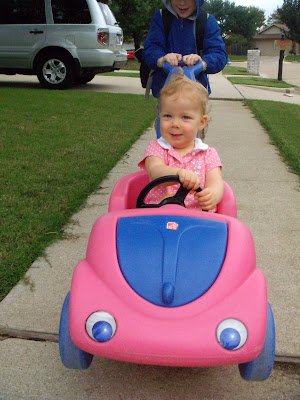 Rachel is just learning how to walk so we don't bother with shoes for her because we want her to feel what her feet and toes are doing when she stands. However, she also likes to let her feet drop off of the push car as we are going down the road. Each time I saw her do this I would stop the car and put her feet back on the foot rest. But apparently it happened more than I realized. When we got home today from picking Nicholas up at school, I noticed that there was a hole in her sock and her little foot was bleeding! 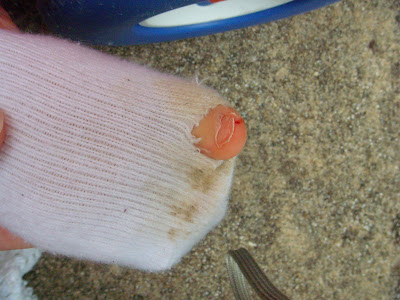 She never seemed bothered by it and was laughing the whole trip to school and back. I feel terrible about her toe but I know I stopped and picked her feet back up a squillion times during the trip so I don't understand how it happened. Fortunately we have some like-new pink and white tennis shoes (also acquired from Freecycle) so now she will have to wear those anytime she rides in the push car.
at October 28, 2009
Email ThisBlogThis!Share to TwitterShare to FacebookShare to Pinterest