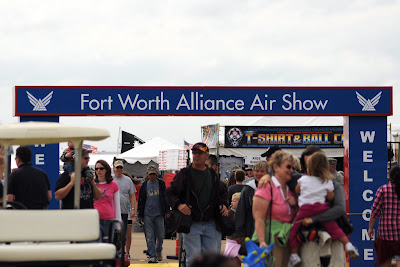 Since my Dad and Stuart have both flown planes and since Nicholas loves anything that flies, I knew we had to go to the Fort Worth Alliance Air Show.

There were lots of booths and vendors and many parked planes, jets, and helicopters to look at and climb on. We saw a B-52 Stratofortress. The tire is bigger than Nicholas! 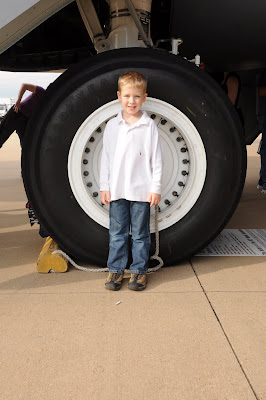 We even got to walk through the bomb compartment at the bottom of the plane. Wow! 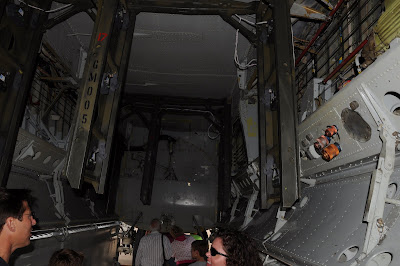 Nicholas got to check out an Army transport helicopter. 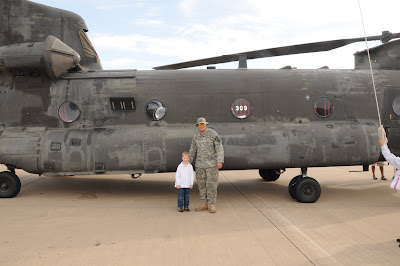 And there were lots of other cool helicopters and planes to check out... 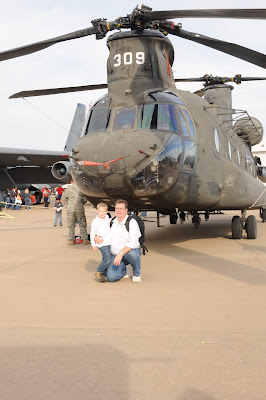 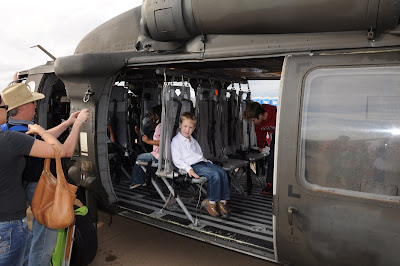 Of course, a boy must play and Hide and Seek is always a good game. Where could Nicholas be? 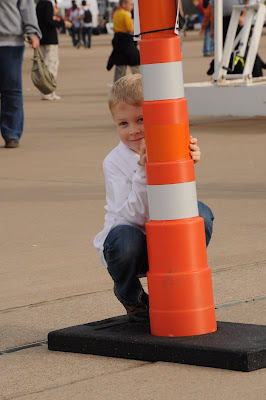 The air show was great but the loud noises startled Rachel so I held her the whole time while trying to keep her ears covered. Look at that sad little face! 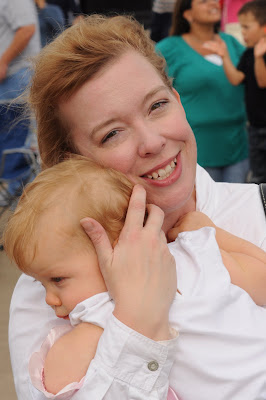 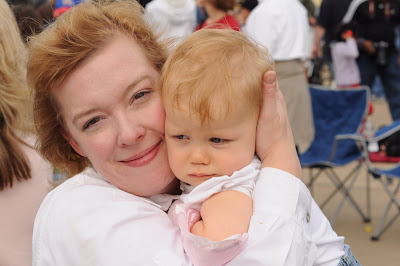 Nicholas covered his ears a lot but loved the whole thing. I kept hearing, "Wow!" and "Look at that!" and "Oh, here they come again!" 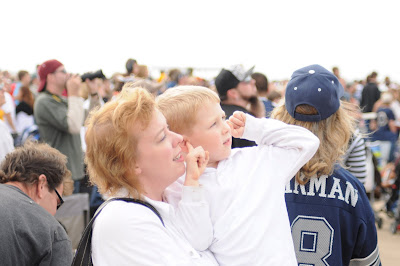 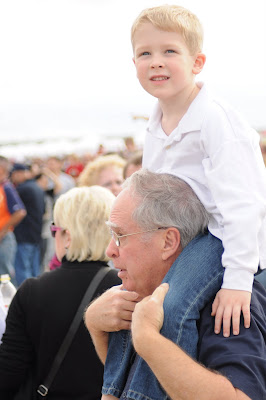 The most exciting part of the air show was getting the priviledge to watch the Blue Angels perform. 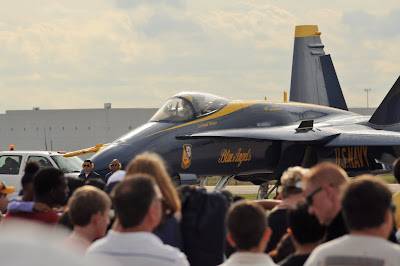 The Blue Angels are a part of the U.S. Navy. Their team was created after World War II to try to gain the public's interest in the Navy and aviation in general. They performed their first flight demonstration in June 1946 at their headquarters in Jacksonville, Florida. I was surprised to learn that the first team Blue Angels team coined their name "Blue Angels" because they liked the name of a bar in New York where they were performing in 1946. It seems like that name deserves a better story than that :)

The Blue Angels currently fly in Boeing F/A 18 Hornets. There were 6 performing together at this show. It was gray and cloudy and the Blue Angels were zipping by quickly but my husband got some amazing pictures of the demonstration. 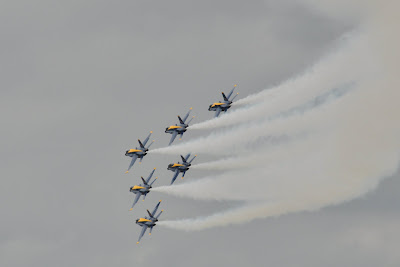 Look how tightly they fly together. My Dad explained that the commander of the team leads the way and all of the other pilots don't look ahead but instead they look at an adjacent plane to determine their position. 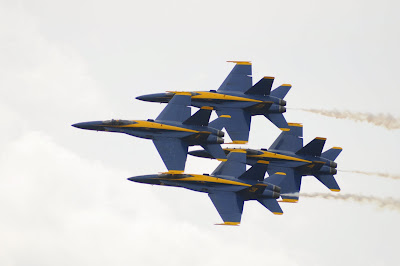 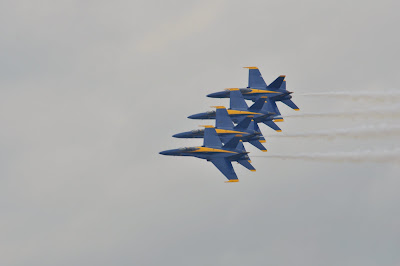 I'm just in awe of their skill but fearful just looking at how close the wing tips are to each other. It's so incredibly dangerous. Do their mothers know that they do this? I don't think I could let my child do this no matter how old they were. 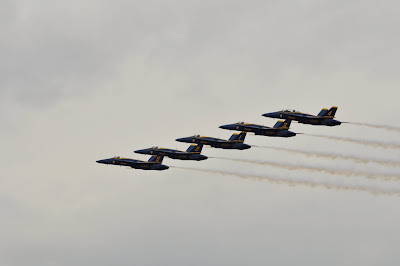 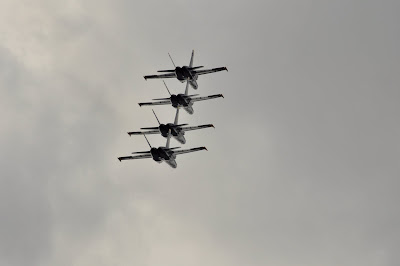 Here are two Angels flying on their sides as they zoom past each other. They were going so fast that they had to be positioned perfectly from the beginning because there would be no time to correct their alignment once they realized someone was out of place. 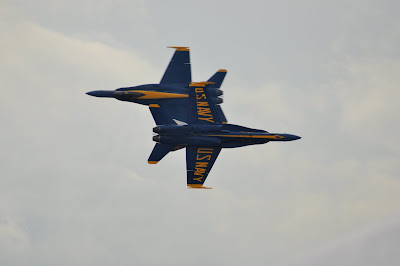 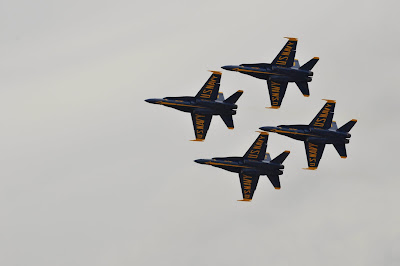 These two planes did an incredible trick. They swooped down in the air and it looks like they crash together but obviously they don't. I still cringe just looking at these pictures. That's just too close for comfort! 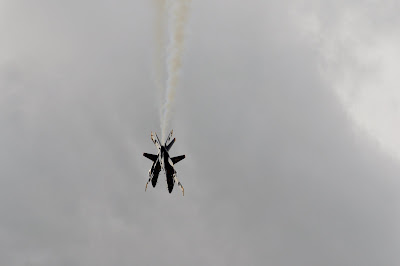 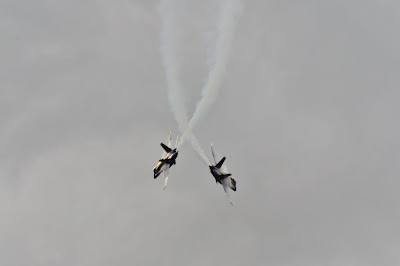 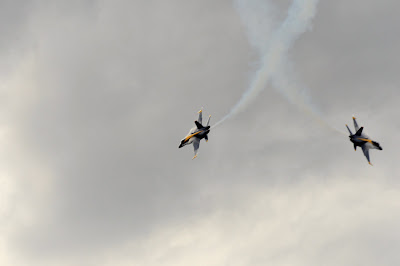 Of course, the Blue Angels are just beautiful to watch. They are truly masterful pilots and the best of the best. 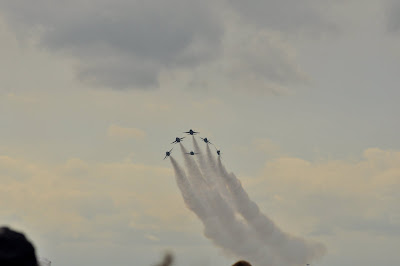 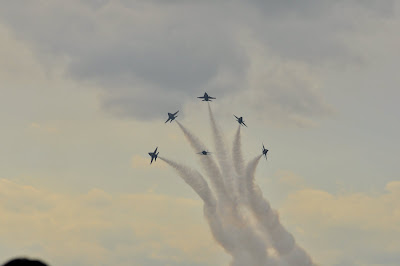 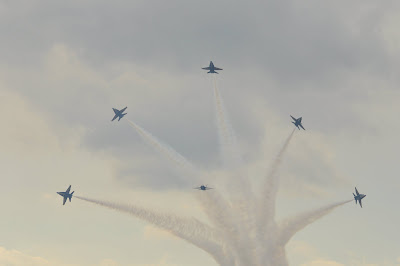 at October 25, 2009
Email ThisBlogThis!Share to TwitterShare to FacebookShare to Pinterest