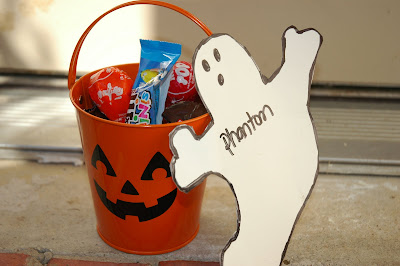 We got "spooked" by someone in the neighborhood. One night this week, the doorbell rang but when Stuart looked out of the peep hole, no one was there. He opened the door to find a little tin of candy, a note, and a cute little paper phantom. The note said that we had been spooked. It said that we had to hang the little phantom outside our door and then spook two other people in the neighborhood that didn't already have a phantom outside their door. What fun! The next day we easily found out who had spooked us because the boy that we walk to school with just couldn't contain his excitment about what he had done.

Nicholas decided the first person he wanted to spook was our neighbor. We got a little gift basket of candy, made another phantom, and copied the note. Nicholas was so excited he could barely stand it. But when it came to going up to the door and ringing the bell, he wanted me to come with him. 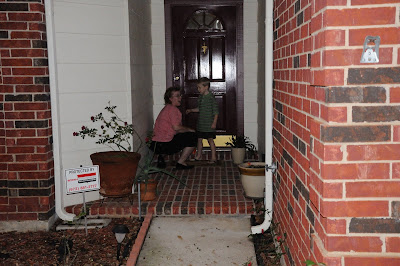 We rang the door bell and then ran to the side of our neighbor's house so we could hear when they found their surprise. 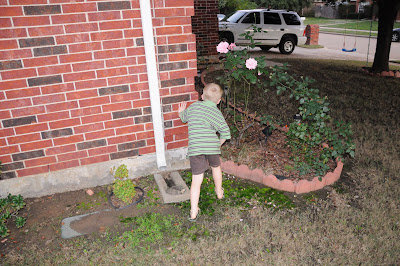 Nicholas didn't want to stay hidden though. He told us that he was going to just walk over to the door and pretend like he didn't know what had happened. So he walked over to them, completely non-chalant about the whole thing and seemed curious about what they had. They were laughing and asked if he had spooked them. He did an awesome job of pretending that he had no idea what they were talking about and he denied having anything to do with it....note to self, the boy fibs a little too well...Eventually he decided to spill the beans and tell them that he had been the one to spook them. So much for a leaving them with a lingering mystery...
at October 16, 2009
Email ThisBlogThis!Share to TwitterShare to FacebookShare to Pinterest