When Nicholas was little, we spent a lot of time with his friend Katie. Katie had a Little Tikes Garden Activity Center toy. It's just a little plastic structure that has a door and some little toys to play with, a mail box with removeable mail, and a garden with vegetables you can actually harvest. I thought it was cute but had not considered getting it for Nicholas because it was expensive and I didn't think he would play with it enough to get our money's worth.

However, every time we went to Katie's house, this was his favorite toy. The two of them would play in it most of the time. After seeing how much he loved it, I re-considered buying one for him but it still seemed too expensive since he would probably be growing out of it soon. So I never got one for him.

I recently saw this same Little Tikes Garden Activity Center for sale on craigslist. It was used but in great condition with all of the toys and parts in place. This time I wanted to get it for Rachel to play with. Since it was used I got it for a great price. Little did I know that Nicholas would spend more time in it than Rachel! At 5 years old, he still loves this thing! Here he is putting a carrot through the mail box...so many ways to have fun with it :) 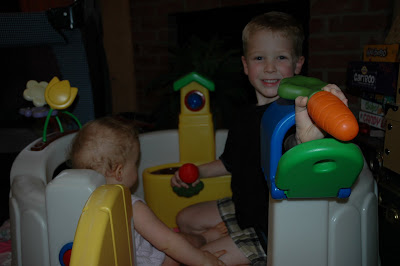 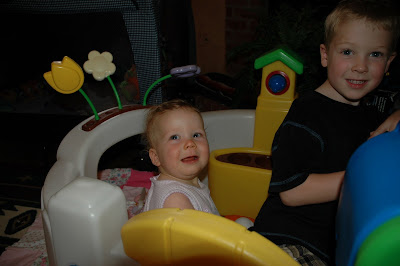 If Rachel crawls into it, Nicholas gets all excited that she is in their "club house" and he runs over and gets inside it with her. It is not a large structure. It's not really intended for a 5 year old to play in. But somehow, just barely, Nicholas can squeeze into it with Rachel. He loves to show her how to play with the toys, harvest the fruit, and collect the mail from the mailbox.
at August 02, 2009
Email ThisBlogThis!Share to TwitterShare to FacebookShare to Pinterest