We love to go to the dollar movies during the summer. Great movies and great prices! Today there was a showing of "Star Wars: The Clone Wars" for just a dollar. Nicholas loves anything Star Wars so I knew we had to go see it. But Rachel isn't so content to just sit still in a movie anymore. She has discovered mobility and she likes it! So there is no way I would be able to sit through a movie with her right now without her fussing to get down and crawl around on the dirty floor. Not to mention her teething pain and fussiness that follows would not be conducive to enjoying a movie with my little man. With only a few more weeks of summer before he starts kindergarten, I really wanted to have at least one special outing with him, just the two of us so I knew that childcare would be in order for the baby girl.

We got the girl taken care of and headed to the movie. $2.00 to get in. Awesome! We both wanted popcorn - it's a movie, you HAVE to have popcorn. And the popcorn will make us thirsty so we HAD to have drinks. Then Nicholas decided that he also wanted one of the giant pickles. He told the man behind the counter how much he loves pickles. Then he told the man how much he loves to drink pickle juice. Yes, ewww! The man behind the counter did not help to curb my son's icky interest in drinking pickle juice. No, instead he encouraged it by telling my son how he himself loves pickle juice too and has even poured it into ice cube trays and put sticks in it to make pickle popsicles. Thank you, man behind the counter. We paid the man $13.00 for our bounty. and found some great seats right in the middle. 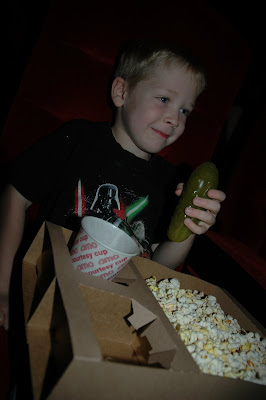 I felt a little lost having only one child to keep up with and oftentimes I felt like I had misplaced my own appendage somewhere. But then I would recall the scenario and relax for just a bit, quietly enjoying the fact that no one wanted anything from me for the moment. Ahh, peace! I didn't care for the movie but I enjoyed spending some quality time with Nicholas. He got excited at various parts in the show and had to comment on it to me. I just love spending time with him and I'm going to miss times like this when he starts kindergarten in a few weeks.

After the movie, I called to check on Rachel. She was doing fine and napping at the moment so Nicholas and I extended our little date to include lunch. We spent about $7.00 on a quick lunch. Nicholas enjoyed playing with the juke box there. 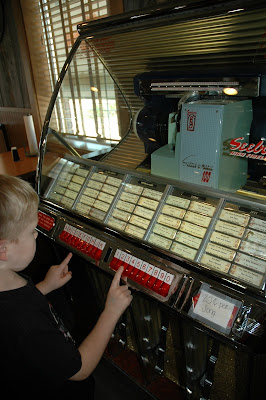 So far I had spent $2.00 on the movie, $13.00 on snacks, $7.00 on lunch. Yes, it started out as a $1.00 movie and the other expenses weren't too bad to add to it. But then I had to fork over money for childcare. Ouch! $27.00! So now my $1.00 movie outing ended up costing $49.00!!! Hmmm, it was fun and it was worth it for an almost-end-of-summer-gotta-see-Star-Wars-movie-mother-and-son-date but from now on Rachel tags along with us, fussy squirmy baby or not! Oh, how I envy friends who have that free grandparent childcare option...
at August 05, 2009
Email ThisBlogThis!Share to TwitterShare to FacebookShare to Pinterest