David Chicken and the Spray Park

I've heard about a children's performed called David Chicken for several years now. I've always wanted to take Nicholas but something always came up and we never got to see him. Today he had a free performance at North Park mall in Dallas. Stuart was in Fort Worth all day photographing a horse show so I loaded up Nicholas and Rachel and we headed to Dallas. 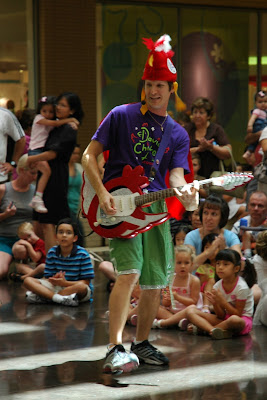 It was a cute show but I'm sure I would have been much more impressed if it had been one of his real shows in an auditorium with better audio equipment and acoustics because it was difficult to understand what he said at times with all of the background noise of the mall around us. Rachel seemed to laugh at times but she probably laughed more at the kid dancing next to her than at David Chicken. And Nicholas is kind of at an awkward age. He still gets into children's shows at times yet he is also very aware of "baby things" and he can't show that he's enjoying something that might be for little kids.

HOWEVER, I did catch him doing the chicken dance at one point! 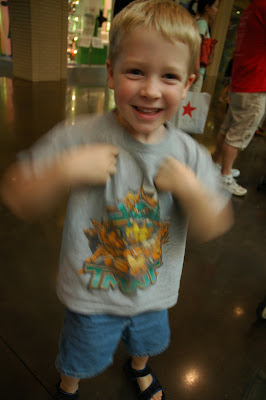 But then I guess he felt he had to redeem his "cool big kidness" but scaling this piece of architectural art near the show. The boy does love to climb! 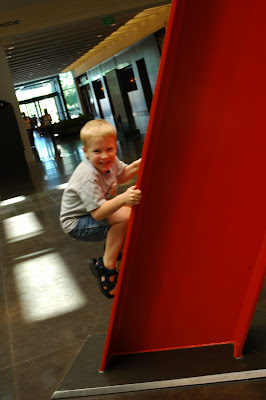 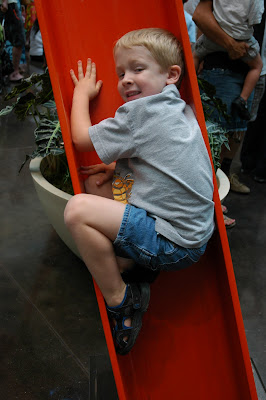 So it was a bit of a drive for a show that was really wasn't age appropriate for either of my children - too young for Nicholas and too old for Rachel. I was bummed. And what better way to deal with that bummed feeling? A trip to The Sweet Factory. This is one of those very eye-appealing, wallet draining candy stores where everything is bulk and you pay what felt like $10/pound for a bunch of sugar. We didn't get a lot of candy but the price is all based on weight so I was a bit shocked at the register. Wow, we could have all gotten lunch for that price! 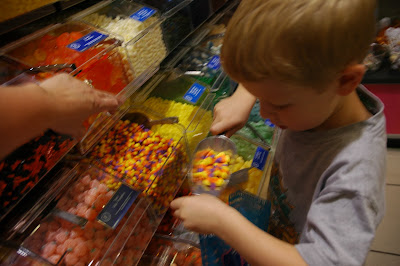 Nicholas had lots of fun with the scoopers and we did find some unusual treats. Check out this GIANT gummy snake! 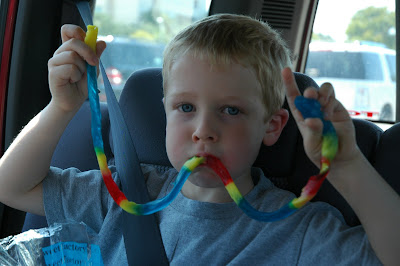 We don't live far from Dallas or Fort Worth but it's far enough that I try not to go there for just one thing. I like to make a full outing of it and find at least two things to do on the trip. So I thought I was so smart to have planned ahead and mapped out a nearby spray park that we could visit, Lake Highlands Spray Park at the Lake Highlands North Recreation Center on White Rock Trail. Nicholas loves these parks where water shoots out of the ground and buckets dump water down on your head. I had his swimsuit and towel all packed for him and was going to surprise him when I got there. But second bummer of the day - all the sprays were turned off - BONE DRY. Wow, I'm 0 for 2! Well, at least there was a regular playground that Nicholas was quite happy to play on and meet some new friends. 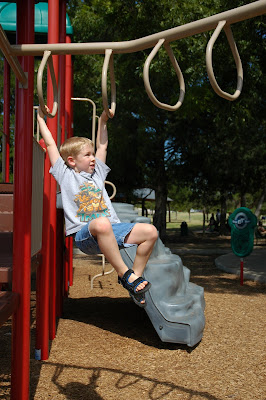 Rachel and I enjoyed sitting in the shade under a tree while she ate a snack. It was really kind of nice because we were right next to a school where a marching band was practicing. I had a great time listening to the music and Rachel loved me bouncing her on my lap to the rhythm.

Nicholas was excited to see a man walk through with an ice cream cart. He got a giant popsicle and happily shared it with Rachel. Rachel didn't seem to care for it too much. I think really cold things are still too novel for her. 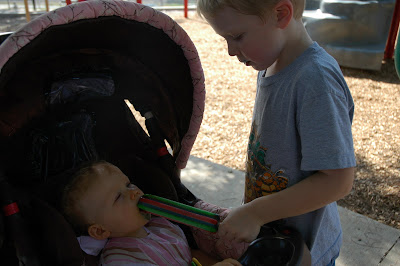 But Nicholas made a full drippy mess of himself as he finished off the popsicle. 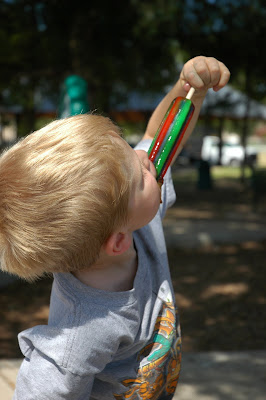 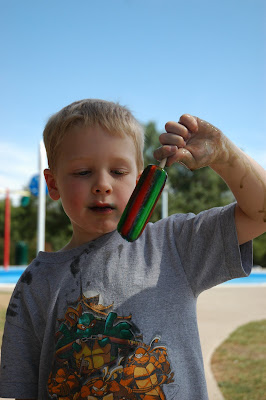 I'm not familiar with this area at all but the street we were on was White Rock Trail so I assumed we must be near White Rock Lake. You can't always assume things like that though. We drove around a bit but never found the lake. We were all a bit pooped by then and Rachel was getting fussy so we headed home. The day wasn't as exciting as I had planned. But we did have a good time and we did some new things. And it kept Rachel occupied enough that she didn't get terribly fussy about her mouth pain.
at August 29, 2009
Email ThisBlogThis!Share to TwitterShare to FacebookShare to Pinterest