August 19, 2009
My friend and I planned a wonderful excursion to Dallas today. We took the kids to see the Walt Disney Christmas Carol Train Tour. It's touted as a "Once In A Lifetime Attraction"...and it's totally free. Hey, Christmas in August? We can handle that! It would be fun to think of snow in 100 degree temperatures. Of course we had to go!

Nicholas, Rachel, and I piled into the car and headed to Dallas to meet our friends there. We got there a little early and visited with a police officer on a cool T3 electric vehicle. The T3 goes twice as fast, recharges in half the time, goes twice as far on a charge and has a higher payload than the Segway. 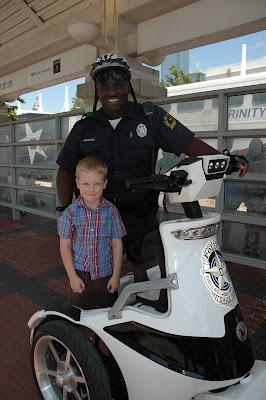 Nicholas was just hanging out near this column with the Christmas Carol ad on it when suddenly it started shooting snow out of the top! Ok, it wasn't real snow and it didn't do a thing to cool us off but it was still pretty neat. 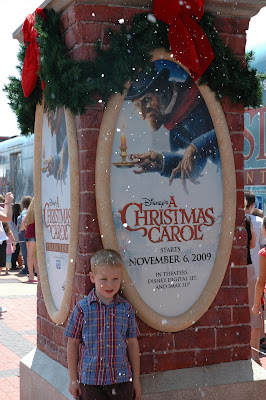 Our friends were almost there so we started checking out the train. We walked up to where the end of the line was but didn't want to get in line until we connected with our friends. From where we were the line didn't seem too bad. Although most of it was in the direct sun, it seemed like the line was just a couple of train cars long, right up to those white tents past the little white building. 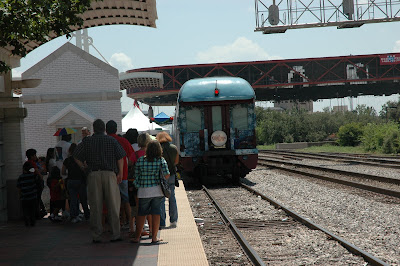 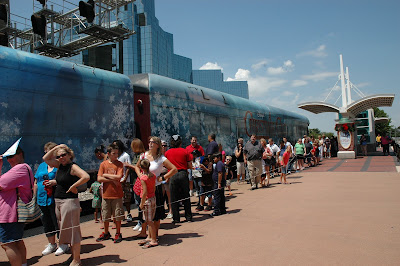 WRONG! Once you wait in that 30 minute line, you are not at the head of the line. Nope! Here is what you see when you get to the white tents.... 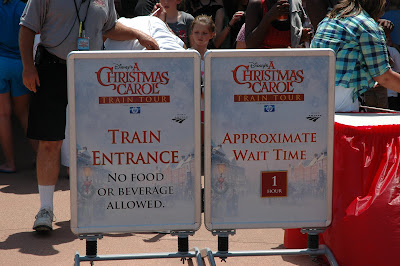 I actually spoke with one of the attendants about the wait, hoping she might convince me that it really wasn't an hour long wait from that point and we should give it a try. Nope. She said it was really more like an hour and a half wait! And I later learned that this wasn't bad. When the train was in Houston, it had a 5 hour wait. Hmm, standing in the heat for an hour and a half, with two young children...and I couldn't bring the stroller past that point so I would have to hold Rachel the whole time during this hour and half wait. That's ludicrous. I can hold her for about 15 minutes but by then she is usually crawling over my shoulder trying to launch herself to the nearest thing that looks more entertaining that me. There is no way I could hold her for that long without both of us having a meltdown.

We decided that we weren't going to get on the train with all of it's cool hands-on interactive activities that sounded so cool. So we walked over to the nearby parking lot where there were a few other tents set up and a big theater where I think they were showing clips from the movie. The tents had a few tatoos and stickers but pretty dull overall. There wasn't a line for the theater so I be-bopped over there to find out more about it. Can you believe that we were not allowed in the theater because you must first board the train with the 2 hour wait and then get a ticket before you can go in the theater. What?! I clarified with the attendant... 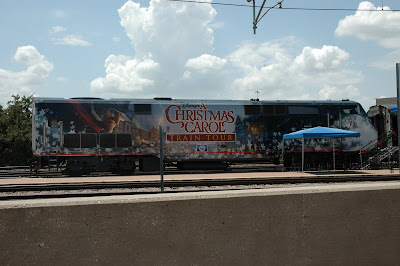 The kids were doing great although I know they were bored, hot, and frustrated. Can you tell they were getting a little loopy? 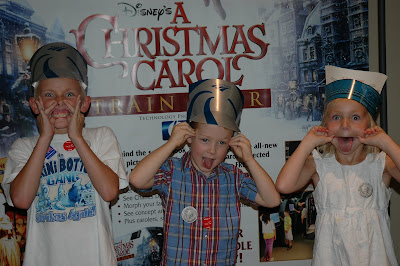 We were close to Reunion tower so we decided we walk over there and take the kids to the top of the tower to get a birds-eye view of Dallas. We were all wiped out so drinks and snacks at the vending machines were in order before we walked any further. So back on track, we trudge over to the tower. I couldn't help but laugh when I saw the sign... 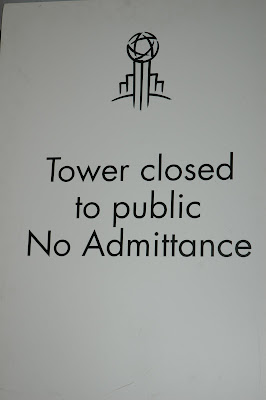 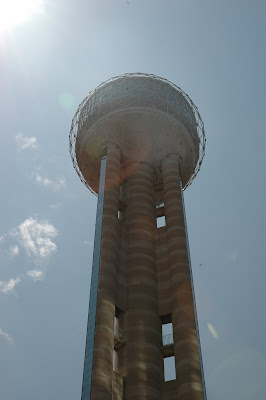 Great! We both had a long drive to get here. Neither of us is very familiar with the area. It is late in the afternoon and the sun has totally beaten down on us. We have 5 kids with us, two that want to be held most of the time, all of them wandering when the fun stuff is going to start. We need to come up with something or the native will really be getting restless. We decided to drive a little way and take the kids on a trolley ride up and down McKinney street. 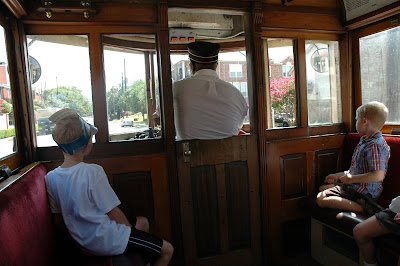 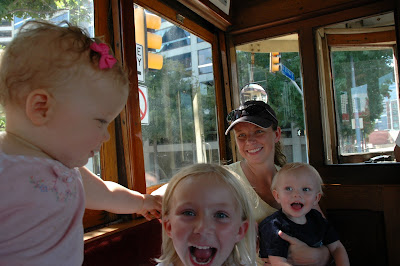 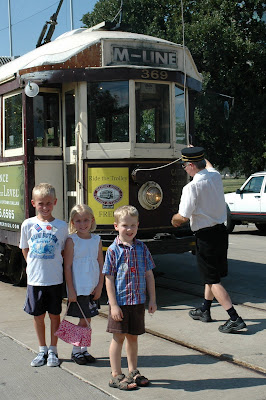 It was a long hot day that didn't go as planned. I won't even get into the major drama we went through before we finally got home that night. But I was impressed that the kids did so well. They were disappointed along the way but they were having fun just being together and in the end I think they all had a great time.