I was going to make sushi as part of our study on Japan. Keep in mind that not all sushi contains raw fish!

Our grocery store actually has a sushi bar where you can watch them prepare fresh sushi each day and I knew I could get some Nori (seaweed) there for making my own. But when we got there we decided it would be so much easier to just buy the sushi already made and just let the kids try it. So I took the lazy way out and we brought our sushi home from Kroger.

We did find these really awesome chopsticks for the kids though. They are plastic so they are durable and reusable. They have this cute little rubbery guy that attaches to the ends of the sticks to help hold them together. It makes using chopsticks so much easier for little kids. 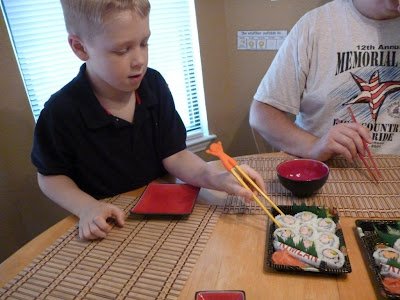 I was proud of how adventurous the kids were. They were ready to just jump right in and try it. 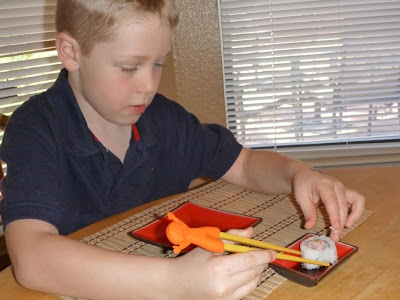 Nicholas thought it was really weird at first but still he finished it and even had a second one! 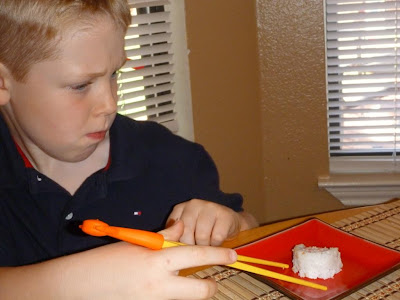 Even Rachel gave it a try. 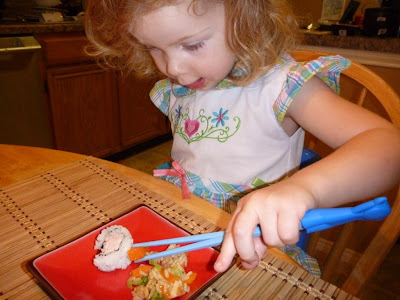 After dinner, Nicholas spent some time in his room and came back out with this incredibly creative Lego Sushi! 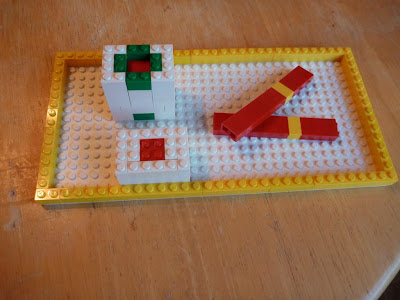 I love how he takes something he's learned about and reflects it back in his own way. It shows that he 1) paid attention 2) enjoyed what he learned enough to keep thinking about it after he has left the table and 3) that he is able to take ownership of the concept and make it his own. I love that teaching him at home allows him the freedom to continue his learning on his own in this way!
at August 25, 2011
Email ThisBlogThis!Share to TwitterShare to FacebookShare to Pinterest
Labels: at home, family, food, homeschool, Konos