Ft. Worth Museum of Science and History

We spent many hours at the Fort Worth Museum of Science and History this week. We love having a family membership here because we can just "drop" in for a little while anytime we are in Fort Worth and we don't have to feel like we have to stay all day just because we paid so much for the tickets. We come here quite often because of the membership and we usually end up staying quite a while.

I'm not sure what this Indy car had to do with any of the exhibits in the museum but Nicholas loved it. It's a 1979 Maclaren M24 Indy Car. 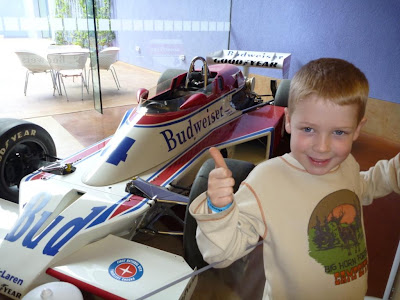 One of the special exhibits was all the different kinds of traits that make people who they are. We played with measuring our arm span and height in a giant mirror. Did you know that there is a relationship between arm span and height? Well there is!

We learned about personality traits.

I thought this picture was so appropriate for Nicholas. 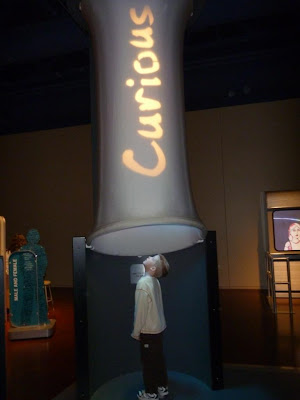 I personally liked this station the most because it taught about genetics. There are several flaps that have a picture of a man and woman on the top of the flap. You are supposed to move the individual cards of children's faces to match up two children with each couple using only facial features and their DNA scans. It was fun and Nicholas really got interested in it and wouldn't leave until he had finished. 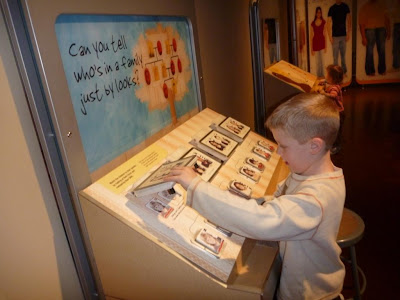 Rachel really liked the station where you could move around different facial features on different faces. We spent a while here just exploring all of the different combinations. 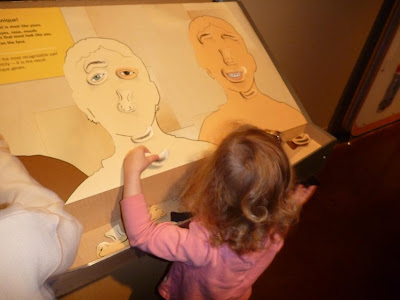 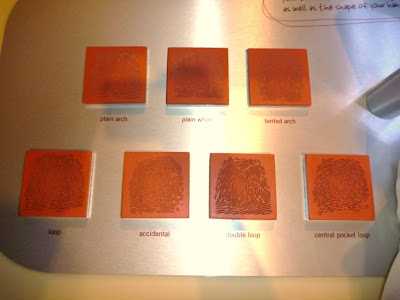 Both kids loved working at this station. Poor Riley has a lot of work to do. As you turn the handle faster and faster, Riley gets more work piled on his desk and as a result, he get more stressed. Nicholas loved making Riley's face turn red until he flipped out. We learn how some people are more likely to get stressed while others are better able to stay calm under fire. 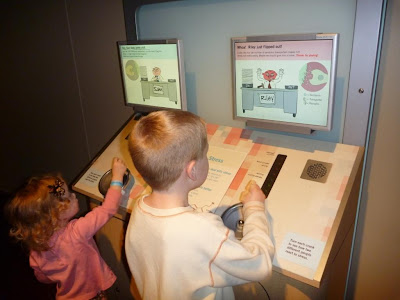 We headed downstairs for some more fun. The elevator ride with the glass wall is always a big hit for my kiddos! 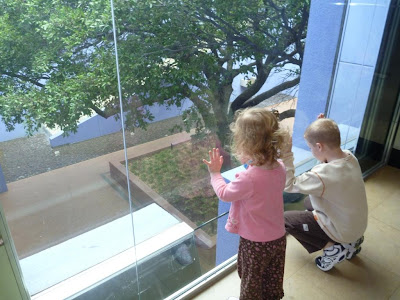 Downstairs we spent a lot of time in Innovation Studios which has hands-on, interactive, and engaging activities for kids.

Nicholas studied an ant under a microscope. I tried to show it to Rachel but seemed to be a little frightened of it. 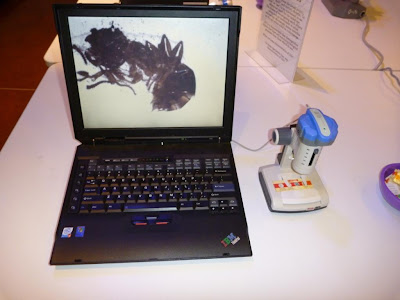 We built structures and tested them to see how well they would spin when a force of wind was applied to them. 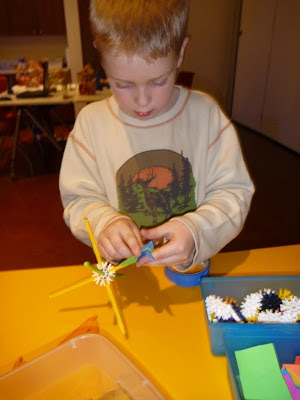 The kids made their own fingerprints and we studied the types of prints they have. 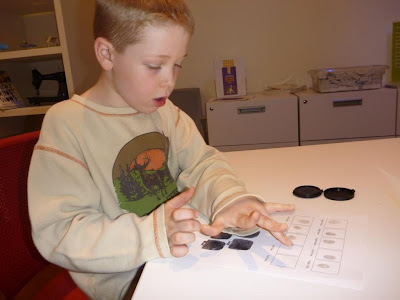 Nicholas used a set of dinosaurs and a camera to make a stop-motion video. Roar! 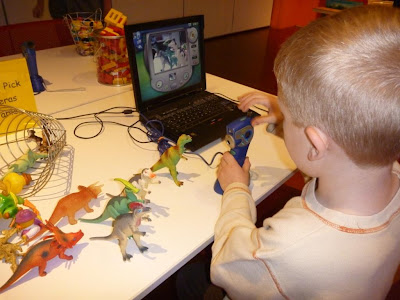 Rachel had fun just playing with the dinosaurs. 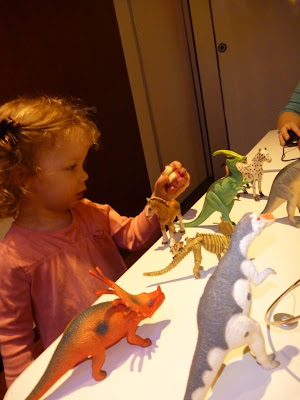 It's so much fun to take the kids to this museum. There are so many exciting things to see and do and it is all interactive which is great for kids. I love seeing their eyes get big as they point to something new and exciting they have found. 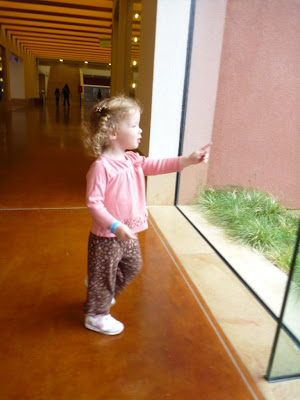 We spent some time in the children's museum area. Of course, we had to spend some time at the bubble wall. It's so mesmerizing. 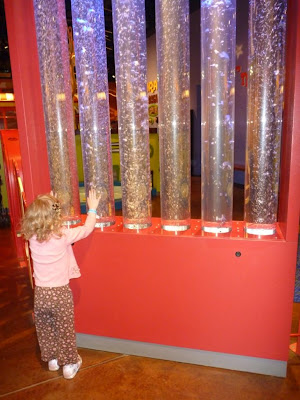 Rachel spent a lot of time in the hospital play area where she was a bit overwhelmed at all the babies she had to tend to in the nursery. 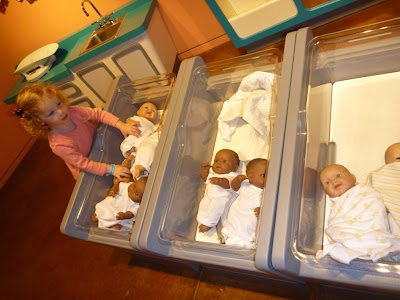 But she lovingly weighed and fed them....and then was later seen dragging one around by its foot. 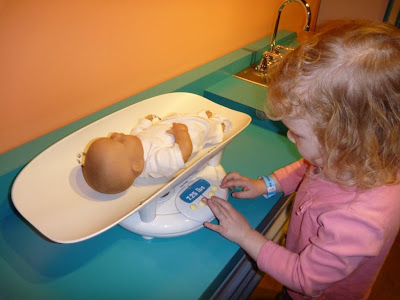 Rachel giggled once she found the magical spot to stand to make the giraffe talk to her! 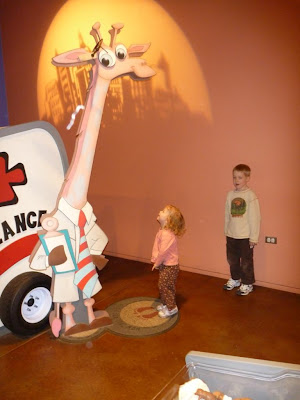 Trains, construction, even a full play grocery store. There is just so much for kids to see and do here. But that's not all. My kids especially love playing with all of the water activities in the courtyard by the children's museum...because they are obsessed with water and they love to get wet...especially when I don't have a change of clothes for them!

Case in point, water is coming up out of a pipe and Nicholas places his finger over the flow so that it shoots out in all directions. See Dad...this is why I needed a waterproof camera! 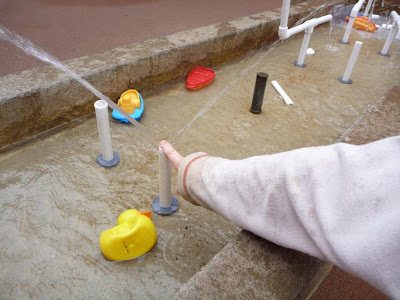 We always have to play with the water guns. They have a powerful spray that you have to aim at some propellers to try to make them spin just from the force of the water. 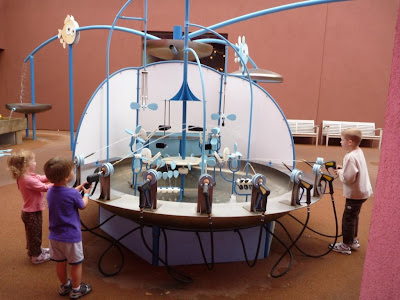 Last time we came, Rachel didn't quite understand what to do so it was fun seeing her actually 'get' it this time. She did really well with aiming her water spray! 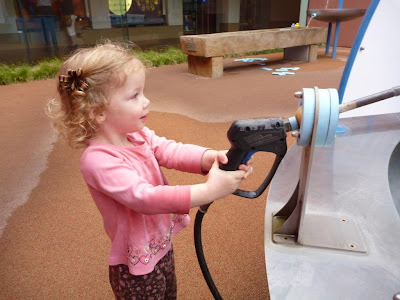 Of course, Nicholas took it all very seriously and tried to keep all of the propellers spinning at one time. 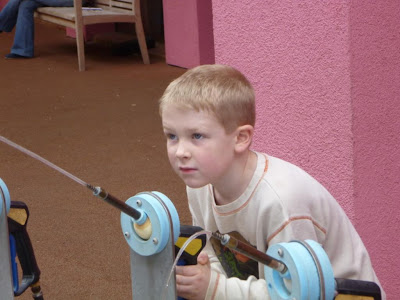 We made our way back over to the table with pipes of flowing water. The kids just loved it. There are several pipes that have water flowing out of them and then there are also lots of different pipe pieces (straight, 90 degrees angles, etc) that you can attach to the water pipes to change the direction of the flow of water. Of course, Rachel didn't always plan ahead well and occasionally directed the flow of water right onto herself. 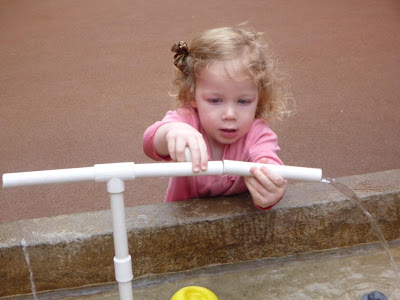 But she didn't mind. As a matter of fact, she seemed quite proud to be soaking wet! 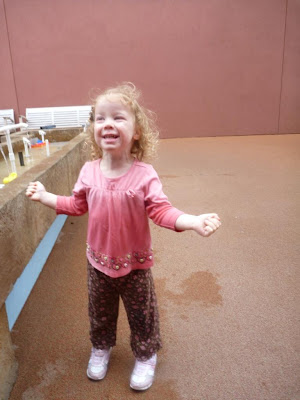 We had so much fun! And it was especially nice to be able to go during the week because we had a lot of the place all to ourselves!

The Fort Worth Museum of Science and History is located at 1600 Gendy Street in Fort Worth. They are open daily from 10:00 - 5:00. Prices are $14 for adults and $10 for children. There are also other special exhibits and features such as an IMAX theater and the Noble Planetarium that cost a little extra. For more information, please call 817-255-9300 or visit the Fort Worth Museum's website.
at April 22, 2011
Email ThisBlogThis!Share to TwitterShare to FacebookShare to Pinterest