The U.S.S. Lexington, or "Blue Ghost" as it is sometimes called, is a WWII aircraft carrier that served the U.S. Navy from 1943 to 1991. It served longer and set more records than any carrier in U.S. Naval history and today it continues to serve as a museum and a tribute to the men and women who served in the Armed Forces, especially in WW II. 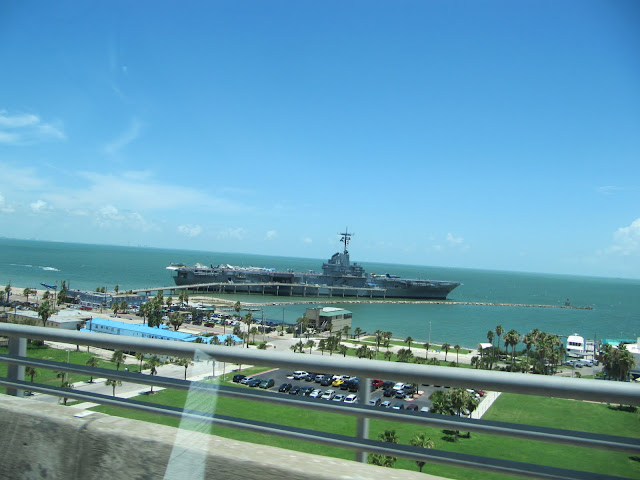 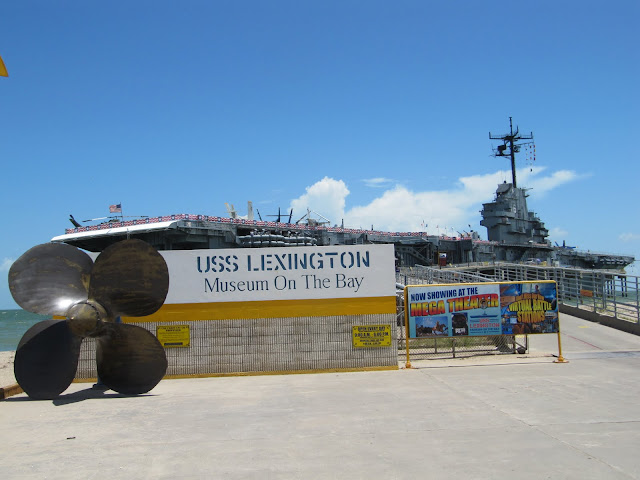 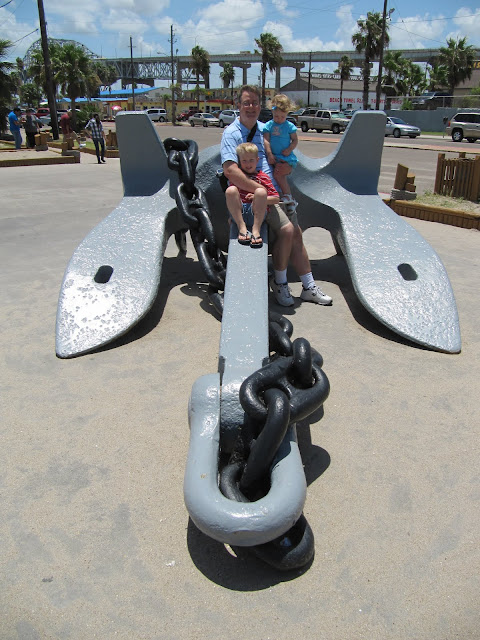 You first come aboard on the hanger deck. There are several bodies of planes that kids can play in. These were quite popular with the kids because you can really turn dials, steer, and push buttons and not have to listen to "don't touch that!". It made for cute pictures too. 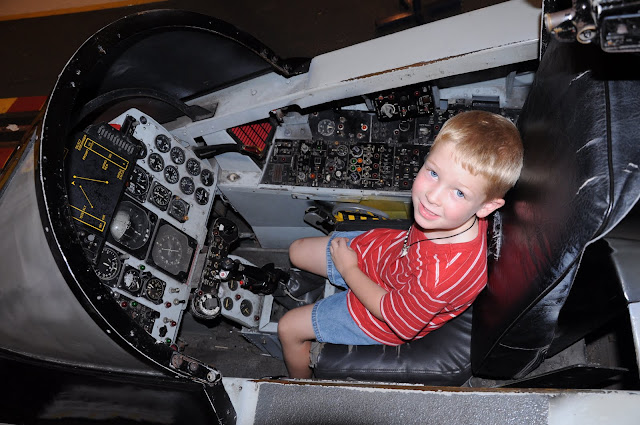 To your battle stations, men! 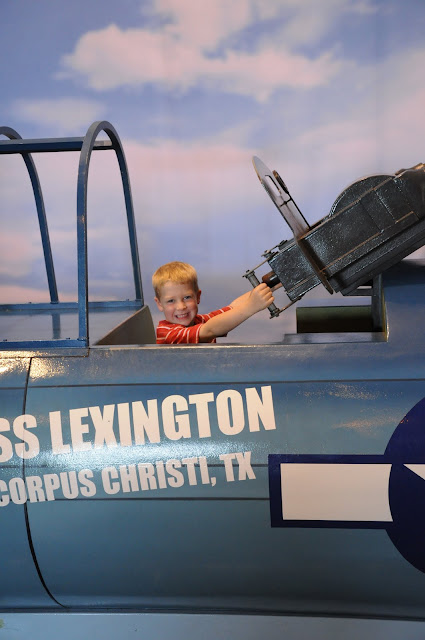 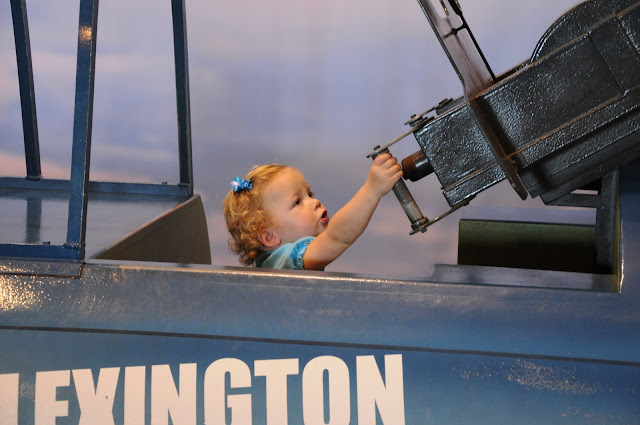 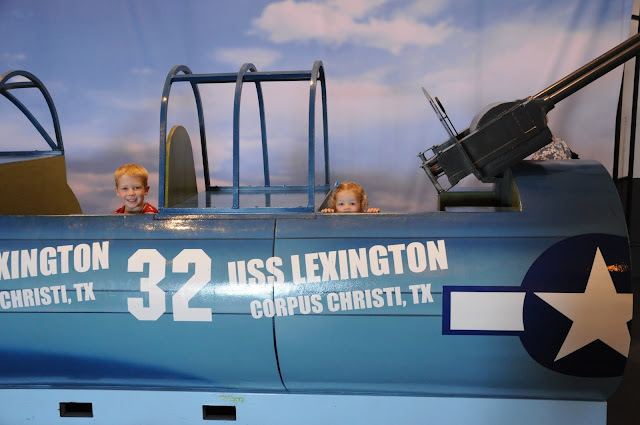 There is also a flight simulator that Nicholas enjoyed. You feel like you are really on a flight because the ride simulates motions of accelerating, decelerating, sharp turns, and dives and is synchronized with a film that you watch while "flying". 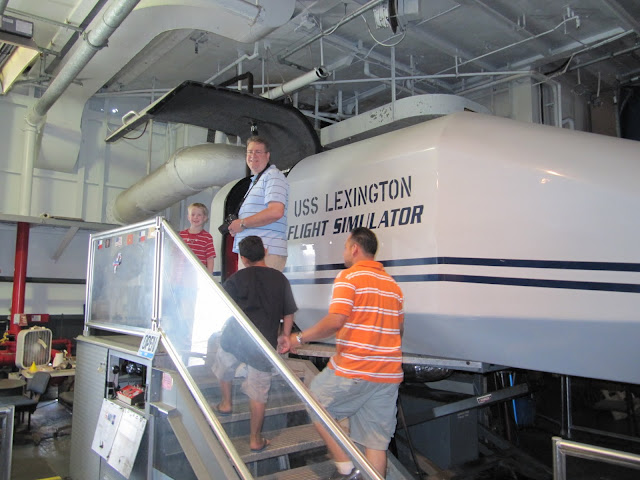 There are five, self-guided tour routes covering 100,000 square feet and eleven decks. You can really spend all day here exploring the flight deck, checking out the living quarters, artillery, engine rooms, etc. It was a real ship with tight space restraints so be prepared to go up and down lots of steep ladders, through tight spaces, and low ceilings. Nicholas loved this and Rachel had fun too but I was worried about having a toddler loose onboard and worried about her on the ladders, but she did fine. We had more traveling today so we knew we wouldn't get to see all of the tours. We wanted to be sure to see the cool aircraft onboard so we focused our tour on the flight deck. 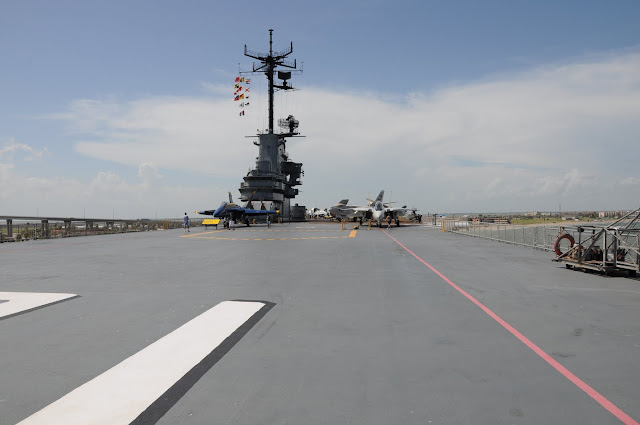 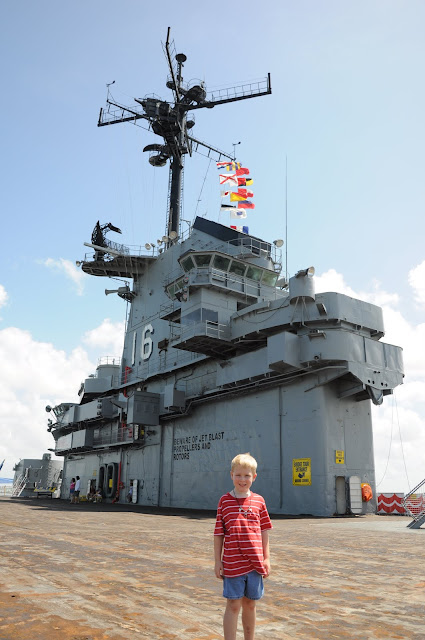 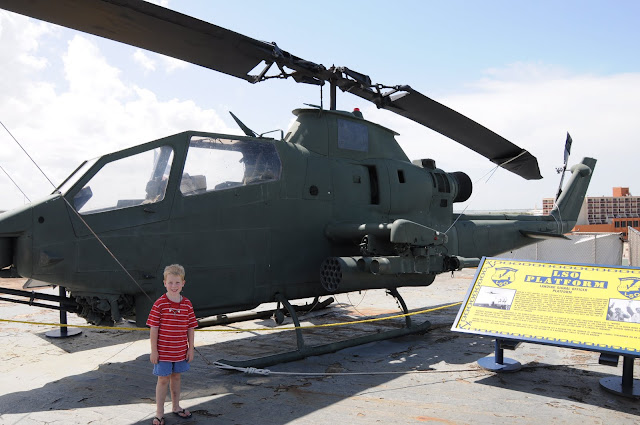 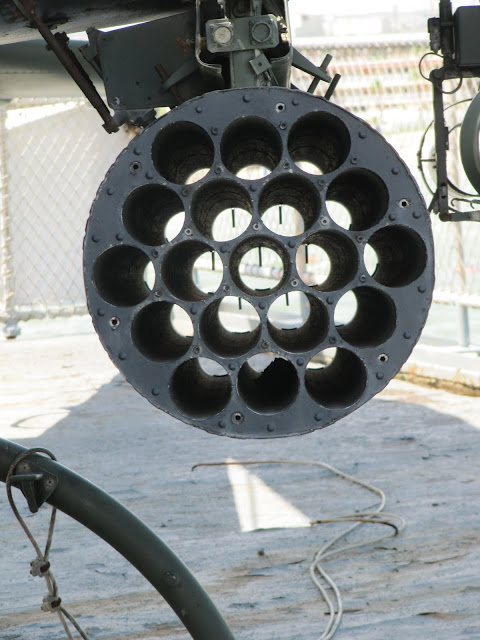 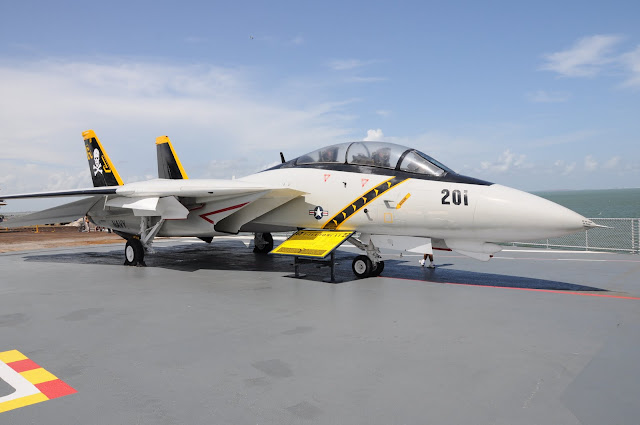 Nicholas had to check out the twin gun mount. 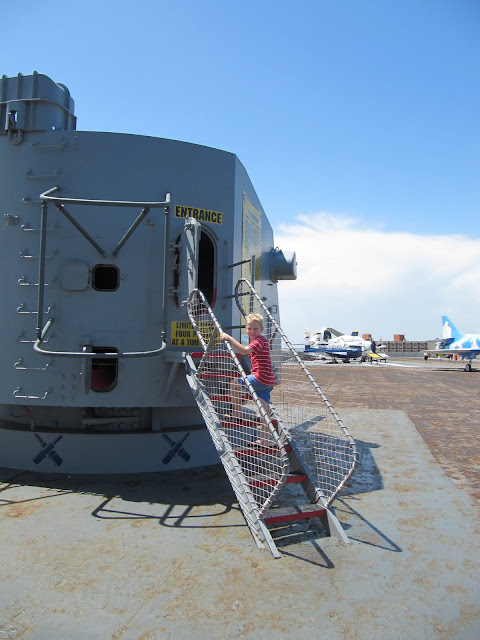 During war, this little gun mount room would hold 4 tons of equipment and 11 crew. There was a video playing on a screen that made you feel like the captain was talking right to you, as a crew member in a time of war. Sirens were going off on-screen and he wanted the guns loaded right away. The kids were mesmerized but all the action, except that Rachel didn't like the sound of the siren so she put her fingers in her ears and said, "loud". 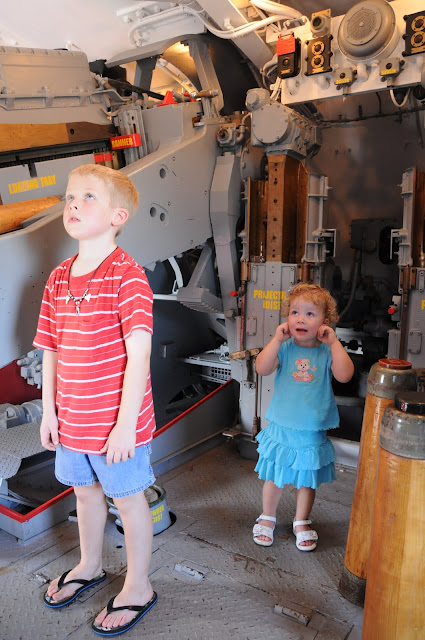 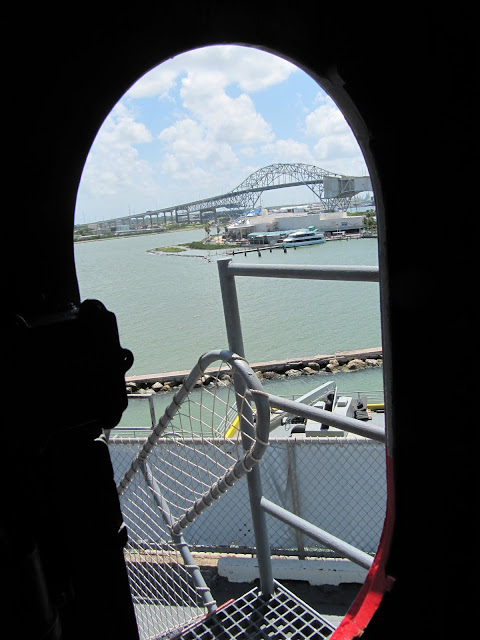 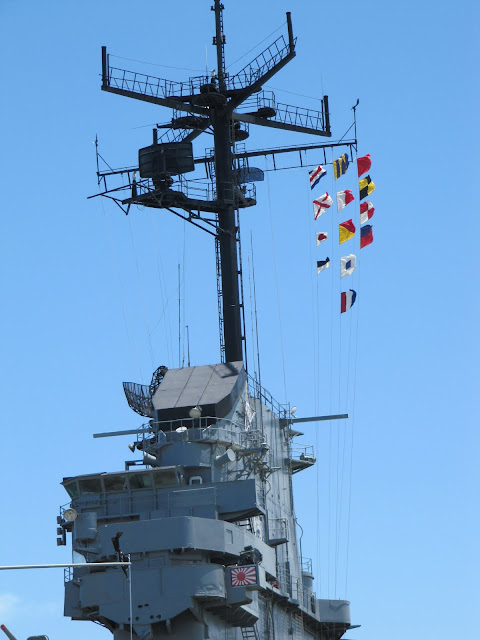 It was interesting to see the log of Japanese vessels that the U.S.S. Lexington took down in WWII. The Lexington was nicknamed "The Blue Ghost" by the Japanese because they reported it having been sunk many times but it always appeared again to continue to the fight. 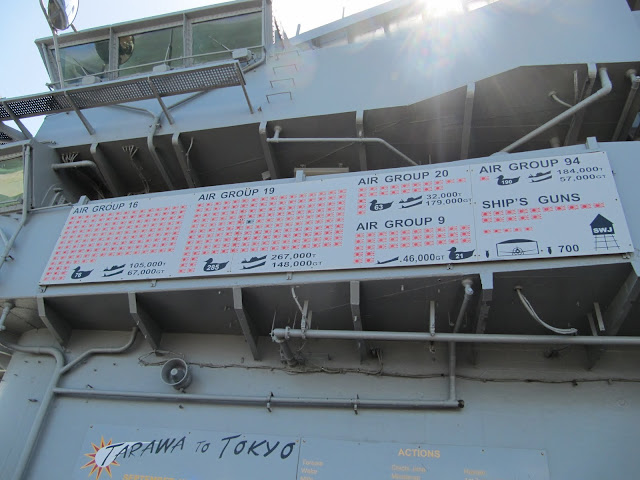 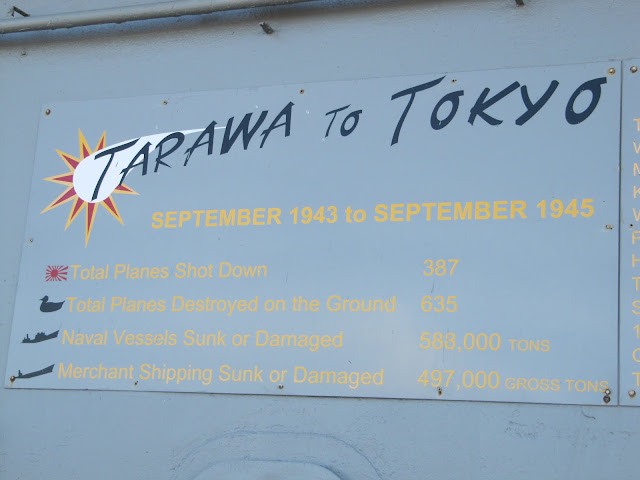 I really enjoyed our tour of the Lexington. Back in high school, I joined our naval ROTC program so I could get out of having to go to P.E. I wore the little ROTC uniforms, learned to march with a rifle while singing cadence, and learned to twirl color guard flags. I also took some amazing trips with the group to learn more about military history, particularly naval history. For a (very) brief time, I considered joining the Navy just because I enjoyed all of the things I had done and learned in ROTC. Fortunately, I came to my senses but I still enjoy military history as well as any history involving the formation of our great nation and I love to share this and instill this love in my children. 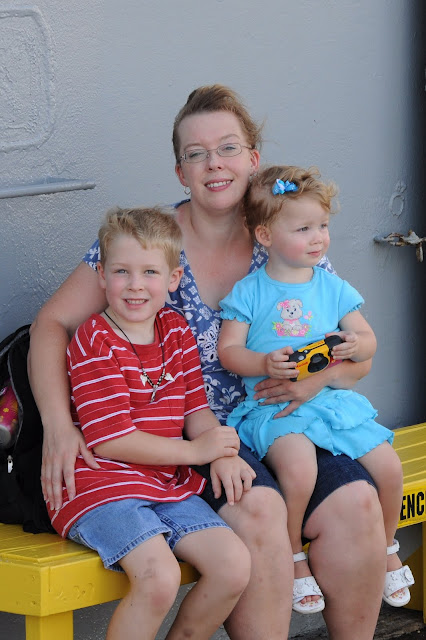 We wrapped up our stay on the Lex with a quiet lunch and cherry icees on the fantail. 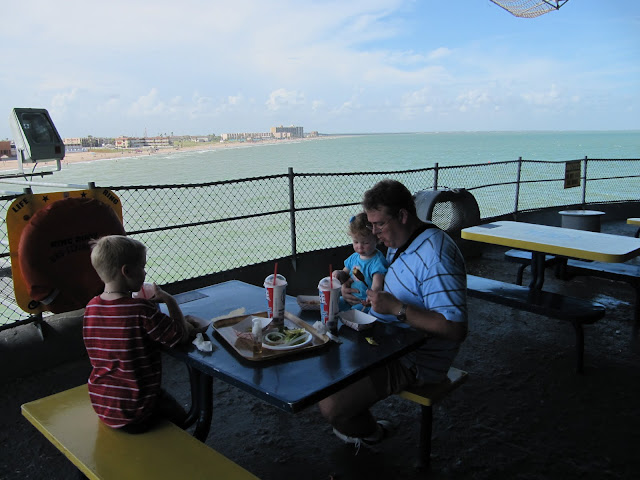 Until the stalking began again. Nicholas was sure that this bird had followed us from the beach on Padre Island because he knew we would give him food. 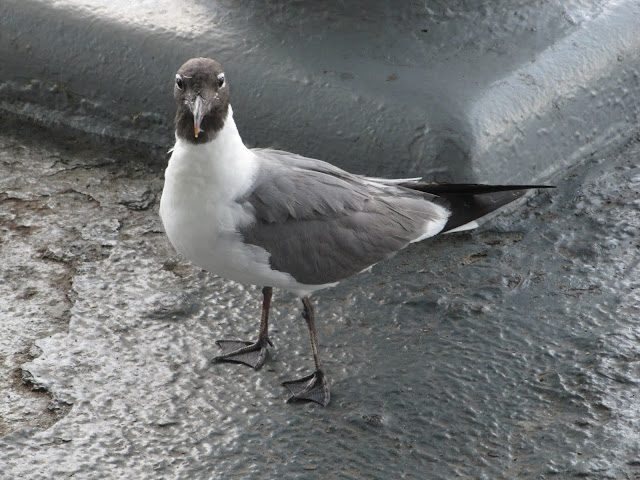 at July 20, 2010
Email ThisBlogThis!Share to TwitterShare to FacebookShare to Pinterest