Prepare for Takeoff At the Astronaut Training Center 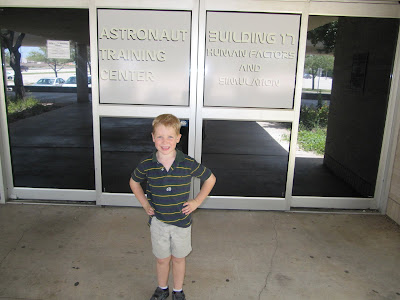 We spent the morning at the Astronaut Training Center in North Richland Hills. We all had fun. The activities are geared for ages 6 and up so Rachel spent a lot of time in her stroller. But Nicholas' training was fun to watch so she actually seemed to have a good time too. I did let her out of the stroller a few times so she could try to copy some of the things she had watched big brother do in his training. 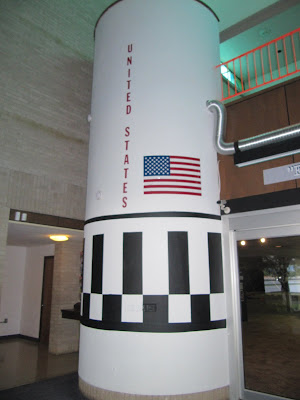 We started training in the Countdown Theater where we took a ride on a historical video tour of America's race to space. We learned of the challenges that scientists and engineers had to overcome in the face of the intense pressure and scrutiny given to the Apollo missions past and future. It was cool because we got to see video of Neil Armstrong and even Alan Shepard who, we learned at NASA, was the first American in space.

Then Nicholas was trained on how to use the reduced gravity simulator. Astronauts have to train for walking around in a reduced gravity environment such as Mars where the gravity is 38% of the gravity of Earth or the Moon where it is only 16.67% of the Earth's gravity. 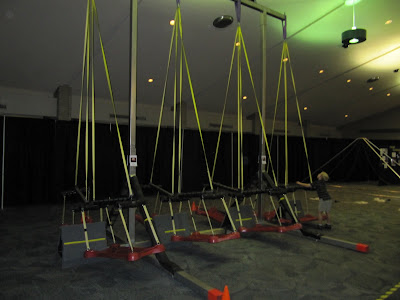 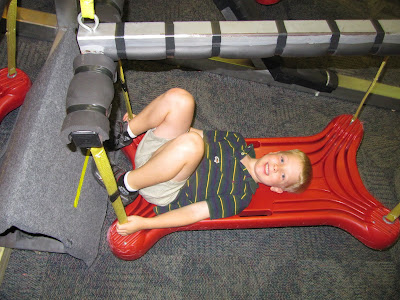 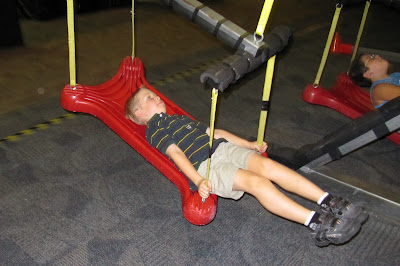 After watching Nicholas and the other kids do this for quite a while, she insisted on trying it too. She knew how to get into position but just stopped at that point. 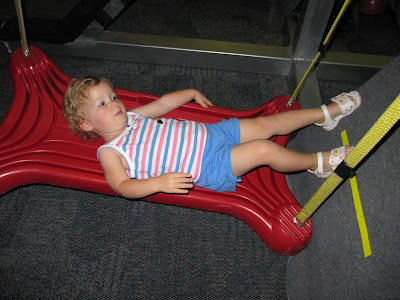 There were lots of educational boards around the training area with pictures and information about space and astronauts. We learned about the moon and then Nicholas got to use the lunar landing simulator. First he landed the lunar module and then controlled his character to exit the craft and walk on the moon. He liked this a lot. 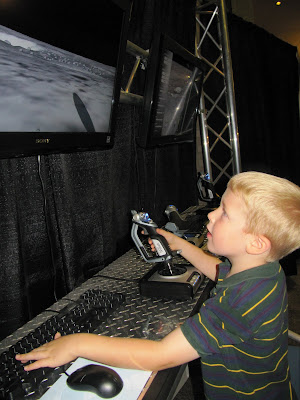 Rachel liked trying to press the keys on the keyboard. 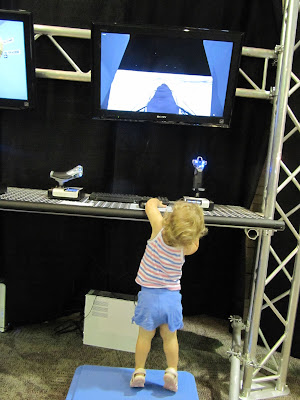 Next Nicholas was trained on the zero gravity simulator which gives the feeling of zero gravity in 2 dimensions. This was a rather impressive contraption and definitely one of Nicholas' favorite activities here. 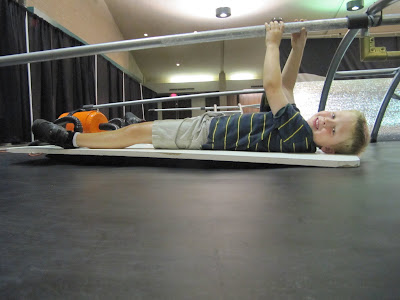 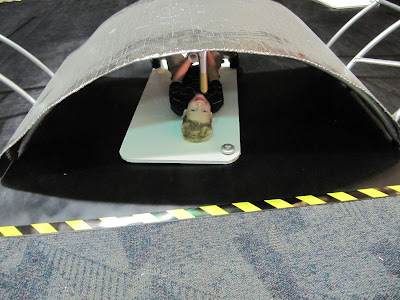 Rachel watched from her stroller and here's what she had to say after Nicholas finished...

Next it was time to don a spacesuit and walk on the moon! 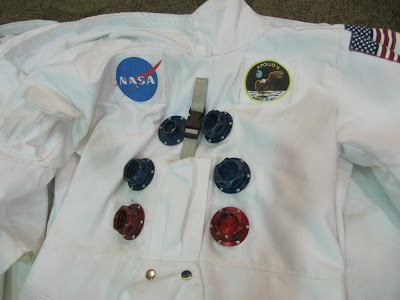 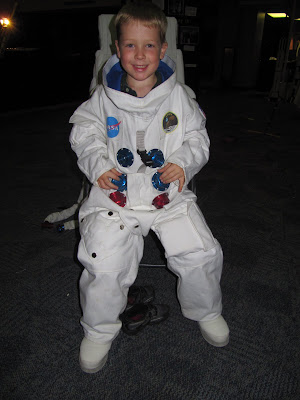 Getting his air tank and hoses attached to his suit... 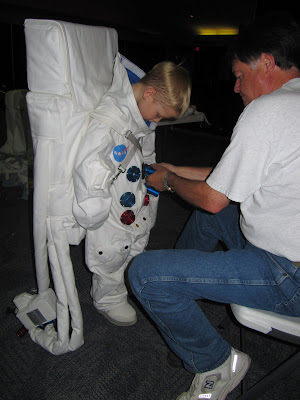 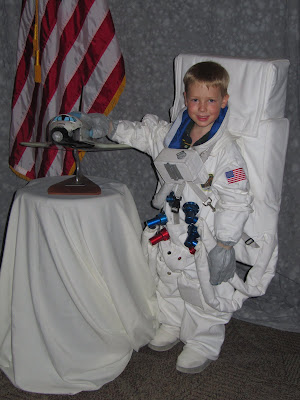 Nicholas descends the ladder from the Apollo and approaches the moon... 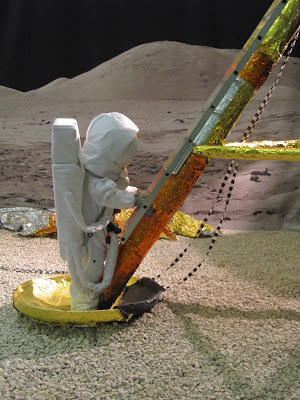 One small step for man, one giant leap for mankind... 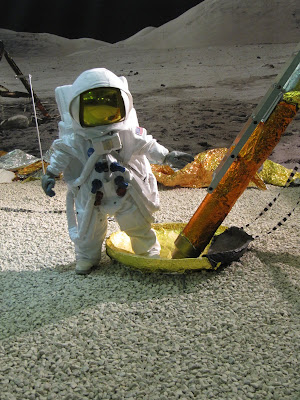 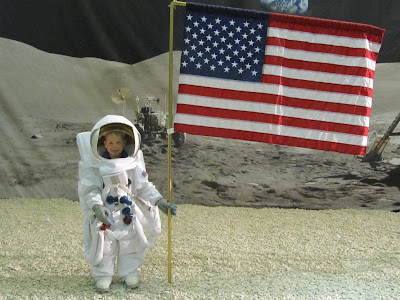 Reading the plaque that the astronauts of Apollo 11 left on the moon. 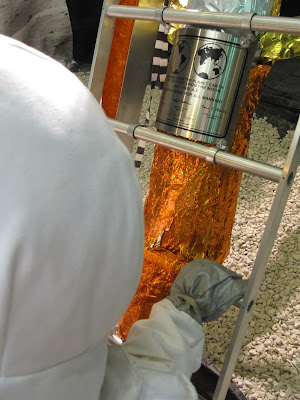 Just for informational purposes, here's a image of the plaque.

Picking up moon rocks with a long "grabber"... 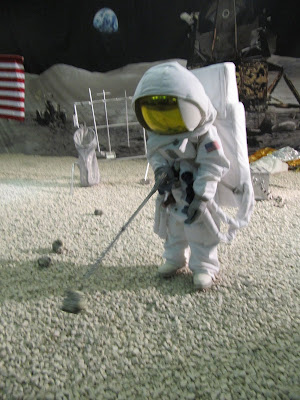 Nicholas had a lot of fun with the R/C rover. 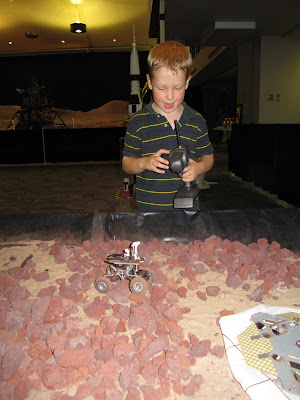 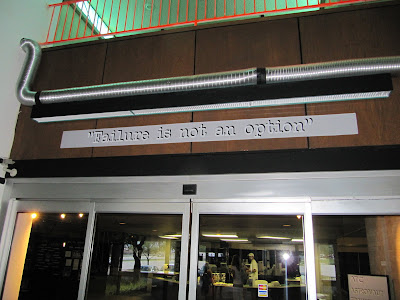 And to quote the famous words of Neil Armstrong...

Astronaut training for your little one costs $15 and it was worth it. We were there for over three hours and had a great time. The Astronaut Training Center is located at 6720 NE Loop 820, (SE Corner of 820 & Rufe Snow Dr) in North Richland Hills, TX. They are open from 10:00 - 3:00. Also, they are only open during the summer so if you want to go, get going or else you'll have to wait until next summer. You can call them at 817-788-2926 to find out their exact schedule and last day of operation for this summer.