A Little Dancing in Longview

Our trip home was rather uneventful. Fortunately the kids got to catch up on some sleep. 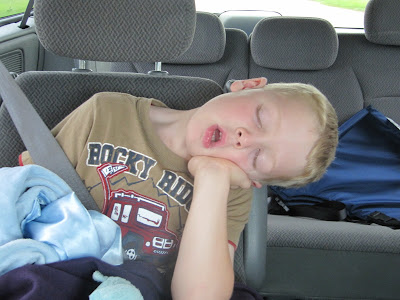 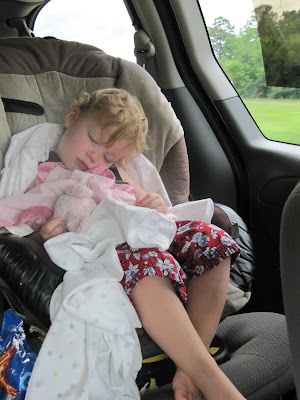 When we are on a road trip, Stuart like to get there with as little stops as possible. We have made the 8-9 hour trip from Dallas to Baton Rouge many times with only one stop for gas and lunch. But with two little ones with us, our trip now requires multiple stops for potty breaks, walking off the grumpies, diaper changes, etc. We have come up with our usual places to stop but now and then an emergency potty break has us stop somewhere new. So was the case today as we entered Longview and pulled off at exit 596. We could have stopped at the simple gas station but decided to stop at the larger gas station that also had a restaurant in hopes that they might have a larger bathroom that actually had a baby changing table. This was all in one building so I'm not sure what to call it but there was lots of stuff going on. 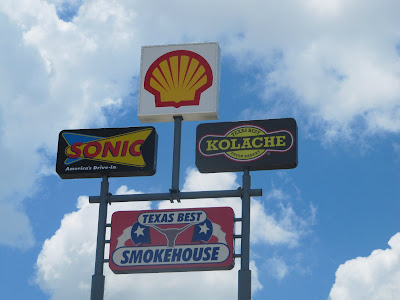 The menu and order board for Sonic was out at the gas pumps so you could order and pay for your food, pump your gas, and have your food delivered to you so you are back on the road in no time. What a neat idea. 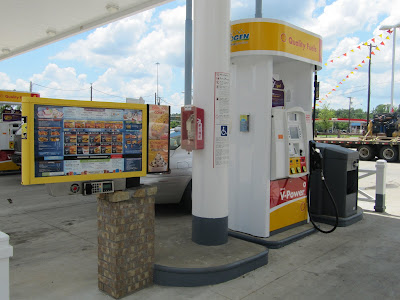 Of course, this would never work for us since every possible stop requires a bathroom break for either a potty or a diaper change. So we all headed inside. As we approached the door, the kids started dancing to some country music that was playing outside. Now that's a good way to let them get the wiggles out after sitting in the van for hours at a time!

Inside we found a delightful place to stop to get our minds off the road. Of course, there was tons of food! 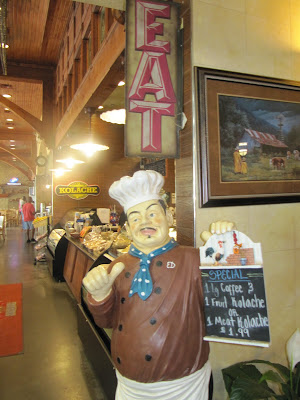 Texas Smokehouse BBQ ribs or sandwiches and all the great fixin's to go with it. 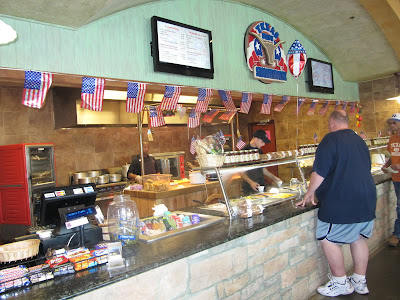 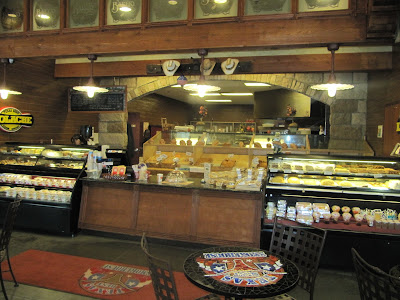 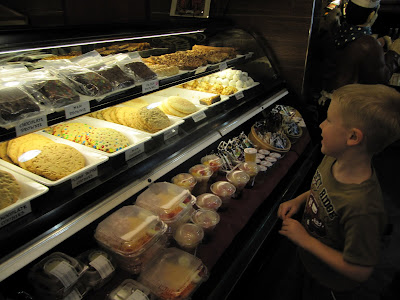 Cases upon cases of all different flavors of beef jerky and free samples given with a smile. We had to get some Honey Bison Jerky. 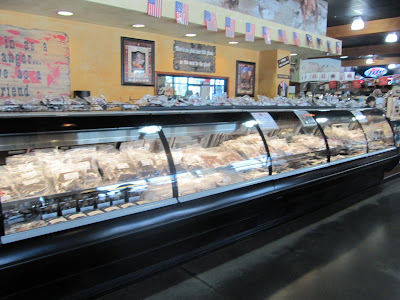 There were walls of refrigerated cases with every kind and color of drink imaginable. 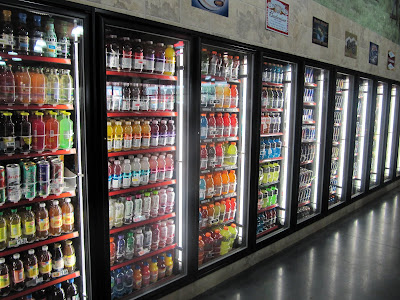 And then there was the Beer Cave. We don't drink beer and Nicholas has no idea what beer is. But at the sound of "cave" he just had to check it out. That was all he could talk about as he went to the bathroom, "Where's the beer cave?" I'm sure other parents were giving us a curious eye as our 6 year old was asking for the beer cave!

We tried to explain to the boy that it isn't going to be the kind of cave he was imagining but there was no point in trying to dissuade him. So we let him check out the beer cave. The doors magically opened for him. 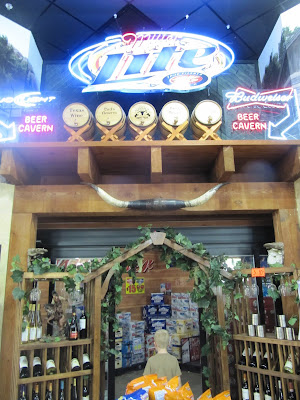 The cave was quite cold and Nicholas loved the cardboard delivery guy that had icicles hanging off of him. 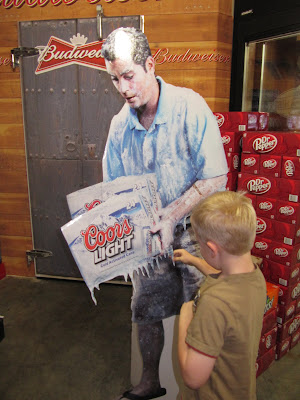 Ok, cave was confirmed to not be as exciting as he expected so he was off to find more fun things to look at. Everywhere you looked in this store, there was something neat to see. 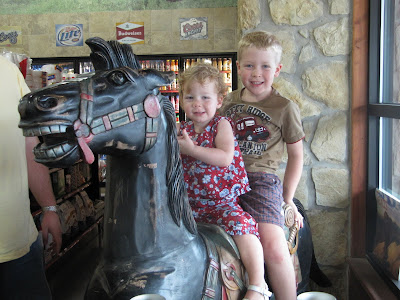 Caramel corn shaped like a real ear of corn. I really almost bought it just because it was so cute. 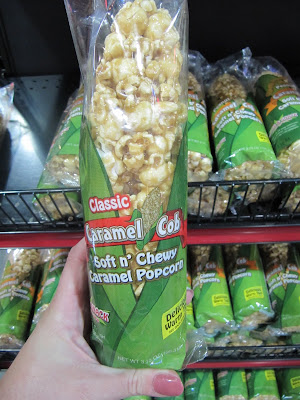 There were rows and rows of branded snacks like trail mix, banana chips, gummy bears, etc. 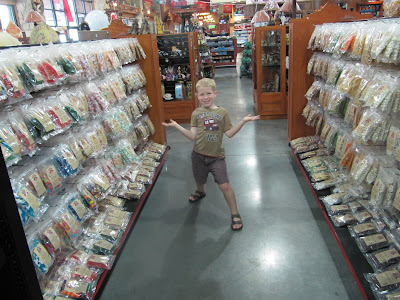 And what Texas home would be complete without a wine bottle holder like these! 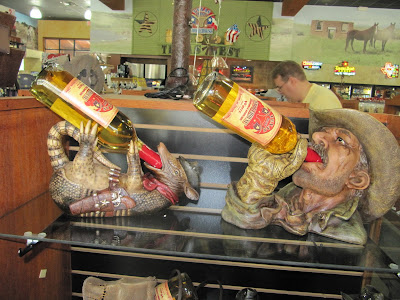 And just in case you feel the urge to buy a cowboy hat as you travel through Texas... 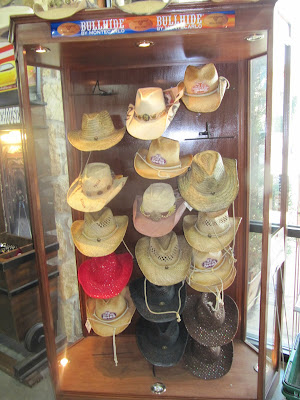 Nicholas found a bell with a sign that read, "If you are WOW'D with the place, Ding the Bell", so he did! 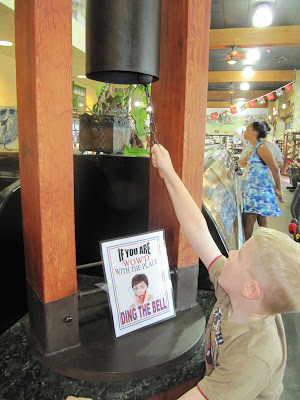 Sitting in some rocking chairs before getting back in the van for a few more hours... 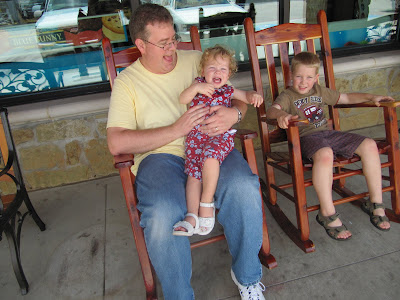 We loved this rest stop and will certainly try to plan a stop here next time we go to Louisiana. I can just see it now. I'll tell my kids, "Can you please just hold it until exit 596?"
at July 06, 2010
Email ThisBlogThis!Share to TwitterShare to FacebookShare to Pinterest